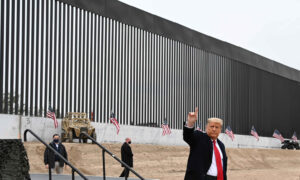 Former President Donald Trump might visit the U.S.-Mexico border in the midst of a surge of illegal immigration in recent months, according to advisor Jason Miller.

President Joe Biden in January moved to dismantle several of Trump’s immigration-related rules, which some Republicans and Trump have said led to the spike in illegal immigrants and unaccompanied children arriving at the Southern Border.

“I could see him doing that soon,” Miller told The Michael Berry Show in an interview on Thursday. He added: “Not immediately but I could see a trip, some point in the future here, but it is something that [former] President Trump is really concerned about.”

During his campaign in 2016, Trump focused heavily on curbing illegal immigration and said he would make the construction of the border wall a key agenda item. In his final days in office, Trump visited the wall in Texas and touted its construction.

Biden in January suspended the building of the wall and said in his executive order that it is wasteful spending. On Thursday, the president claimed that the surge started during the Trump administration and said there are surges “every year”—namely during the winter before the hot summer months.

Biden also defended his approach and said the administration is essentially providing humanitarian service. He also asserted that the “vast majority” of families arriving at the border are being sent back to Mexico.

“We’re trying to work out now with Mexico their willingness to take more of those families back,” Biden said.

In February, a report from the U.S. Customs and Border Protection found that approximately 59 percent of migrant families were allowed to stay in the country pending a final decision about whether they would be deported. About 79 percent of single adults were deported last month, the report found.

“I make no apologies for ending programs that did not exist before Trump became president that have an incredibly negative impact on the law, international law, as well as on human dignity,” Biden said.

Meanwhile, Miller told Berry that Trump has not visited the wall since he was in office because he wants Biden to “fail on his own,” adding there is a “very fine line” between criticizing and showing off. Elaborating further, Miller said Trump told him that the current surge in immigration would not have occurred if he were in office.

Federal officials have been scrambling to provide housing for unaccompanied children who come across the border. This week, Rep. Henry Cuellar (D-Texas) released images from a crowded Border Patrol overflow facility in Donna, Texas, saying that the agency needs to turn over the children to Health and Human Services.

Secy. Blinken: All American citizens, Afghan citizens with valid travel documents will be allowed to leave

4 Recipes That Should Have Never Gone out of Style