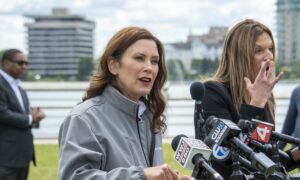 A federal jury on April 8 acquitted two of the four men charged with conspiring to kidnap Michigan Gov. Gretchen Whitmer in 2020. A mistrial was declared for the others. Fox News correspondent Benjamin Hall wrote on Twitter that he suffered severe injuries in Ukraine. In now-deleted tweets, Hall said, in part, that he lost “half a leg” and “a foot on the other,” adding that he is lucky to be alive. He didn’t explain why the tweets were deleted.

Rep. Waters attacks Sen. Feinstein for not supporting the elimination of the filibuster