Ukrainian soldiers load the surviving equipment at a destroyed Ukrainian military facility outside Mariupol, Ukraine, Thursday, Feb. 24, 2022. Russia has launched a barrage of air and missile strikes on Ukraine early Thursday and Ukrainian officials said that Russian troops have rolled into the country from the north, east and south. (AP Photo/Sergei Grits)

Ukrainian President Volodymyr Zelensky ordered general mobilization amid the Russian invasion. He signed the decree on Thursday, saying all fighting-age men in Ukraine must show up at recruitment facilities to join the army.

The order mobilizes Ukraine’s conscripts and reservists across all branches of the military. Zelensky also created the role of ‘Supreme Commander-in-Chief,’ putting him in control of all Ukrainian armed forces and law enforcement agencies.

“Dear citizens of Ukraine. what we have heard today are not just missile blasts, fighting and the rumble of aircraft,” stated the Ukraine President. “This is the sound of a new Iron Curtain, which has come down and is closing Russia off from the civilized world. Our national task is to make sure this curtain does not fall across our Ukrainian land, but at Russian homes.”

Despite the devastating assaults, U.K.’s defense secretary expressed hope, saying Russia has failed to achieve their day one goals. Conflicting reports from Ukraine suggest Russian forces are advancing into Ukraine’s Southeast and are closing in on the capital of Kiev.

Meanwhile, over 130 Ukrainian nationals have reportedly died on the first day of the Russian invasion and Zelensky said Russia has marked him enemy number one.

Thousands of Ukrainians have been taking shelter in underground subway stations as Russia continues its invasion. Families packed their belongings and gathered in metro stations in Kiev and other shelters throughout the country.

????????⚡️???????? People flee into the Railway Station of Kiev, while warning sirens sound in the background. #Ukraine pic.twitter.com/NE61ofTb2G

Video inside Kiev’s railway stations show crowds, including children and senior citizens, cramped together with many sleeping on the ground. Residents were forced to flee their homes as explosions rocked the country.

“We woke up to an explosion  at 4.20 a.m. near our house, an aerial rocket was shot down and a nearby house caught fire,” said Alyona Tkachenko, a Kyiv resident. “And there were many victims. And we were waiting until 7.00 a.m. in our apartment, in the corridor, in the bathroom until the end of curfew, so we can come here.”

Residents were told the subway stations are some of the safest places as they double as bomb shelters. Meanwhile, western allies reportedly believe the Ukrainian capital may fall to invading Russian forces. That’s according to multiple sources citing a senior western intelligence official on Thursday.

People lie in the Kyiv subway, using it as a bomb shelter in Kyiv, Ukraine, Thursday, Feb. 24, 2022. Russia has launched a full-scale invasion of Ukraine, unleashing airstrikes on cities and military bases and sending troops and tanks from multiple directions in a move that could rewrite the world’s geopolitical landscape. (AP Photo/Emilio Morenatti)

MORE NEWS: Putin Threatens Unprecedented Consequences For Any Attempt To Interfere With Invasion Of Ukraine 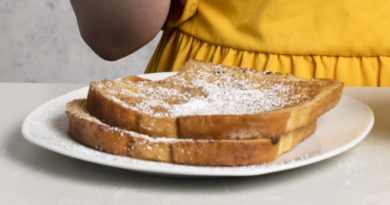