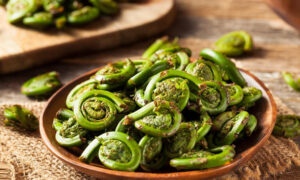 Spring’s arrival brings new seasonal produce, but some of it goes as fast as it arrives. Fiddleheads are an example of a springtime delicacy with a short season. The shoots can be found at farmer’s markets and grocery stores from April to June and they make a great addition to a variety of spring and summer meals.

But before buying fiddleheads you need to know how to prepare them — the asparagus-like ingredient can easily give you food poisoning if it’s not correctly cleaned, cooked and stored.

The curled shoots are foraged from ostrich ferns (a type of plant) and used as vegetables for cooking. Fiddleheads can grow on ostrich ferns in clusters ranging anywhere from three to 12 fiddleheads per plant. They’re very popular in Canada and parts of the United States, where fiddleheads are considered a delicacy. But eating raw or undercooked fiddleheads can cause food-borne illness, so you should know how to cook the shoot before buying them come April.

How do you clean fiddleheads?

To clean fiddleheads, add them to a colander and run them under cold water for about one minute. Once thoroughly rinsed, place them in a bowl filled with cold water. Repeat the rinsing and soaking process until the brown husk that covers the fiddleheads is completely removed.

How do you store fiddleheads?

How do you cook fiddleheads?

Once the fiddleheads are clean, you can begin the cooking process. Start by bringing a pot of salted water to a boil then add the clean fiddleheads to the pot, making sure they’re fully submerged. Bring the water back to a boil and let the fiddleheads boil for 15 minutes.

Alternately, if you want to steam the fiddleheads, bring a saucepan filled with about one inch of water to a boil and top it with a steamer filled with the clean fiddleheads. Cover the steamer with a lid and steam the fiddleheads for 10 to 12 minutes. Once cooked, serve the veggie with your desired toppings. We recommend serving the spring delicacy with pine nuts, pecorino cheese and lemon zest (click here for recipe).

How to cook fiddleheads was a popular search query in the United States during spring and summer last year, but if you’re nervous about preparing them incorrectly, there are plenty of other seasonal fruits and vegetables that are just as tasty. Click here for to find out what produce you should buy this spring and how to cook with it.