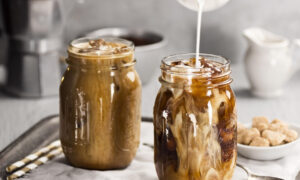 Ordering coffee isn’t a walk in the park anymore. Experienced drinkers are likely familiar with classics like lattes, cappuccinos and macchiatos — and then there’s cold brew. While it’s now a coffeehouse and grocery store staple, many people aren’t even sure what it means.

Just based on appearances, cold brew looks just like iced coffee — but it’s not the same. Iced coffee is made by brewing hot coffee, letting it cool, and then pouring it over ice. Basically, it’s just standard coffee that someone put in the fridge. The whole process is relatively simple and yields the perfect cool drink for a hot day.

Cold brew, on the other hand, is made without heat. It’s made by steeping ground coffee in cool, filtered water for hours at a time, which nixes much of the acidity you get with drip coffee. The end result is naturally sweeter and smoother.

“It’s all about the water temperature,” Chad Moore, manager of global coffee and tea education at Starbucks, told The Daily Meal. “With drip coffee, we use water that’s between 195 and 205 degrees to really extract flavor. That’s why it happens so fast, within four to five minutes. With cold brew, we’re using cold water. So the water that’s cold takes a lot longer to extract flavor. It’s usually around anywhere between 20 to 24 hours steep-time. You have to really prepare ahead for cold brew.”

Even though there’s no caloric difference between the two, the fact that cold brew has a less acidic and slightly creamier profile makes it easier to cut back on cream and sugar, two additions that can increase your coffee’s calorie count by hundreds.

There is a slight contrast in caffeine content, though. Because the coffee grounds are in longer contact with the water, cold brew contains more caffeine than iced coffee. For example, one 16-ounce iced coffee at Starbucks contains 165 milligrams of caffeine, while a cold brew of the same size has 205 milligrams. Now that you know the differences between iced coffee and cold brew, make sure to brush up on the differences between the Americano, flat white, macchiato and other coffee drinks.