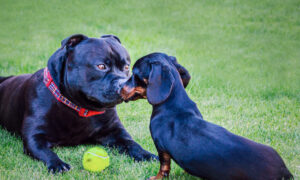 “There are strong robust signals in the brain that are signatures of an interactive social gaze,” says Steve Chang, associate professor of psychology and neuroscience at Yale University, a member of the Wu-Tsai Institute and the Kavli Institute for Neuroscience, and the senior author of the study.

The phenomenon of extracting meaning in the gaze between two people has been documented in art and literature for millennia but scientists have had a difficult time uncovering how the brain accomplishes such a subtle feat.

They’ve extensively studied the neurobiology of social perception, usually by giving brain scans to individuals as they are presented with specific static images, such as angry or happy faces or direct or averted gazes. However, the interactions of two individual minds as they dynamically and reciprocally extract information from each other’s eyes are difficult to tackle.

Chang’s lab overcame this obstacle by monitoring the brain activity of monkeys while simultaneously tracking the eye positions of two animals. This enabled them to record a large array of neurons as the animals spontaneously gazed at each other.

“They were spontaneously engaging in social interactions while we examined neural firing,” Chang says. “Importantly, we were not imposing any tasks, so it was up to them to decide how and when they would interact.”

The brain regions in which neuronal activation took place provided hints into how the brain assesses the meaning of the gaze. Surprisingly, part of the network activated during social gaze interaction included the prefrontal cortex, the seat of higher-order learning and decision-making, as well as the amygdala, the center for emotion and valuation.

“Multiple regions within the prefrontal cortex, in addition to the amygdala, are recruited to compute selective aspects of interactive social gaze, suggesting the importance of a more contemplative role during social gaze interaction,” Chang says.

These areas in the prefrontal-amygdala networks activated during the processing of social gaze interaction are also known to be disrupted in cases of atypical social conditions, such as autism. This attests to their importance in achieving feelings of social connectedness, Chang says. Social gaze interaction likely serves a critical role in shaping social connectedness, he adds, and the prefrontal-amygdala networks might make that happen.

“The fact that interactive social gaze neurons are found widely in the brain also speaks to the ethological importance of social gaze interaction,” Chang says.

The research appears in the journal Neuron.

This article was originally published by Yale University. Republished via Futurity.org

Officers Did Not Commit Crimes in Fatal Shooting of Rayshard Brooks: Special Prosecutor