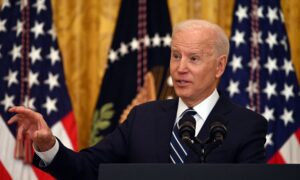 When asked about the prospect of taking executive action, Psaki responded with, “Yes.”

“I can’t give you an exact time frame, in part, because they have to go through a review process, which is something that we do from here,” Psaki told reporters at the White House.

“I will note that when we, when the president was the vice president in the Obama-Biden administration, he helped put in place 23 executive actions to combat gun violence,” she added. “It’s one of the levers that we can use that any federal government, any president, can use to help address the prevalence of gun violence and address community safety around the country.”

On Thursday, during the president’s first news conference, he hinted at taking action but pivoted to his infrastructure agenda items.

“It is time for Congress to act,” the vice president said in an interview with CBS News on Wednesday. “It’s simply about saying we need reasonable gun safety laws. There is no reason why we have assault weapons on the streets of a civil society. They are weapons of war. They are designed to kill a lot of people quickly,” she added.

But gun rights organizations such as the National Rifle Association and Gun Owners for America have raised red flags about Biden’s proposals, arguing they would violate the Constitution’s Second Amendment.

“In an apocalyptic environment where the filibuster has been eradicated, you can expect to see a Democrat Congress ramming through gun bans, gun owner registration, and more,” Gun Owners for America said days after Biden’s inauguration.

Meanwhile, it’s possible that courts could overturn any potential executive rule. This week, the U.S. Court of Appeals for the 6th Circuit ruled that a federal ban on bump stocks handed down by the ATF is likely illegal, while ordering that the ban be placed on hold.

Fowl Fodder Fallacies—What to, and not feed chickens