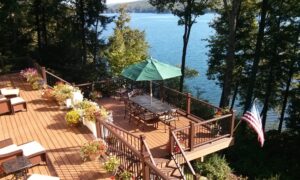 Deck collapses happen all the time, and many of them never make the news.

Several years ago, I attended an all-day training session put on by a leading manufacturer of metal structural connectors for decks, homes, and other structures. They estimated at the time that over 80 percent of the decks in the United States are structurally deficient and ticking time bombs. That speculation is staggering, and it should immediately put your head on a swivel.

My youngest daughter’s roommate was a victim of one of these deck collapses. She walked out onto a small deck four years ago and it detached from the building. Both the woman and the deck crashed 12 feet to the ground. She was rushed to the hospital with a ruptured spleen and a broken neck. She survived but is now partially disabled.

You’ve undoubtedly heard the saying a chain is only as strong as its weakest link. The weak link of the typical deck is where it attaches to the house. This deck structural member is called a ledger board. In reality it’s not much different from a steel beam you might see in your basement or the ones that support bridges that you drive under in your city or town.

An enormous amount of weight is transferred to this ledger board. In most cases, half the weight of the entire deck, all the furniture that’s on it, and the combined weight of you, your family and friends is pushing down on this single board. It can be thousands of pounds

But it gets worse. Not only is the weight pushing down, but if you and your friends start dancing on the deck creating a harmonic side-to-side motion, you can exert a force that begins to cause the deck to pull away from your home. This is a recipe for disaster if the deck ledger board or the untreated wood on the exterior of your home has rotted because the ledger board was not installed correctly. This is why my daughter’s roommate was lying unconscious on the ground that fateful day.

It’s important to realize that treated lumber can and does rot. I’ve witnessed it myself. Each day when I go out for a walk, I pass by treated-lumber guardrail posts that are as rotten as logs laying in the forest just 50 feet away. Keep in mind that not all treated lumber has the same amount of chemical preservatives. What’s more, how do you know if the wood was properly treated? Any number of things could have gone wrong at the treatment plant. Inferior products of all types are made all the time. This is why there are product recalls on an almost weekly basis.

Do you, by chance, recall some of your high school chemistry? Did you do any lab experiments about galvanic reactions? Each time it rains on your deck, a toxic brew is created. The rain leaches copper from the treated lumber. This liquid attacks any exposed steel or iron. If your deck was built using inferior fasteners with a paper-thin coating of zinc, they might be corroding as I type this. This same corrosion can be happening with any of the joist hangers and other structural framing connectors.

All of this is exacerbated if your deck is located in a marine environment. Sea salt is also corrosive. I went on my first cruise a few years ago and attended a talk given by the ship captain and his top two crew members. I’ll never forget when they were talking about the constant battle they face with the seawater. The captain said in his heavy Eastern European accent, “The sea eats iron and men.”

You need to up your game should your deck be exposed to marine conditions. If it were me, I’d use as much stainless steel as I could find when it comes to fasteners, bolts, connectors and so forth. Whatever isn’t stainless steel should be double-dipped hot galvanized metal. I’d also do annual inspections of the deck to ensure corrosion is minimal or nonexistent.

The one trick is to use fire cuts on the joists, something master carpenters figured out well over one hundred years ago when they installed floor joists in solid brick buildings. As cities got bigger, brick buildings got taller and fire fighting became more professional, it became crystal clear why firefighters were getting killed when brick walls collapsed. The walls of the buildings that didn’t have angled fire cuts on the ends of the joists tipped outwards, crushing fire fighters when the floor joists burned through and broke in two inside the buildings. This can be adapted to deck construction. The second trick is to use a kick-out on the all-important flashing that covers the top of the deck ledger board.

I’ve prepared a full-color illustration of showing how I’d install your deck ledger so it doesn’t rot or pull away from your home. This document also contains links to the best deck hardware and fasteners, the all-important special connecting anchors, and the absolute best treated lumber to use when building your deck ledger board. You can get all this at: https://GO.askthebuilder.com/1451