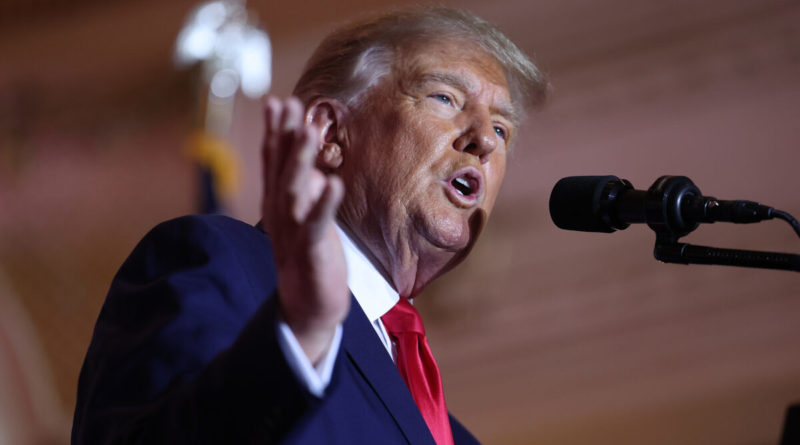 With the midterm elections finally concluded in the usual string of Democratic successes in late-counted voting, the United States has reached a position of unprecedented political immobilization.

The Trump phenomenon isn’t dead, but it has stalled. The opposition to him from the Democrats and most of the pre-Trump Republicans is so fanatical that any hint, even a complete conjuration, of his starting down a path back to the White House unleashes a frenzy of vilification in the overwhelmingly anti-Trump national political media and a reactivation of the Democrats’ prosecutorial apparatus, officially the Department of Justice, which has essentially been a Trump destruction service for the last six years.

Any plausible sighting of the former president in candidate mode creates such an oppressive aura of chaos in American public life that the country swiftly tires of it and Trump suffers in the polls. Even those who believe that Trump has been attacked unfairly and was probably illegally robbed of reelection tend to be stampeded into opposing his reelection. This is because only his true loyalists, approximately an apparently immovable 40 percent of the voters (despite the Never Trump conviction that their numbers have been cratering for two years), can stand the cacophony and the sturm und drang that accompanies even the suspicion that Trump is thinking about regaining the great office from which he and his scores of millions of followers believe he was unjustly evicted.

It was the almost certainly spurious raid on Mar-a-Lago, raising the absurd prospect of prosecuting the ex-president under the Espionage Act, that cut President Joe Biden’s disapproval ratings in half, not his sudden supposed string of successes led by the nonsensical misnomer of the Inflation Reduction Act. It may be that the concentrated pitch to youth in the abortion debate, the reduction of penalties for improper marijuana use, and the proposed student loan forgiveness helped, but the Democrats’ silver bullet is an attack upon Trump and his invariably pyrotechnic response, no matter how ludicrous the attack and obscure or discredited the assailant.

The midterms demonstrated that a fear of the return of Trump counterbalances the three-to-one majority among Americans that believe that the country is going in the wrong direction and produces the current result: a sharply divided Senate and a paper-thin Republican majority in the House of Representatives. It’s the best the voters can do at voting against both parties. That’s the conundrum: The Democrats are incompetent, and with Trump, it’s unbearably contentious.

Donald Trump himself is at a crossroads. He was easily, in policy terms, the most successful president since Ronald Reagan. By repositioning the Republican Party to pitch to the minorities and lower-income economic echelons by applying traditional Republican capitalism and incentivizing job creation in low-income areas, he effectively wiped out unemployment and regenerated the base of his party.

Despite the endlessly repeated mantra of the current regime that they inherited a “broken” immigration policy, Trump practically eliminated illegal immigration, which in the last two years has ballooned to horrifying and unsustainable proportions while the administration tediously repeats that “the border is closed,” which everyone above the age of 5 and with an IQ in at least double figures knows to be false.

Despite his undiplomatic techniques, Trump also made impressive progress in expanding the Middle East peace process, reining in Iran and North Korea, and shaping up the NATO alliance from its previous status as a fraternity of appeasers and freeloaders.

But his methods were so radical, and his assault upon the sensibilities of the complacent bipartisan Washington establishment sitting on top of a 95 percent Democratic federal government was so fierce, that he was denied the normal credit with voters so successful a president would have received.

We now know that almost all of the complaints that Trump made of the illegal behavior of his opponents were justified: The FBI and the senior intelligence agencies deliberately made themselves tools of the Democratic Party to defeat and then immobilize Trump. The first impeachment was nonsense, as Trump was only asking the Ukrainian president for the facts and not demanding incrimination regarding the Biden family’s commercial activities in that country. And we now know that considerable improprieties may have occurred, which it was entirely appropriate for the then president, as the chief law enforcement agent of the United States, to make the subject of a neutral inquiry.

We now know how comprehensively the social media platforms sandbagged the Trump campaign. And we have long known that the voting and vote counting rules in a number of key and closely contested states were changed, not by the state legislatures as the Constitution requires, but by governors and elected state courts. The unverified status of millions of ballots cast by people other than the ostensible voters in an election where 50,000 votes flipped in Pennsylvania and any two of Arizona, Georgia, and Wisconsin would have given the election to Trump, raises stronger questions about the validity of the result than have attended any American presidential election since 1876 (Hayes and Tilden).

Trump didn’t want an insurrection on Jan. 6, 2021, and the hooligans who vandalized the capital had no connection to him. He no more violated the Espionage Act than Mickey Mouse did, and while his syntax could have been clearer, he hasn’t advocated discarding the Constitution; he made the point that the Constitution had proved inadequate to assure fair elections.

Trump is now being plausibly portrayed as King Lear, but the question seems never to be posed of who wouldn’t be reduced to a mental state approximating that of King Lear if they had been subjected to the systematic and largely illegal harassment and endless synchronized media hatred that Trump has received?

He can reduce the chaos by adopting and adhering to the tenor of his remarks when he announced his campaign for renomination—conciliatory, good-humored, and a comprehensive reform agenda. He has started out as abrasive and easy to deride as possible, to the point that it isn’t clear if he really wants to win. If he does, he will have to be a new and much less controversial Trump. If he doesn’t, he won’t be nominated. In either case, the Republicans will have to learn to fight extended elections and harvest as many ballots as the Democrats, while imposing credible verification. Georgia provided the model for reformed voting and counting methods.

The stakes are very high: The reelection of this feckless, mindless, profoundly inept administration would signal that America has tumbled into a power dive of national decline. Trump must decide if he really wants to win, wants to be a king-maker, or seriously likes being a fading King Lear, grating on most of his countrymen. If Trump can’t raise his game and make himself a less easy target, he would do better to leave it to Ron DeSantis or one of the other excellent Republican potential candidates to finish his work. If the Democrats indict him on some fatuous confected charge, they will commit suicide even before they can induce the country to do so. It’s a stark choice, but it must be made.

This is my last column for The Epoch Times, though I will not be hard to find on other sites. A merry Christmas and a happy and successful New Year to all readers.

China’s Quest in the Indian Ocean

The COVID-19 Response and the Emergence of Illiberalism

Monkeypox became a global emergency due to political correctness