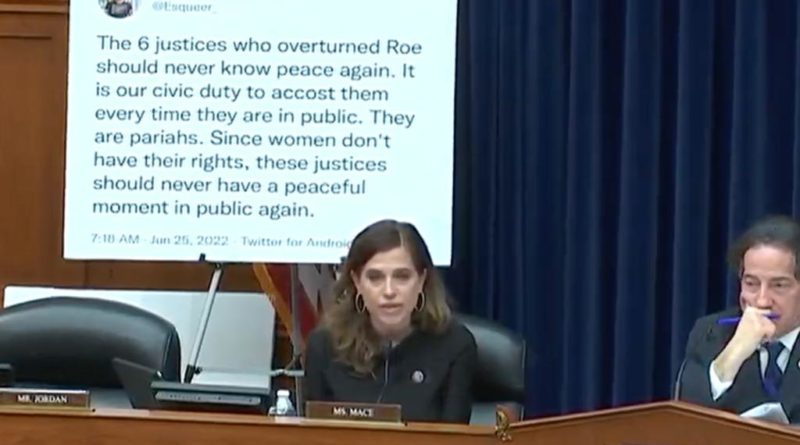 
The woke left loves to dish it out, but sure can’t take it.

Witness Tuesday’s utter humiliation of Harvard Law School’s Alejandra Caraballo by Rep. Nancy Mace (R-SC). Caraballo, a radical transgender-rights activist and legal instructor, was appearing at the House Committee on Oversight and Reform’s hearing on alleged threats to democracy, including — as Caraballo firmly warned — rhetoric calling for targeting of officials over doing their jobs.

Yet, as Mace then proved, Caraballo’s own tweets had called for just that.

In the wake of the Supreme Court ruling in Dobbs, she demanded on Twitter that the “6 justices who overturned Roe never know peace again,” and described it as a “civic duty” for people to accost them in public. She also called the court “not a legitimate court” and an “organ of the far right.”

Sounds pretty anti-democracy to us! The high court is constitutionally mandated to do its best to offer honest decisions, popular or not.

Caraballo attempted a weak deflection, insisting that her words — clearly visible in black and white mere feet away — were somehow being mischaracterized.

No: Mace had her dead to rights. But her inept, dishonest dodging reveals the total hypocrisy of the left on the issue of “dangerous” speech.

Lefties call for lifelong fatwas on anyone they see as having trangressed even while mewling piteously about the danger such rhetoric poses to democracy itself.

In other words, threats aren’t threats when they come from the left. Tell that to Justice Brett Kavanaugh, whose would-be assassin was arrested near his home (Caraballo’s callous remarks came after that near-tragedy.) Or Rep. Steve Scalise, who miraculously survived being shot by a Bernie bro.

Until recently, activists like Caraballo had the help of friendly censors at Twitter to back up their doublethink. That seems, mercifully, to be changing.

But we’d take the public hyperventilation about threats to democracy a lot more seriously if these whiners actually lived by their own rules.

Cuomo book decision is proof nobody fears him in Albany: Goodwin

Preservationists have a vested interest in UWS church fight