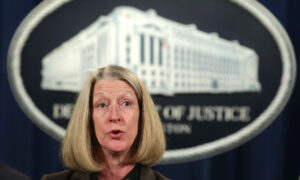 Is a country that rewards failure, corruption, and deceit destined to fail?

This disquieting question comes to mind when one considers how members of the commanding heights of society have increasingly failed—at least on the merits—upwards.

The Biden administration has seen a number of its nominees confirmed, with varying Republican support, in spite of their checkered records.

Samantha Power, the former Obama administration United Nations Ambassador, was found to have made several hundred seemingly unjustifiable unmasking requests—exposing the name of someone incidentally recorded by government surveillance—and apparently lied about one such series of requests, regarding Gen. Mike Flynn, in testimony to Congress. Her inglorious record spans from our shores, to Israel, Syria, and well beyond the Levant. Power was rewarded by being confirmed to head the U.S. Agency for International Development. She is likely to be seated on the National Security Council.

Lisa Monaco, the former Obama administration Homeland Security Advisor, played a critical role in word and deed in propagating Russiagate/Spygate. She was rewarded by being confirmed Deputy Attorney General, where she is expected to take a major role in combating domestic violent extremism. There are indications this effort could lead to the targeting of like-minded political dissenters to the ones wrongfully ensnared in Russiagate/Spygate.

Setting aside Biden administration nominees, word broke this week that Mary McCord, a former senior Obama Department of Justice official responsible for rubberstamping the Carter Page Foreign Intelligence Surveillance Act (FISA) warrant applications, helping oversee the Crossfire Hurricane operation, and like Power, targeting Gen. Mike Flynn, was named to the eight-member amici curiae of the Foreign Intelligence Surveillance Court (FISC). Amicus curiae are responsible for advising the FISC on critical matters, including, ironically, legal arguments advancing the protection of civil liberties. This is the very court she and her colleagues helped repeatedly mislead in violating the civil liberties of Page and myriad others in President Trump’s orbit.

Perhaps this is fitting since the judge presiding over the FISC not only let one of the few people to face any repercussions associated with Russiagate—for having blatantly altered an email to justify the Page surveillance—avoid any jail time, but drafted an opinion declassified this week giving the Federal Bureau of Investigations (FBI) a free pass over related abuses. The FBI, it turns out, has in recent years used FISA-obtained information—that is, information that is supposed to be collected for foreign intelligence purposes—to investigate domestic crimes, including, among other things, “investigations relating to public corruption and bribery.”

Failing upwards is of course a longtime hallmark of government. Remember, our commander in chief is said by one of his longtime former colleagues to have been wrong on every major foreign policy issue. But failing upwards is a phenomenon not limited to the public sector. The media and academia increasingly parallel Washington, D.C. in this regard. One could argue that increasingly, they are extensions of it.

Natasha Bertrand has been one of the most dutiful water carriers for the national security and intelligence officials who foisted Russiagate on the American people. She has hyped everything from the debunked Steele dossier, to the debunked story that Russia was paying bounties to the Taliban to kill American troops, to the debunked claims that Hunter Biden’s laptop contents was Russian disinformation. She was rewarded for peddling propaganda by recently being hired away from Politico by CNN, part of a meteoric rise for a 28-year-old in a profession putatively aimed at exposing truth without fear or favor.

Nikole Hannah-Jones is the purveyor of the New York Times’ pernicious 1619 Project, which, among a mass of dishonest, dubious, and flat out inaccurate claims, included the whopper that America broke away from Great Britain to preserve slavery. Her journalistic malfeasance might end the career of a mere mortal. Hannah-Jones instead won a Pulitzer. The work is being converted into a major docuseries. She was just rewarded further for her slanderous claims about an America whose “true founding” she argued was rooted in the slavery of 1619, rather than the liberation of 1776 that set America on the road to abolition, by being named the Knight Chair in Race and Investigative Journalism at the University of North Carolina’s Hussman School of Journalism and Media. The Biden Department of Education also recently released a proposed rule concerning American History and Civics Education programs explicitly endorsing the 1619 Project.

What are we to make of this smattering of items?

While we might judge political figures on the consequences of their policies for peace and prosperity, or journalists on exposing what the powerful seek to hide, or teachers on the veracity of their scholarship, the institutions these people serve may well not.

They may judge less on the merits, and more on politics, ideology, and faithful adherence to the establishment party line and objectives.

Certainly this makes sense in government. However much progressives might try to argue about that public policy can be boiled down to a technocratic science, the administrative state is definitionally bureaucratic, and dominated by progressives. Perhaps the media and the academy are more prone to politics than other realms as well, particularly given that they too are dominated by the left. Bureaucracies more generally of course are keenly focused on perpetuating their own power, and protecting their own from perceived threats.

But the impact of the hyper-politicization of these areas is particularly acute, given they have disproportionate power and influence over our lives. If the realms of public policy, culture, and education all subordinate merit and outcomes to politics, and progressive ideology—grading and promoting on everything but performance—we will disproportionately pay the price for it.

When politics become not just one thing, but the only thing in the most influential areas of society, it foretells disaster.

This is particularly so when it is not just politics, but Wokeism that pervades all such areas, in the face of foreign adversaries who suffer from no such illusions.

Ben Weingarten is a fellow of the Claremont Institute and co-host of the Edmund Burke Foundation’s “The NatCon Squad.” He is the author of “American Ingrate: Ilhan Omar and the Progressive-Islamist Takeover of the Democratic Party” and is currently working on a book on U.S.–China policy and its transformation under the Trump administration.