“Look at this chorus of entitled white men justifying a serial rapist’s [Justice Brett Kavanagh’s] arrogated entitlement. All of them deserve miserable deaths while feminists laugh as they take their last gasp. Bonus: we castrate their corpses and feed them to swine? Yes.”

That was a 2018 Twitter comment by a Georgetown University political science professor. The university kept her on duty. Her scheduled research leave was advanced in time, which in academia could be considered a reward.

Here’s an April 2022 tweet from a Georgetown law professor:

“We have only one political party in this country, the Democrats. The other group is a combination of a cult and an insurrection-supporting crime syndicate. … The only ethically and politically responsible stance to take toward the Republican ‘party’ is to consistently point out that it is no longer a legitimate participant in U.S. constitutional democracy.”

The university did not respond.

“[L]aw professors and law school deans [should] not support applications from our students to clerk for” [judges appointed by President Donald Trump]. … To work for such a judge indelibly marks a lawyer as lacking in the character and judgment necessary for the practice of law.”

In May 2022, still another Georgetown University law professor used Twitter to defend the illegal protests at the homes of several Supreme Court justices:

“When the mob is right, some (but not all!) more aggressive tactics are justified.”

“Objectively best pick for Biden is Sri Srinivasan, who is solid prog[ressive] and v[ery] smart. Even has identity politics benefit of being first Asian (Indian) American. But alas doesn’t fit into latest intersectionality hierarchy so we’ll get lesser black woman. Thank heaven for small favors?”

This ignited a storm at Georgetown. The author was libertarian legal scholar Ilya Shapiro, who was scheduled to join the faculty. Although he deleted the tweet before students were likely to see it, someone took a screen shot and disseminated it throughout the Georgetown “community.” Shapiro conceded that the tweet was “inartful,” but this concession wasn’t enough. He was subjected to hostile demonstrations and a months-long investigation that concluded with, essentially, a university reprimand.

The institution did not inflict further punishment only because Shapiro’s tweet was issued just before he became a member of the faculty. However, the institution implied that similar comments from Shapiro would lead to further persecution.

Realizing that his position had become untenable—and, perhaps, recognizing that he could do more good elsewhere—Shapiro resigned.

America is Nursing a Viper

Re-read again the comments of the leftist professors. Sense the hate.

The Shapiro episode became national news because Shapiro is well known within the D.C. Beltway and because Georgetown is a training ground for swamp critters. But it’s only one episode in a sorry national drama that has played over decades. This is the drama of pampered colleges and universities serving as centers of a toxic leftist ideology that fosters hate and intolerance. As a long-time professor I experienced it myself—until in 2010 I decided that enough was enough, and left academia.

Why should privileged professors say such hateful and unprofessional things? I think it’s because people tend to (1) resent those they’ve wronged and (2) resent those who have given them favors they can never repay.

Left-wing colleges and universities live off the sweat of Middle America. Directly or indirectly, most of their funds come from hardworking people—conservative, moderate, or non-political—who labor in the private-for-profit sector. Those people pay tuition and fund direct state and federal grants to colleges and universities. They also pay for indirect benefits, such as student scholarships and loans. Successful alumni, loyal to their almae matres and wishing to believe the best of them, add generous donations.

Middle Americans are the givers. The professors and bureaucrats, the overwhelming majority of whom have little or no private-for-profit background, are the takers. Gratitude is a rare commodity: It is human nature for the takers to resent the givers.

At one time, America could chuckle at “pointy-headed professors in their ivory towers.” That time has passed. What was once funny has become a viper.

Lesson #1: For our own self-protection, government subsidies for bloated universities must end. Abolishing the dysfunctional and expensive federal student loan program would be a good place to start.

A few naive conservatives and libertarians have tried to can get around university politics by devising and endowing special centers dedicated to freedom, conservative thought, or the Western tradition. But Shapiro was at such a center; it didn’t do him any good. John Eastman was a visiting professor at a similar center. That didn’t stop the university from retaliating when it learned that Eastman dared to give legal counsel to President Donald Trump.

Lesson #2: If you want to contribute to higher education, donate to one of the many responsible think tanks or to one of the few remaining conservative colleges.

I can’t depart without a final observation. Shapiro conceded that his tweet was “inartful.” I think he probably conceded too much. If he had written an article for a general circulation magazine, perhaps his language would have been “inartful.” But everyone understands that Twitter is designed for spontaneous comments, not for scrupulously composed essays.

Moreover—and this is important—law professors and law students especially should have found nothing objectionable in Shapiro’s tweet, even if they disagreed with it.

Argument, including edgy argument, is central to law schools. It’s a key tool for teaching both law and legal method. Professors and students are expected to roll with the punches, not take things personally, stay cool under pressure, analyze the opponent’s position, craft a response, and then punch back.

“Objectively best pick for Biden is Sri Srinivasan, who is solid prog[ressive] and v[ery] smart. Even has identity politics benefit of being first Asian (Indian) American. But alas doesn’t fit into latest intersectionality hierarchy so we’ll get lesser black woman. Thank heaven for small favors?”

Let’s analyze this as a good lawyer should:

The professional way to respond to Shapiro’s tweet would have been to dispute his facts or question his logic. These days, however, university professionalism is in very short supply.

In Not-So-Brilliant Move, San Francisco Spends Over $60,000 Per Homeless Tent 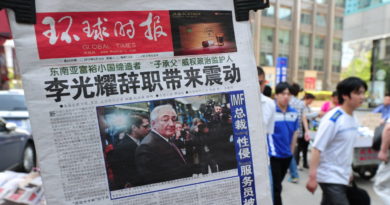 How Does China’s Regime Portray California?