Colleges were supposed to be bastions of free speech and diversity of thought; no more — witness the latest disgrace at the State University of New York at Buffalo.

The campus chapter of Young Americans for Freedom hosted ex-Rep. Allen West, a conservative black man, for a speech titled “America Is Not Racist — Why American Values Are Exceptional.” But a leftist mob disrupted the event, screaming “no peace,” chasing the YAF head into hiding and forcing the guest to exit with a police escort.

YAF chapter prez Therese Purcell said she feared for her life, as members of the “very angry mob . . . were clearly saying that they were trying to chase me, that they wanted to capture me,” she told “Fox & Friends.”

This, for simply presenting the idea that American values are the answer to racism — a bane West himself overcame on his way to the rank of lieutenant colonel in the US Army.

Worse, these woke campus goons are the product of the modern American university system, which all too often teaches kids that it’s moral to use violence in pursuit of radical intolerance.

This is how so much of the nation’s elite became so devoted to silencing disagreement: It’s what our colleges now teach. 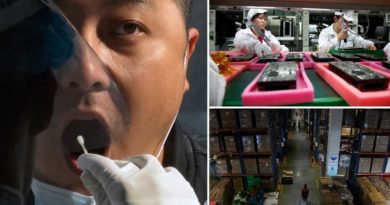