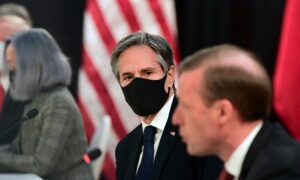 “Wokewashing” is a term used by our progressive friends to describe the way in which corporations engage in public relations efforts on behalf of various “woke” environmental or racial causes as a way to increase their profits or else to disguise or compensate for less savory aspects of their own operations.

Nike’s hiring of Colin Kaepernick, an unemployed football quarterback famous for his disrespect for the American flag, while exploiting Chinese slave labor in the manufacture of its athletic shoes, is a good example.

Criticizing your own country serves the woke revolution; criticizing its adversaries does not.

Politicians and diplomats are ostensibly in the business of defending their country against the criticisms of foreign adversaries. At least they used to be. President Biden, however, has given so many hostages to the woke brigade on his way to the Oval Office that it now appears he has cut the ground from under his own diplomatic feet.

Having agreed with so much of the anti-American revolutionists’ agenda, Mr. Biden had left them with no comeback to the anti-American harangue of their Chinese counterpart, Yang Jiechi—a harangue which echoed that agenda and left the summit in disarray.

Fortunately, the sycophantic American media had no wish to publicize what, under any other circumstances, would have been seen as a diplomatic disaster. In fact, they barely noticed it.

President Biden himself said that he was “proud” of his team—perhaps for Secretary Blinken’s feebly defensive reply to Mr. Yang that cited what he called a “hallmark of our leadership here at home, and that’s a constant quest to, as we say, form a more perfect union. And that quest, by definition, acknowledges our imperfections, acknowledges that we’re not perfect, we make mistakes, we have reversals, we take steps back.”

Yeah, that will show them.

If the roles had been reversed and the Chinese had been on the receiving end of such a tongue-lashing as they administered to the Americans, they would have walked out. The merely perfunctory criticism of the Chinese by Mr. Blinken that sparked Mr. Yang’s fury shows that the American must have been aware of this himself.

He should have walked out too, but by sitting through the string of insults to his country and then bragging about his own virtue because “we take steps back,” he lost face in Chinese eyes.

You can tell because, back in China, they celebrated what looked to them like a diplomatic triumph over the hapless Americans by selling “T-shirts, umbrellas, handbags, lighters, and mobile phone cases,” with quotations from Mr. Yang’s rant printed on them.

Meanwhile, the clueless American media chose not to notice that they and their favorite president had been made fools of.

Instead, readers of The New York Times were treated to a renewal of criticism of our own country from veteran columnist Thomas L. Friedman in an article headed: “China Doesn’t Respect Us Anymore — for Good Reason.”

Oddly, though it was published less than a week after the diplomatic debacle in Alaska, Mr Friedman’s piece makes no mention of this as a reason for China’s lack of respect for us. Instead, he looks back a week earlier to quote extensively from what he describes as an “epic rant” by comedian Bill Maher on HBO, the burden of which is that China, for all its faults, is at least a dynamic society that gets things done while we are “a silly people” quarreling among ourselves about silly things and “can’t do anything at all.”

Can’t do anything at all? Has he ever heard of Operation Warp Speed?

But that was done under the hated Trump administration, so it presumably doesn’t count.

In addition to the wisdom of Bill Maher, Mr. Friedman quotes James McGregor, the chairman of the consultancy APCO Worldwide, Greater China, whose opinion it is that “China’s leaders are fierce but fragile. . .Precisely because they were not elected, they wake up every day scared of their own people, and that makes them very focused on performance.

But Mr. Friedman goes on in his own voice: “Whenever I point this out, critics on the far right or far left ridiculously respond, ‘Oh, so you love China.’ Actually, I am not interested in China. I care about America. My goal is to frighten us out of our complacency by getting more Americans to understand that China can be really evil AND really focused on educating its people and building its infrastructure and adopting best practices in business and science and promoting government bureaucrats on merit — all at the same time. Condemning China for the former will have zero impact if we’re not its equal in all of the latter.”

Actually, it will have zero impact whether we are equal in efficiency and the rest of it or not — which is precisely the problem with Carterism, as I call the style of diplomacy, pioneered by our 39th president, which sees international relations as a competition to decide which nation gets to call itself the most virtuous.

As I wrote back in the Carter era, if you go around telling other nations what they should do if they want to be as rich as you are, they will listen with interest—as, subsequently, China did listen. And take note.

But if you go around telling them what they must do if they want to be as good as you are, they will turn away in disgust. Or, I might have added, with the kind of angry tirade that greeted poor Mr. Blinken in Alaska.

If the Chinese have contempt for us it is not because we are “a silly people” (though lately we seem to be doing all we can to show that we are) but because, schooled by the media in self-righteousness, we so often ignore the real business of diplomacy for the sake of feckless moral posturing that can never accomplish either its ostensible purpose of changing other nations’ behavior or any other purpose, apart from the creation of antagonisms which it may be difficult to diminish by real diplomacy.

Also, I think a little contempt might be due to Mr. Blinken personally for apparently not knowing that, as so many other Democrats do, he gave his little performance for the benefit of the media back home rather than the Chinese—who he should have known would react to it as they did.

James Bowman is a resident scholar at the Ethics and Public Policy Center. The author of “Honor: A History,” he is a movie critic for The American Spectator and the media critic for the New Criterion.

How colleges use SAT-optional applications to covertly impose affirmative action

COVID Panic Will Only End Through Civil Disobedience and Mockery