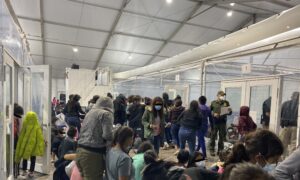 Joe Biden and whoever is advising him or telling him what to do—I’ll let others surmise—absolutely knew that if Donald Trump was doing it, it had to be wrong.

The Democrats will save the children, the tired and poor of Central America, the “huddled masses yearning to breathe free.”

Only the opposite is and was true.

That policy—if you could even begin to call it that— is and was “virtue signaling” almost at its purest.

The reality is despicable.

What really happens from the Democrats’ quasi open-borders policy is a disaster both for the United States and the benighted Central American countries these illegals are fleeing.

TIME OUT: Let’s be real and put that euphemistic desecration of the English language “undocumented workers” to rest. The people crossing the border are illegal aliens, no quotes.

Any country that allows both legal and illegal immigration is creating chaos, authorizing and encouraging crime, and really major crime at that.

We have just learned from Tucson Border Patrol Chief Roy Villareal, retired this December after thirty years on the force, that “criminal organizations trafficking women, children, families and single adults over the U.S.-Mexico border earned as much as $14 million a day.” [bold mine]

Think about the people involved with that, the human suffering it entails, not to mention the 15,000 children, if that’s even the correct number, evidently enticed by the administration and wearing Biden t-shirts, being housed in cages until they can find a Motel 6 or similar to put them in. Besides the massive disorganization this indicates on the part of the administration, imagine the futures these kids will have. Dickens already wrote it.

So what is the administration doing about all this? We don’t know because they won’t allow the media to see, not even their complaisant mainstream pals. (I thought Biden promised the most transparent administration ever. Oh well…)

Instead, in the grand tradition of Susan “Benghazi” Rice, they sent out Department of Homeland Security Chief Alejandro Mayorkas to lie about the situation on the Sunday shows, reassuring us the border is “closed” and whatever problems exist are, needless to say, Trump’s fault.

But it’s not just the border. All Biden policies can be reduced to a form of virtue signaling. Part of this stems from looking over his shoulder at AOC and Company, but a larger part may be that he has nothing better, no ideas of his own other than the most tired conventional wisdom, which is often about no more than “looking good.”

Going back willy-nilly into the climate accords without examining the facts on the ground—for example that the United States had the most carbon emissions improvement in the world during the Trump administration and that China remains the world’s number one polluter—is certainly virtue signaling.

So was the snap decision to eliminate the Keystone pipeline without evaluating the environmental implications. As many have noted, this would only force oil to be transported via environmentally more precarious rail.

As for energy independence, forget about it. Oil bad. Nuclear bad. Wind and solar good, even if they fail every other week and twice on Sunday.

Foreign policy, particularly vis-a-vis Iran, is pure, refined virtue signaling. We must go back into the JPCOA (Iran deal) because, well, it’s good. We are good guys. That Trump’s sanctions were actually getting results is irrelevant. That we might be destroying the Abraham Accords in the process is, well, que sera sera.

Didn’t these people ever learn that by being the good guy you are often the bad guy? Weren’t they ever parents? (Well, in Biden’s case, it’s pretty clear he has some problems in that area.)

Virtue signaling is a habit for them.

But the problem with virtue singling, as with all manifestations of moral narcissism, is the disconnect between what you say you believe and the results of those beliefs.

And very often those results can be catastrophic.

Roger L. Simon is an award-winning novelist, Oscar-nominated screenwriter, co-founder of PJMedia, and now, editor-at-large for The Epoch Times. His most recent books are “The GOAT” (fiction) and “I Know Best: How Moral Narcissism Is Destroying Our Republic, If It Hasn’t Already” (nonfiction). He can be found on Parler as @rogerlsimon.