President Joe Biden is heading to Gotham Thursday to meet with Mayor Eric Adams. The topic is crime. New Yorkers will not be fooled when the president pays lip service to public safety and support for police.

Biden frames New York’s tragedies as a gun problem. On Monday, he talked about “the surge of gun violence since the start of this pandemic.” The coronavirus caused illness, not crime.

Forget political correctness: Criminals cause crime, and criminals cause gun violence. And now that Democrats have defunded police, no one is left to stop the criminals. Progressive prosecutors won’t pursue them either.

We should crack down on gang members wielding illegal firearms. Yet the root cause of today’s national crime wave is defunded police forces sidelined by Democrats.

We turn to police to deal with criminals. If they can’t do their job, our streets aren’t safe. Now radical district attorneys like Manhattan’s Alvin Bragg are refusing even to prosecute the crooks that our cops do catch.

The problem starts at the top. For 20 months, Joe Biden has aided and abetted the most dramatic increase in violent crime in American history. As New Yorkers continue to mourn the tragic loss of Officers Wilbert Mora and Jason Rivera, it’s past time elected leaders stood with our police.

In 2020, the Democrats made their rallying cry “Defund the police.” Kamala Harris said America should “reimagine public safety.” Biden said America was “systemically racist” and police funding should be “redirected.” Democrats were silent as Antifa and other leftists burned cities from Portland to New York.

Police officers across America knew they were under attack. Retirements went up by half, and resignations increased by nearly one-fifth in just one year. NYPD retirements nearly doubled.

The results were predictable and catastrophic. Violent crime and drug crime surged at a record pace. America experienced the fastest increase in the murder rate ever recorded, with nearly 5,000 more Americans killed in 2020 than the year before.

The Major City Police Chiefs Association reports 63 of America’s 66 biggest cities saw at least one category of violent crime go up in 2020. Democrats run almost all of them.

Cities that cut police funding and otherwise hamstrung cops descended into chaos. Homicides nearly doubled in Minneapolis. They went up by nearly half in New York City in 2020. Last year, 16 cities broke their own records for murder, including Philadelphia, Atlanta and Rochester. Carjackings in New York City increased by more than half.

Attacks on officers like the fallen heroes Rivera and Mora have spiked. In 2021, officer deaths hit their highest levels since the 9/11 attacks. Ambush attacks on police doubled. In January, 24 officers were shot, a 40% increase over January 2021.

Biden has stacked his administration with anti-police radicals. His labor secretary cut funding for police as Boston’s mayor. Two of his top Justice Department officials are on record supporting cuts to police.

Just this past Sunday the president’s press secretary, Jen Psaki, mocked those who think he is soft on crime. “What does that even mean?” she asked with a laugh. She said it was something from “an alternate universe.”

Democratic politicians are the ones living in an alternate universe. In the real world, cities like New York and San Francisco have been turned into war zones. Citizens see police in their communities resigning, retiring and getting fired. They know criminals no longer face consequences for their actions.

No matter what Joe Biden says Thursday, the American people know the truth. They utterly reject his reckless anti-police agenda. In November, voters rebuffed politicians advocating police defunding in cities like Buffalo and Minneapolis. In the latter, voters overwhelmingly spurned a proposal to replace the police department with a “public-health oriented” Department of Public Safety.

New York’s new mayor is himself a former police officer and one of the only Democratic candidates who opposed defunding police.

The American people want safe communities, and they look up to police officers as some of the finest people in the country. Senate Republicans stand with law enforcement. We’ll promote an agenda that defends our communities and increases the number of police on our streets. Americans deserve nothing less.

John Barrasso of Wyoming chairs the Republican Conference in the US Senate. 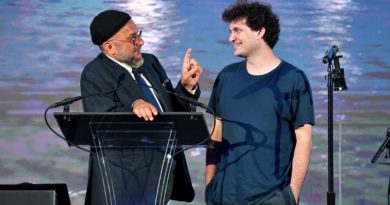 Resistance is rising to woke colleges’ race and sex discrimination

How China’s BGI Is Taking Over the Human Genome