A businessman once asked a famous labor leader what he wanted for his workers. The leader replied, “More.” Those favoring policies to increase government spending and control over the economy have the same answer, but add the word power.

A problem occurs when a company can’t afford more and the demand leads to bankruptcy. The classic example was the 1966 demise of the New York Herald Tribune. The union leaders said they wanted more. The paper’s management responded with, “Any more and the paper will be forced to close and everyone will lose their jobs.” The union leaders did not listen and the paper immediately closed forever.

Similarly, when politicians vote to shift more resources from the private sector to government, almost everyone suffers.

My book Rich Nation, Poor Nation (2017) details the sad past effects of such policies. During the years from 1900 to 2015, for example, there were five cycles, totaling 52 years, when U.S. policies increased federal spending, regulations, and control over the economy and markets. The end result was economic stagnation or worse. The mighty U.S. economy behaved as an underdeveloped nation, with workers’ living standards failing to improve for the entire 52 years.

In contrast, almost all (87 percent) of the increase in living standards between 1900 and 2015 came during only 50 years. These were the years when tax rates were cut and resources were shifted from government back to the private sector.

Beginning with the lockdown in 2020, there has been an ongoing shift in control of the economy, away from the private productive sector toward the nonproductive government. Federal lockdown spending increased by $2.1 trillion in 2020. Despite of the recovery in 2021, President Biden’s Build Back Better Act allocates another $200–400 billion a year, for the next 10 years, to the federal government.

What did Build Back Better do for the economy? It lowered living standards.

This is why living standards once again are declining.

No wonder there is a shortage of workers. 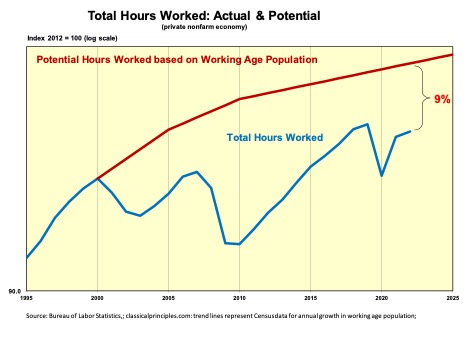 Despite the negative impact of Build Back Better, the Biden administration is doubling down with more destructive policies.

Last month, for example, 24 Republicans in the House and 14 in the Senate helped Congress pass the Chips for America Act. It includes $280 billion over the next 10 years to reallocate resources from the private sector into areas favored by politicians. The act also includes a significant $328 billion in tax increases over 10 years and shifts yet more power to government to control the prices of prescription drugs and countless other items.

This ongoing shift in control of the economy—from allocation of resources by markets to allocation by political edicts—will continue to erode living standards. The U.S. economy is moving rapidly in the direction of one controlled by the political elite instead of by market forces.

A logical person might ask, “Are these politicians stupid?”

The answer is, no, they are very smart. But they also are compromised.

Politicians continue to vote for measures that allow their friends, families, and fellow bureaucrats to reallocate trillions of taxpayer dollars. The selected recipients of the favored government spending are all too willing to show their appreciation with generous campaign contributions. It is blatant self-interest. As long as it continues, the main effect is to undermine living standards for most workers, and, in the process, undermine democracy.

Robert Genetski is a public speaker, author, columnist, and one the nation’s leading economists. He has taught economics at the University of Chicago’s Graduate School of Business and NYU. His latest book is “Rich Nation, Poor Nation: Why Some Nations Prosper While Others Fail.” Genetski’s website is ClassicalPrinciples.com.

The CCP’s 100 Years of Misery: Famine, War, and Repression

Clarity on Russia, Ukraine, and the American National Interest