California’s moratorium against evicting renters claiming a hardship caused by COVID-19—was extended to Sept. 30, despite the state covering the rent tab for those behind on payments.

The moratorium was previously set to expire June 30.

State legislative leaders and Gov. Gavin Newsom, all members of the Democratic Party, on June 25 announced they had reached agreement in their three-way negotiations (among the governor, state senate and state assembly) regarding the moratorium.

Legislators on June 28 published the revisions, which presumably incorporate the changes agreed to with the governor.

If passed by both chambers of the California legislature and signed into law by Gov. Gavin Newsom, Assembly Bill 832 would “enact the COVID-19 Rental Housing Recovery Act.”

The legislation protects tenants claiming to be under pandemic-related financial distress from eviction until Sept. 30. Landlords are prohibited from seeking evictions for any reason, and cannot turn off utilities or report tenants to immigration authorities in retaliation for tenants claiming to suffer COVID-19 related hardship.

When announcing the results of the negotiations, Newsom’s office said “The three-party agreement on AB 832—which extends the current eviction moratorium through September 30, 2021—will ensure that California quickly uses the more than $5 billion in federal rental assistance.”

Said Senate President pro Tempore Toni G. Atkins (D-San Diego): “Our housing situation in California was a crisis before COVID, and the pandemic has only made it worse.”

According to current U.S. Census data, a higher percentage of women renters or homeowners are faring worse than they were a year ago. The most recent U.S. Census data shows that 6.3 percent of renters in California are women who are behind on housing payments—up from six percent a year ago. 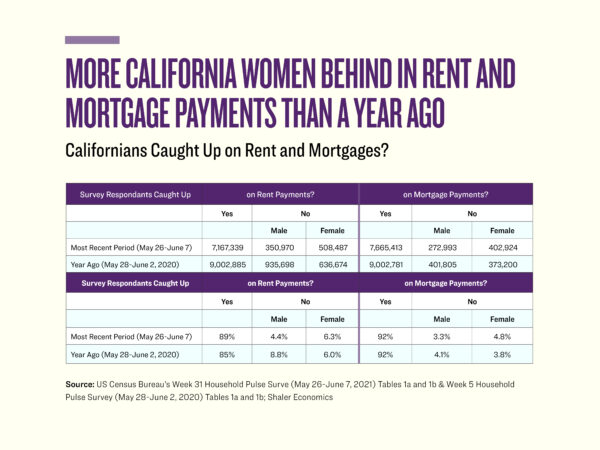 The experience of women renters is dramatically different from their male counterparts; a year ago, 8.8 percent of all California renters were men who were behind on their rent payments. Today, just 4.4 percent of renters are men who are late on rent.

The legislation proposed by Assembly Bill 832 does have a provision which might be helpful for mortgage borrowers: if a mortgage lender does not grant a forbearance to a California borrower, it must declare in writing why the request was denied.

The most recent U.S, Census data shows that 4.8 percent of California mortgage borrowers are women behind on mortgage payments—up from 3.8 percent a year ago.

Tying together many of the disparate issues at hand, Assemblymember David Chiu (D-San Francisco), chair of the Assembly Housing and Community Development Committee, said: “Even though our state has reopened, hundreds of thousands of Californians are grappling with rental debt and the threat of eviction.

“Removing eviction protections now, while billions of rent relief dollars are still available, would be a disaster and exacerbate our homelessness crisis. This proposal avoids a massive eviction cliff, allowing us to keep tenants in their homes and get landlords the financial support they need.”

Tim Shaler is a professional investor and economist based in Southern California. He is a regular columnist for The Epoch Times, where he exclusively provides some of his original economic analysis.

Smaller Increases but Not Smaller Ambitions

The CDC finally recognizes the costs of its top-down dictates

Three years after COVID hit, we can see which pols got it wrong