China’s fixed asset investment from January to October totaled 47.15 trillion yuan (about $6.78 trillion), a 5.8 percent year-on-year increase in the first 10 months of this year, according to a statement by the National Bureau of Statistics (NBS) on Nov. 15.

Furthermore, fixed asset investment from the private sector increased 1.6 percent from a year earlier to 25.84 trillion yuan (about $3.71 trillion).

At first glance, a growth rate of 5.8 percent for fixed asset investment is not alarming.

According to official data, the growth rates from 2018 to 2021 are 5.9 percent, 5.4 percent, 2.9 percent, and 4.9 percent, respectively, declining yearly. Compared with the double-digit annual growth rates that have lasted for many years, the last few years paint a different picture.

Between January and November, China issued more than 4 trillion yuan (about $567 billion)—topping the 4 trillion mark for the first time—of new special bonds to promote infrastructure construction. This investment from local governments contributed to a major growth of fixed asset investment this year.

In fact, the growth of private fixed assets investment has been weak in recent years. According to official data, the growth rates from 2018 to 2021 are 8.7 percent, 4.7 percent, 1.0 percent, and 7.0 percent, respectively.

However, after a close look at the data released by the NBS, the growth rates seem to be largely misrepresented.

Fixed asset investment went down to 51,890.7 billion yuan in 2020, and the growth rate for that year should also be negative. How could it be 2.9 percent?

However, the investment in 2021 is still lower than that in 2019. But the NBS claimed that national fixed asset investment saw an increase of 8.0 percent in 2019, “with an average increase of 3.9 percent in two years.”

It’s hard to imagine a state statistics bureau would make such mistakes, even though it’s been known for some time that Beijing’s data was never real.

Could it mean the Chinese economy has been hopelessly ill?

Wang He has master’s degrees in law and history, and has studied the international communist movement. He was a university lecturer and an executive of a large private firm in China. Wang now lives in North America and has published commentaries on China’s current affairs and politics since 2017.

Even More Than the Economy, 2022 Is the Fentanyl Election 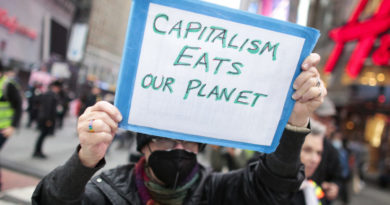