The disappearance of tennis star Peng Shuai this month has led many around the world to question the holding of the 2022 Winter Olympics in Beijing. The Games are scheduled to begin February 4.

Now, only the morally bankrupt could think it is a good idea to allow the hostage-taking, rapist-protecting, genocide-committing Chinese regime to host this competition.

It is now time for the world to face the reality of the Communist Party of China and the horrific system it has constructed. There is only one correct choice: Move the Games.

For decades, people overlooked the great crimes of Chinese communism because they had hope that it would, over time, evolve and become benign. When “reformer” Deng Xiaoping shoved aside Hua Guofeng, Mao Zedong’s chosen successor, and engineered at the end of 1978 the historic Third Plenum, outsiders thought they were seeing a new—and far superior—“New China.”

In fact, as the Communist Party embarked on gaige kaifang—the policy of “reform and opening up”—the regime both moderated its foreign policy and relaxed or eliminated totalitarian social controls. Then, optimism ruled.

But not now. The current ruler has reversed trends that many outsiders—as well as the Chinese people themselves—welcomed. The ruling group, never benevolent, has become even more monstrous under Xi Jinping.

Enter Ms. Peng, sporting hero and darling of the Chinese public. On Nov. 2, she posted on Weibo, often called China’s Twitter, an accusation that Zhang Gaoli, aided by his wife, pressured her into providing sex.

The charge was unprecedented in the history of the People’s Republic of China. Zhang was once a senior leader, a vice premier who also served from 2012 to 2017 on the Communist Party’s Politburo Standing Committee, the highest ruling body in the country.

Peng’s posting was removed within a half hour, and the two-time Grand Slam doubles champion—Wimbledon in 2013 and the French Open in 2014—herself disappeared.

On Nov. 17, China Global Television Network (CGTN), the international arm of the Chinese state broadcaster China Central Television, released the text of an e-mail, in English, purportedly written by Peng. In that message—correctly described by many as “creepy”—she said she was “fine.” Peng also said the “news” released by the Women’s Tennis Association “including the allegation of sexual assault, is not true.” Almost nobody believes that the message is both authentic and not the result of coercion.

Next, on Nov. 19 a CGTN commentator posted on Twitter three photos of Peng, purportedly first released by the tennis star’s friend on the popular Chinese app WeChat. Peng in the pictures looks happy playing with a cat and stuffed animals, including a panda.

Then Hu Xijin, editor-in-chief of the Communist Party’s Global Times tabloid, on Nov. 19 said on Twitter that Peng “will show up in public and participate in some activities soon.”

Hu was prescient. On the following day, he posted two videos purporting to show Peng in a restaurant this month. The conversation at the table indicates that the videos were shot on Nov. 20. The conversation, however, is stilted, obviously scripted to highlight the date it supposedly took place.

Finally, Hu posted a video of a smiling Peng at a tennis event in Beijing, supposedly taken on the morning of Nov. 21.

Peng is not the only high-profile figure detained in recent months. Businessman Jack Ma, citizen journalists Zhang Zhan and Chen Qiushi, and celebrity Zhao Wei were all disappeared. Consider it a pattern.

Xi Jinping’s China is far more coercive and secretive than the China of the preceding three decades, suggesting the regime is returning to its old ways. Mao and Mao-admirer Xi reflect the true nature of Chinese communism.

That regime, now dominated by Xi Jinping, is a threat to athletes coming to China to compete, as the Peng incident demonstrates. “Athletes are useful to the Communist Party as long as they are tools of the state,” Cleo Paskal of the Foundation for Defense of Democracies told Gatestone. “If they try to be individuals, they become a liability. The state will destroy the individual if that person is any risk to the Party.” As Paskal, also associated with Chatham House, notes, Peng now poses a risk to the regime.

That is why the regime will make Peng publicly retract the accusations or destroy her. The individual means nothing in China’s current system. Too many times, state television has aired ghastly confessions of obviously worn-down individuals.

President Joe Biden on Nov. 18, in response to a reporter’s question in the Oval Office, said he is considering a diplomatic boycott of the Beijing Games. Senator Tom Cotton, the Arkansas Republican, has just called for “a complete and total boycott.”

There are many reasons to boycott or move the Olympics from Beijing. So far advocates of such actions have focused on the Communist Party’s genocidal policies against Uyghurs and other Turkic minorities and its other crimes against humanity. Of course, no ruling group that organizes rape, slavery, mass detention, torture, killings, and organ harvesting should be permitted, among other things, to host international sporting events.

The International Olympic Committee maintains that these atrocities are none of its business. Yet the protection of athletes is. Peng’s detention tells us athletes will not be safe in China. The Games, after all, are first and foremost about the competitors, and their personal safety must be the primary concern.

Paskal points out that holding the Games in China goes against the whole concept of Olympic competition. “The Olympics are about individuals striving to be their best,” she says. “That is antithetical to the Communist Party, which is about subservience of the individual to the goals of the state.”

Even at this late date, it is time to boycott or move the Games from China.

From the Gatestone Institute

Gordon G. Chang is a distinguished senior fellow at the Gatestone Institute, a member of its Advisory Board, and the author of “The Coming Collapse of China.” Follow Gordon at GordonChang.com and on Twitter @GordonGChang

Whatever Happened to Empathy? 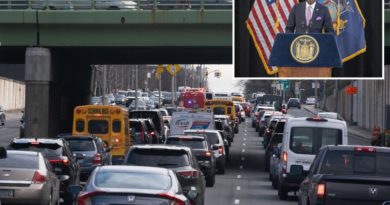 Hochul stands up against crime for average New Yorkers