Stephanie Seneff, a senior research scientist at the Massachusetts Institute of Technology (MIT), is speaking out about the risks of COVID-19 shots, including their link to neurodegenerative diseases and vaccine acquired immunodeficiency syndrome (VAIDS).

Seneff is perhaps most well known for her studies on the chemical glyphosate. She determined that the increase in glyphosate usage in the U.S., as well as in Canada, is extremely well-correlated with the concurrent increase in the incidence of multiple diseases, including breast cancer, pancreatic cancer, kidney cancer, thyroid cancer, liver cancer, bladder cancer and myeloid leukemia.

She also believes that glyphosate exposure may have worsened COVID-19 outcomes for many people, and could also lead to more severe reactions following COVID-19 shots, but as the pandemic progressed, she got involved in researching messenger RNA (mRNA) shots.

“It’s a technology that was extremely novel, that had never been used before, and I felt really worried about that,” Seneff told Zeee Media. “That degree of sophistication in the technology would normally take 12 years to get to market, and normally only 2% of products that were tried would actually make it to the market.”

mRNA COVID-19 shots teach your cells to produce a protein, or piece of protein, that triggers an immune response, including the production of antibodies. However, because natural mRNA is easily broken down, this means the experimental gene therapy needs a special delivery system to make it to the body’s cells.

The shots use lipid nanoparticles that contain polyethylene glycol (PEG) for this purpose. The mRNA is wrapped in lipid nanoparticles (LNPs) that carry it to your cells, and the LNPs are “PEGylated” — that is, chemically attached to PEG molecules to increase stability.

Usually, if you were to inject RNA into your body, enzymes would immediately break it apart, but the COVID-19 shots are specifically designed so that doesn’t happen. Instead, the RNA doesn’t break down and quickly and efficiently begins producing protein. Seneff says:

“They also basically redesigned the RNA itself, first of all to make it look like a human RNA rather than a viral one, so the cell does not realize it’s been invaded, because it looks like a human molecule … So they’ve done all of these things — everything they can think of — to make sure that it’s sturdy, that it sticks around, that it doesn’t degrade, and it keeps on making protein.”

In fact, Seneff states that recent studies show mRNA and the spike protein persists in the lymph nodes of people who’ve received COVID-19 shots at least 60 days later — something Seneff says is not only really shocking but also completely abnormal.

Another important point is that, by injecting the mRNA, it bypasses barriers that a virus would face after natural exposure. The virus would be inhaled and pass through your nose into your lungs.

“If you have a strong immune system,” Seneff says, “it will stay in your lungs, it won’t go beyond that.” However, once it enters your tissues and bloodstream, it can cause systemic problems, which can occur in serious cases of natural infection as well as after receiving a COVID-19 injection.

Spike Protein Is Neurotoxic, Even Without the Virus

It’s also been revealed that the spike protein on its own is enough to cause inflammation and damage to the vascular system, even independent of a virus. It’s also neurotoxic, according to Seneff, and spike proteins can circulate in your body after infection or injection, causing damage to cells, tissues and organs.

For instance, Pfizer’s biodistribution study, which was used to determine where the injected substances end up in the body, showed the COVID spike protein from the shots accumulated in “quite high concentrations” in the ovaries.

Further, a Japanese biodistribution study for Pfizer’s jab found that vaccine particles move from the injection site to the blood, after which circulating spike proteins are free to travel throughout the body, including to the ovaries, liver, neurological tissues and other organs.

Evidence the Shots May Affect the Brain

Writing in the International Journal of Vaccine Theory, Practice and Research, Seneff and Greg Nigh, who is involved in naturopathic oncology at Immersion Health in Oregon, explained the relevance of prion-protein-related amino acid sequences within the spike protein:

“There are many parallels between α-synuclein and the spike protein, suggesting the possibility of prion-like disease following vaccination. We have already shown that the mRNA in the vaccine ends up in high concentrations in the liver and spleen, two organs that are well connected to the vagus nerve.

The cationic lipids in the vaccine create an acidic pH conducive to misfolding, and they also induce a strong inflammatory response, another predisposing condition. Germinal centers are structures within the spleen and other secondary lymphoid organs where follicular dendritic cells present antigens to B cells, which in turn perfect their antibody response.

Researchers have shown that mRNA vaccines, in contrast with recombinant protein vaccines, elicit a robust development of neutralizing antibodies at these germinal centers in the spleen. However, this also means that mRNA vaccines induce an ideal situation for prion formation from the spike protein, and its transport via exosomes along the vagus nerve to the brain.”

Genetic modifications introduced by COVID-19 shots may induce immune cells to release large quantities of exosomes into circulation. Exosomes are extracellular vesicles that contain protein, DNA, RNA and other constituents, and may contain mRNA along with spike protein. According to Seneff and colleagues:

“[W]e present the evidence that vaccination, unlike natural infection, induces a profound impairment in type I interferon signaling, which has diverse adverse consequences to human health.

We explain the mechanism by which immune cells release into the circulation large quantities of exosomes containing spike protein along with critical microRNAs that induce a signaling response in recipient cells at distant sites.

Shedding May Also Occur Via Exosomes

Seneff also discusses the possibility that people who have received COVID-19 shots could shed vaccine particles to those around them, potentially leading to shot-induced disease or symptoms.

Studies by Pfizer suggested, in fact, that secondary exposure to the vaccine could occur, using the examples of exposure by inhalation or skin contact, as well as “environmental exposure during pregnancy.”

One example given included: “A male family member or health care provider who has been exposed to the study intervention by inhalation or skin contact then exposes his female partner prior to or around the time of conception.” While this may seem hard to believe, Seneff said there is a plausible explanation of how COVID-19 shots could lead to shedding:

“[T]here is a plausible process by which it could occur through the release of exosomes from dendritic cells in the spleen containing misfolded spike proteins, in complex with other prion reconformed proteins.

These exosomes can travel to distant places. It is not impossible to imagine that they are being released from the lungs and inhaled by a nearby person. Extracellular vesicles, including exosomes, have been detected in sputum, mucus, epithelial lining fluid, and bronchoalveolar lavage fluid in association with respiratory diseases.”

Further, experimental and observational evidence show that the human immune response to COVID-19 shots is very different from the response induced by exposure to SARS-CoV-2, and people who’ve received COVID-19 shots may have damage to their innate immune system that’s leading to a form of VAIDS, due to the impairment in interferon signaling.

Simple Methods to Detox From the Shots

Seneff and colleagues are calling for comprehensive research and surveillance practices to monitor adverse events associated with mRNA shots as well as track biological effects via tests such as D-dimer, fibrinogen and C-reactive protein.

“Studies comparing populations who were vaccinated with the mRNA vaccines and those who were not to confirm the expected decreased infection rate and milder symptoms of the vaccinated group, while at the same time comparing the rates of various autoimmune diseases and prison diseases in the same two populations,” are also needed, she wrote, along with, “Studies to assess whether it is possible for an unvaccinated person to acquire vaccine-specific forms of the spike proteins from a vaccinated person in close proximity.”

Fortunately, there are ways to help detoxify your body from COVID-19 shots. Most importantly, Seneff recommends eating a certified organic whole foods diet, to avoid glyphosate and other chemicals in food. In addition, focus on eating a nutrient-dense diet that concentrates on sulfur-rich foods like onions, garlic and cruciferous vegetables, as well as organic eggs, grass fed beef and seafood, with plenty of colorful fruits and vegetables.

In addition, Seneff recommends regular sunlight exposure to your skin and eyes, which helps you produce vitamin D as well as sulfate. A group of international doctors and holistic practitioners who have experience helping people recover from COVID-19 and post-injection illness compiled natural options for helping to reduce your body’s spike protein load. The following are spike protein inhibitors, which means they inhibit the binding of the spike protein to human cells:

They also compiled a list of spike protein neutralizers, which render it unable to cause further damage to cells. This includes: 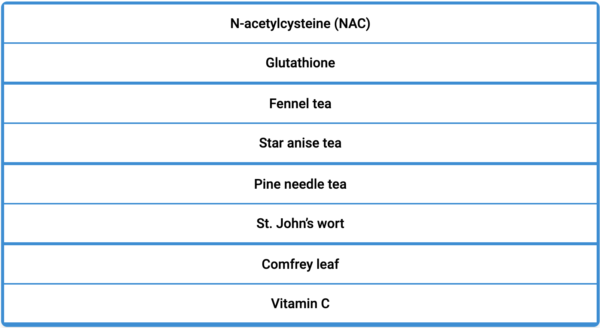 Many natural IL-6 inhibitors, or anti-inflammatories, exist and may also be useful for those seeking to detox from COVID-19 or COVID-19 injections: They also compiled a list of spike protein neutralizers, which render it unable to cause further damage to cells. This includes:

The original article was published March 17, 2022 on Mercola.com

‘Spend Now, Deal With the Consequences Later’ Is the Worst Policy