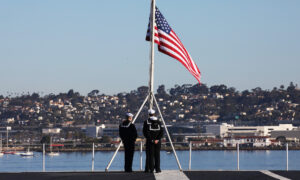 “Sometimes I think we care more about whether we have enough diversity officers than if we’ll survive a fight with the Chinese navy.”

“It’s criminal. They think my only value is as a black woman. But you cut our ship open with a missile and we’ll all bleed the same color.”

These are the words of an active duty lieutenant in the U.S. Navy. They were recorded in a disturbing new report conducted by retired officers Lieutenant General Robert E. Schmidle of the U.S. Marine Corps, and Rear Admiral Mark Montgomery of the U.S. Navy, at the direction of Republican Senator Tom Cotton and Representatives Jim Banks, Dan Crenshaw, and Mike Gallagher on the apparently flagging fighting culture of the Navy’s surface fleet.

The lieutenant’s words capture the looming disaster to American life and limb posed by the cult of Diversity, Equity, and Inclusion conquering every aspect of society—including our national security and intelligence apparatus—as the Woke anti-cultural revolution rages on.

They are particularly poignant because they come at a time when America faces its most formidable foreign adversary since the Soviet Union—a Communist China aggressively pursuing global dominance, armed with a military that increasingly rivals and in some areas eclipses our own, led by a navy boasting a fleet larger than ours that is central to its regional imperial ambitions.

“China’s navy is viewed as posing a major challenge to the U.S. Navy’s ability to achieve and maintain wartime control of blue-water ocean areas in the Western Pacific—the first such challenge the U.S. Navy has faced since the end of the Cold War—and forms a key element of a Chinese challenge to the long-standing status of the United States as the leading military power in the Western Pacific. Some U.S. observers are expressing concern or alarm regarding the pace of China’s naval shipbuilding effort, particularly for building larger surface ships, and resulting trend lines regarding the relative sizes China’s navy and the U.S. Navy.”

While the U.S. fleet dwarfs that of China’s in terms of tonnage, as a former senior national security official recently counseled in a conversation about this issue, we must be cognizant of the old Stalinism that “quantity is a quality all of its own.”

Setting aside the U.S.-China contest, the strength of America’s military broadly, and its navy in particular, is ultimately a function of capability and will. Manifestly, as in any field, success will be determined by devotion and adherence to a mission.

In the Navy’s case, as the report notes, the mission must be “Finding and sinking enemy fleets.” To successfully pursue a mission, any organization must be dedicated to cultivating excellence in part through rewarding on the basis of merit, fostering dynamism through encouraging innovation and experimentation, and of course deploying resources accordingly.

That interviewees across ranks questioned the commitment of the Navy to its central cause, with one noting, “I didn’t really feel that fighting spirit in the surface Community”; and another that “we’ve got so many messages about X, Y, Z appreciation month, or sexual assault prevention, or you name it. We don’t even have close to that same level of emphasis on actual warfighting”; and still another that “The Navy treats warfighting readiness as a compliance issue,” adding “You might even use the term compliance-centered warfare as opposed to adversary-centered warfare or warfighter-centered warfare.” This portends failure.

On top of this reported “insufficient focus on warfighting skills,” the authors conclude that there is a “perception of a zerodefect mentality accompanied by a culture of micromanagement,” as well as “over-sensitivity and responsiveness to modern media culture,” accompanied by more material issues such as a “lack of resources and consistency in surface warfare training programs, and the Navy’s underwhelming commitment to surface ship maintenance.”

This is to say nothing of other issues raised, like sailors being buried under an avalanche of administrative tasks.

Collectively, as the report notes, these cultural defects threaten both the morale of the Navy and its readiness. The Navy, in short, is neither singularly pursuing its mission nor building the culture necessary to pursue it.

Reading the words of naval officials across various ranks, other questions arise: To what extent do these cultural problems plague our other governmental institutions? What about our corporations? What of our educational institutions?

One gets the sinking feeling the Navy’s problems may well be a microcosm of America’s problems; a symptom of our broader cultural maladies.

As I have argued ad nauseam, I firmly believe that if our nation understands the stakes of the challenges facing us at home and abroad, and we have the will, we can overcome anything. But if we succumb to Wokeism, adopting an ethos of national self-loathing, this will corrupt the American mind, and with it corrode our will and capability.

If we refuse to self-assess with clear eyes, and make massive, society-wide corrections, we set ourselves up for national failure.

Only an America oriented towards a mission consistent with our founding, and fostering a commensurate culture, will prevail in the struggles of the 21st century, foreign and domestic.

Ben Weingarten is a fellow of the Claremont Institute and co-host of the Edmund Burke Foundation’s “The NatCon Squad.” He’s the author of “American Ingrate: Ilhan Omar and the Progressive-Islamist Takeover of the Democratic Party” and is currently working on a book on U.S.–China policy and its transformation under the Trump administration.