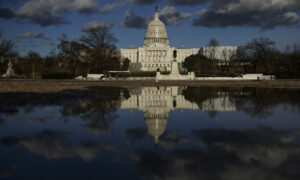 “You’ll regret this, and you may regret this a lot sooner than you think,” then-Senate Minority Leader Mitch McConnell (R-Ky.) told then-Senate Majority Leader Harry Reid (D-Nev.) in 2013 upon Senate Democrats’ invoking the “nuclear option” to prevent Senate Republicans from filibustering all lower-court judicial nominations. And so it was: In 2017, facing fierce Democratic opposition on the nomination of then-Judge Neil Gorsuch to replace Justice Antonin Scalia on the Supreme Court, then-Majority Leader McConnell galvanized Republicans to extend Reid’s precedent to Supreme Court nominees. Gorsuch, Brett Kavanaugh, and Amy Coney Barrett all ended up benefiting by means of razor-thin confirmation margins on the Senate floor that would not have been possible with traditional filibuster rules in place.

Fast-forward to 2021, and Democrats are now flirting with making precisely the same mistake they made in 2013. Earlier this week, President Joe Biden came out in favor of filibuster reform. Specifically, in an ABC interview, he appeared to endorse reforming Senate procedure to return to the “talking filibuster” made famous by the classic Jimmy Stewart film “Mr. Smith Goes to Washington.” “What it used to be when I first got to the Senate back in the old days, you had to stand up and command the floor. You had to keep talking,” Biden said. “That’s what it was supposed to be.”

To be sure, ending the Senate filibuster is hardly a fait accompli. Sens. Joe Manchin (D-W.Va.) and Kyrsten Sinema (D-Ariz.) have expressed reservations, and in a 50-50 deadlocked Senate, Democrats cannot afford to lose a single vote. But if they end up yielding to the already-escalating grassroots pressure and join their colleagues to end or “reform” the filibuster—more likely than not, this columnist thinks—Democrats may enjoy short-term gains but will regret their move just as quickly as they came to regret its 2013 predecessor.

First, the very nature of the Senate tends to structurally favor Republicans, given their current political and geographical coalition, in a way that the House does not. Republicans tend to dominate the more sparsely populated, culturally conservative flyover states, which means they can more easily attain a Senate majority without necessarily winning a majority of all popular votes cast over the course of the three election cycles that, combined, generate the Senate’s composition. In this respect, the Senate is similar to the Electoral College, another counter-majoritarian institution that has recently benefited Republicans more than Democrats—to wit, the 2000 and 2016 presidential elections.

Furthermore, the slowly changing nature of conservatism and the Republican Party may redound against Democrats’ interests. The post-World War II modern GOP has been a coalitional party sustained by cultural conservatives and economic libertarians, but more often than not, the party erred on the classical liberal side encapsulated by Henry David Thoreau’s line from his essay “Civil Disobedience”: “The government is best which governs least.” But ever since Donald Trump’s presidential election in 2016, the GOP’s classical liberal wing has faced a strong countervailing force in an ascendant nationalist/communitarian wing that is more willing to wield government power in the service of good political order to secure the common good. Thus, while the GOP of yesteryear may have been less eager to actually utilize a post-filibuster Senate to advance its agenda, the newer GOP would be more inclined to reward its friends and punish its enemies within the confines of the rule of law.

Perhaps most important, dispensing with the Senate filibuster would accelerate the Senate’s lamentable institutional decline. The “world’s greatest deliberative body” was, especially prior to the ratification of the 17th Amendment, intended to be a “cooling saucer” of sorts that filters out and soberizes the House’s hotter, intemperate passions. The filibuster, which is legally not a constitutional or statutory provision but instead merely a rule of internal Senate procedure, has nonetheless attained an ethos of quasi-constitutional status. Put another way, it is philosophically and intellectually downstream of the counter-majoritarian features that have attained constitutional status, such as the federalism and separation of powers constructs. In a sense, then, the Senate filibuster directly flows from James Madison’s famous discussion of “faction” in “The Federalist No. 10,” the most famous Founding-era writing on the insidious threat of majoritarian tyranny.

Nuking the Senate filibuster—something Republicans notably eschewed during their own Trump-era control of the Senate—would undermine the American political order, in which counter-majoritarian measures are deeply woven. But it would also be a shortsighted move, even from a cynical, partisan perspective. If dedication to James Madison doesn’t prevent Democrats from embarking on this misplaced crusade, perhaps their own long-term self-interest will.

Josh Hammer, a constitutional attorney by training, is an opinion editor for Newsweek, a podcast contributor with BlazeTV, of counsel at First Liberty Institute, and a syndicated columnist.

Biden started strong at UN, then bumbled his way into woke irrelevance

Parents Reluctant to Give COVID Shot to Their Kids