As Communist Party leader Xi Jinping begins an unprecedented third term with a team of loyalists, China faces an array of economic problems—financial strains, a collapse of the property sector, and the ill effects of COVID-19 lockdowns, just to name three currently attention-grabbing headlines.

One problem that gets little media attention but nonetheless may ultimately subsume all the others is the nation’s aging demographics. Because of years in which birth rates were below replacement, China now faces an intensifying shortage of young workers and hence a shortfall in the availability of the hands and minds needed for growth. By some estimates, the working-age population is already shrinking. China will seek offsets—artificial intelligence (AI) and robotics—but none can fully lift the economic burden of this expanding labor shortage.

China’s worker problem had its inception decades ago when Deng Xiaoping promulgated his one-child policy. Back then, China had a labor surplus. Some 90 percent of the population was of working age. Those eager hands and minds helped propel the fabulous growth that Deng’s market reforms permitted. But the one-child policy so constrained birth rates that by the 1990s, the flow of young people into the workforce began to ebb. By 2015, matters had become acute. In response, Beijing eventually eased the one-child policy. But it seems that the habits formed in previous decades kept birth rates low despite the change in the law. Even in the unlikely event that birth rates would pick up, it would take 15-20 years for these new births to make a difference in the workforce. In the meantime, the worker shortage promises to become more acute.

Matters even now are showing signs of strain. China today has about 3.6 people of working age for each retiree in the population. Those people must produce for their own needs, those of their personal dependents, and a bit less than one-third of the needs of each retiree. That is a heavy burden and leaves little surplus for the kinds of investments the economy needs to expand its production facilities, much less the kind of grand projects for which modern China has become famous. The strain is only going to get worse. By 2040, China is projected to have only 1.74 people of working age for each retiree, a much heavier burden on the nation’s labor resources.

Other economies are also seeking answers to aging trends, though none face anything quite as severe as China. Japan’s case is close. Europe, especially the United States, has turned to immigration as a partial solution. This answer is, of course, quite apart from the immediate problems on the U.S. southern border. Immigration, to provide any help easing demographic problems of this sort, should be legal and done with an eye to economic needs. Some countries have been more effective in this regard than others. China, in any case, has no access to an immigration answer to its labor shortage. It is neither open to immigration of any kind, nor is there any evidence that it would attract migrants if it were open to such an inflow.

Technological innovation could help. China, in recent years, has made great strides in AI and robotics. Undoubtedly, such advances will reduce the economy’s need for working hands and minds going forward. But there is only so far an economy can go with this sort of solution. Besides, demographics suggest that these sorts of advances will likely ebb in future years when they will become even more necessary than now. A summary of cross-country studies concluded that the most innovation comes from people between the ages of 30 and 40, a group that will decline over the next 20 years from 43 percent of the Chinese population today to 37 percent.

None of this is to say that China will disappear as a major power or that its economy will stagnate. What it does say is that demographics will impose an intensifying growth impediment and that it will demand imaginative policy responses. Neither Xi nor his leadership team offers much promise in this regard. Instead, as other columns in this space have made clear, this team shows an almost slavish adherence to rigid communist planning and centralized direction, in other words, the exact opposite of what China needs.

Milton Ezrati is a contributing editor at The National Interest, an affiliate of the Center for the Study of Human Capital at the University at Buffalo (SUNY), and chief economist for Vested, a New York-based communications firm. Before joining Vested, he served as chief market strategist and economist for Lord, Abbett & Co. He also writes frequently for City Journal and blogs regularly for Forbes. His latest book is “Thirty Tomorrows: The Next Three Decades of Globalization, Demographics, and How We Will Live.”

Progress and Its Deluded Enemies

Tough times ahead, send back the 7th Fleet 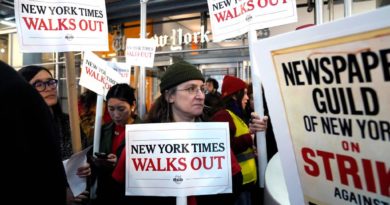 New York Times strikes while the irony is hot