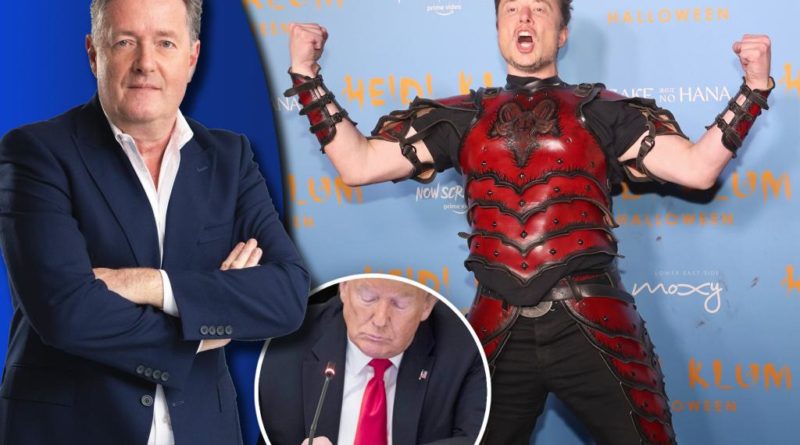 “Could all the people currently whining about ‘the death of Twitter’ since Elon Musk bought it…just leave Twitter?” I tweeted over the weekend.

To which Elon himself promptly replied: “Seriously.”

It was an exchange that I’m sure prompted a lot of whiny, woke brats to immediately throw their permanently offended toys out of their sanctimonious strollers and announce they were quitting the platform.

Because that’s what they’ve all been doing ever since the world’s richest man spent $44 billion on the social media site last month and vowed to make it a fairer playing field that doesn’t just treat anyone who even vaguely resembles a conservative like an enemy to be expunged from public view.

It reminds me of the deafening collective liberal squeal of outraged horror when Donald Trump got elected president in 2016, and myriad celebrities from Cher to Chelsea Handler said they would be leaving America immediately.

Of course, none of them did, and I confidently predict it will be just the same with all the stars now racing to say they’re quitting Twitter because the owner is someone who will no longer tolerate their cancel-culture bulls–t.

The hysteria has been hilarious to watch, not least because Musk is on the record as being a massive Bernie Sanders fan, has donated to both the Democratic and Republican parties, and has described himself variously as “moderate,” a “socialist” and “socially liberal and fiscally conservative.”

It’s true that he urged people to vote Republican in the recent midterms, but his reasoning wasn’t based on his own political allegiance: “To independent-minded voters: Shared power curbs the worst excesses of both parties, therefore I recommend voting for a Republican Congress, given that the Presidency is Democratic.”

I agreed with his logic.

The reaction has also been hilarious because Musk’s been reinstating accounts that belong to people from all political persuasions, from Donald Trump and Kanye “Ye” West to Dr. Jordan Peterson and Kathy Griffin.

Yet it’s only Trump’s return that’s getting most of the heat, and he’s not even agreed to come back anyway.

Griffin, a vile piece of work who once posted a photo of herself clutching a bloodied replica of Trump’s decapitated head, and who shamefully used her dead mother’s Twitter account to get round her recent ban for impersonating Musk (Twitter has always banned people who impersonate others), gets a pass because she’s a shrieking woke liberal.

In their world, you can be as horrible and abusive as you like, because it comes from the “right” side of the debate.

The self-righteousness is nauseating.

As is the blatant hypocrisy.

Whoopi Goldberg announced she was quitting Twitter live on “The View,” saying, “I’m tired of having certain kinds of attitudes blocked and now they’re back on.”

I wonder if she means the type of person who doesn’t think the Holocaust was an example of racism?

Oh wait, that was Whoopi, who got suspended for her very offensive idiocy.

She’ll be back, mark my words.

As will Stephen Fry, who’s quit Twitter five times only to return, and has now dramatically flounced off again with a Scrabble letter image spelling out “GOODBYE.”

Then there are those who vowed to quit — but haven’t.

Jameela Jamil, an insufferable, virtue-signaling actress, announced back in April: “One good thing about Elon buying twitter is that I will *FINALLY* leave and stop being a complete menace to society on here. So it’s win win for you all really.”

Yes, it would have been.

But sadly, she didn’t quit, and carried on tweeting her unpleasant abuse to all and sundry, and her account remains active today.

“Bring back Alex Jones!” urged one Twitter user about the repellent conspiracy wack job whose deliberate, hateful lies made Sandy Hook victims’ parents targets for lunatics who believed Jones’ invented claims that the massacre was faked.

“No,” was Musk’s blunt response, drawing his own personal line for what is acceptable under the guise of “free speech.”

He was right about that, just as he’s right to let Trump back on.

It was ridiculous that a former US president was de-platformed from a social media site that allowed Vladimir Putin, the supreme leader of Iran, and Taliban chiefs to stay on it.

What world leaders say, however offensive they or their words may be, is a matter of historical record.

Others who’ve embarrassed themselves since the Musk takeover include news organizations like CBS, which suspended all its Twitter usage due to “uncertainty” and “security concerns” but came crawling back within 48 hours without any of those concerns having been resolved, prompting Musk to post a giggling emoji.

He’s taken a similarly phlegmatic view of cowardly advertisers threatening to take away their business, again citing the “uncertainty,” but clearly bowing to woke hysteria — and urged them to be more “adventurous.”

And don’t even get me started on Congresswoman Alexandra Ocasio-Cortez, who preposterously claims she’s been trying to sell her Tesla for months because she wants a “unionized” green car, not one from a company owned by a “billionaire with an ego problem.”

Last time I checked, it’s very easy to sell a Tesla — they’re in big demand, like everything Musk creates, and as jobs will be at Twitter.

The current predominantly woke workforce have all been howling away because mean Elon wants them to actually go into work, and is firing all those who don’t fancy a bit of “extremely hardcore” slog to build a great company, or who he thinks have been to blame for the outrageously partisan culture that led to Twitter censoring the New York Post’s huge and accurate scoop about Hunter Biden’s laptop because employees feared it might cost Joe Biden the 2020 election.

The best assessment I’ve heard about Musk’s first few tumultuous weeks came from one of his most loyal investors, Ross Gerber, president and CEO of Gerber Kawasaki Wealth and Investment Management: “I think none of this has gone to plan. Zero percent of it. That’s how Elon works. That’s just the way he is. I’m never betting against this guy.”

Musk was dismissed as delusional and doomed to failure when he declared Tesla would take over the auto industry.

Skeptics said the same when he started SpaceX, a private company that launches satellites.

He was right again.

“He’s gone through this before and landed like a cat,” Erik Gordon, professor of strategy and entrepreneurship at the University of Michigan’s Ross School of Business, told NPR.

And he will again with Twitter, with the added benefit that this time he’s also exposing the woke brigade for the shallow, biased, hypocritical little twerps that I’ve always known them to be.

It’s enough to make me purr.

Donald Trump, Democrats obsessed with 2020, GOP should look to the future

The Agenda Behind Climate Change Catastrophism