Sure, you can say that only a few people are openly talking about one. The latest headline from the World Bank adds to a small list of official warnings. Everyone else in authority remains relatively sanguine, at least outwardly. But that’s how these things start.

Not too long ago, the word was taboo. Then a brave few actually said it. Today, it’s still only a few more, but already you can begin to feel the snowball advancing down the wet, hoary slope, where it will inevitably pick up weight and speed dangerously toward its ultimate end.

What is this thing?

World Bank President David Malpass is certainly no more mainstream than the institution he heads. And Malpass just the other day spelled it out, saying, “for many countries, recession will be hard to avoid.” He really couldn’t have said much else: in the institution’s long history, projections for global growth have never been reduced this quickly before.

Something is way off. And while the World Bank thinks it’s inflation, we’ve known all along that it never was. The R-word was, perhaps, inevitable in its place.

Markets have been pricing not inflation for well over a year. The U.S. Treasury yield curve quietly began flattening in some parts all the way back in February, with the rest joining in the weeks after (below). A flattening yield curve is a straightforward signal of market skepticism about growth and, yes, inflation. 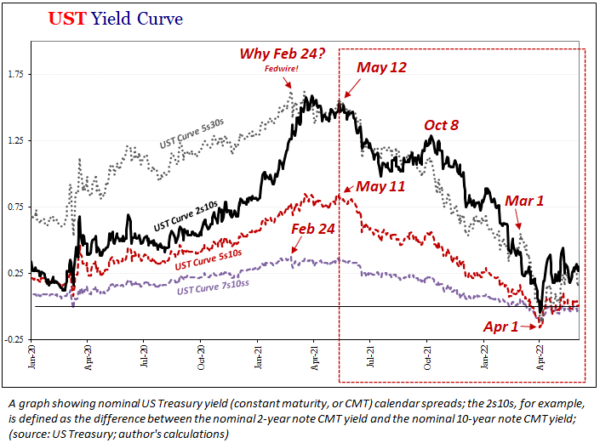 Had the financial winds turned more in that direction, the yield curve would have steepened more than it already had up to that point. Between August 2020 and February 2021—especially after the COVID-19 vaccines were announced in November 2020—that’s just what the yield curve had done.

This steepening had been a reflection of growing if modest optimism. It was never all that much: simply markets pricing a possible future beyond early 2021, which wouldn’t likely be as bad as what the world had previously confronted in 2020.

Had real inflation been injected into that small bit of positivity, the yield curve (and others) would have continued to steepen. Instead, it flattened from that early point onward.  Clearly,  the market thought that concurrent accelerating consumer prices were a result of processes other than genuine inflation (as the man said, Friedman—always and everywhere a monetary phenomenon).

Calendar spreads compressing on the yield and money curves specifically priced incremental doubts about both growth potential and just how sustained consumer price advances could be.

Big market players, the goliaths of global money and finance, even at that early stage had taken to hedging more and more—with fewer and fewer willing to bet against the hedges—about lower growth/inflation probabilities down the road.

The question thereafter focused on how far down the road.

It wasn’t just markets that were thinking this way. Economists, fake central bankers (there are not true central bankers left today; they are all economists nowadays), and the media all uniformly confused quickening consumer price indexes (CPI) for an overheating economy juiced up on “money printing.” However, even consumers (in the aggregate) had known the difference all along.

Like markets, various surveys of average Americans showed a clear rejection of sustained inflation. Short-run projections of consumer prices followed (rather than led) CPI rates last year and this year, while at the same time, longer-run expectations only moved a suspiciously small amount (below is one example). 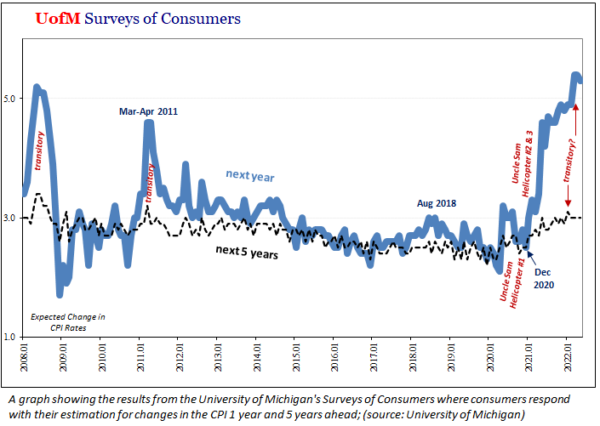 There were three primary reasons for rejecting inflation. First, money was never printed. No matter how many times the internet claims the opposite is fact, the only real fact comes from the monetary system itself (not the Federal Reserve) consistently, conclusively demonstrating a serious lack of useful money. (Collateral shortage is only where tight money began way back last year, having nothing to do with the Fed, let alone its rate hike theater).

Second, while fast-paced CPIs left the impression something similar was happening across the United States and global economy, the truth has been very different. This price illusion obscured another contrary fact: how the system wasn’t rebounding all that well from the unnecessary 2020 recession, the starting point for yield curve flattening (and tight money, funny enough).

Finally, the price illusion was created from nothing more than a (temporary) rightward shift in the demand curve (global fiscal interventions) at a time when supply was at its most rigid, its most inelastic. Much of that inelasticity was a product of products caught up in the supply chain’s limited capacity to move goods as flexibly and efficiently as it had before the world overreacted to the coronavirus.

Again, markets and consumers were well-aware of this situation, even if—as it is turning out—large companies were not. You would think the latter were better positioned to appreciate the real factors they were facing.  Yet time and again, business cycles have proved that corporate ignorance, combined with short-sightedness, dominates.

Quite simply, businesses went totally insane when ordering goods. Uncle Sam’s rightward shift in the 2021 demand curve flashed the dollar signs of opportunity before their collective eyes. The “logic” appeared sound: order as much as possible, from every producer out there—if only to increase the chance of getting anything through the supply chain mess. And do so while the consumer was red-hot (though not for services, which should have been a warning).

Every corporate cutthroat knew there would be a reckoning when this flood of additional inventory eventually reached home. However, no one worried much about it last year. After all, economists and central bankers (redundant) predicted this year would be nearly as red-hot; a prospect that hastening CPI rates appeared to confirm.

And this is where market and consumer skepticism had been, realizing no money was printed (eliminating actual inflation), and the economy was not really recovering. Given those two starting points, the eventual flood of inventory could only mean adding a heavy dose of negative pressure to an economy that was in no real shape to hold up (recession risk).

Inevitably, the painful “solution” to consumer prices was there all along. 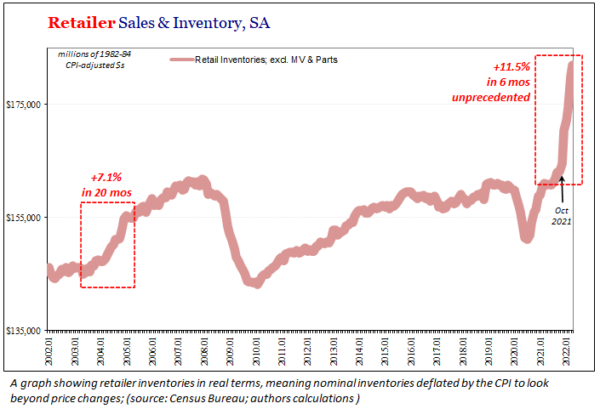 Don’t take my word for it.  Here’s what the Associated Press correctly surmised about big corporate retailer Target’s most recent inventory warning:

“Target is canceling orders from suppliers, particularly for home goods and clothing, and it’s slashing prices…”

It isn’t just the use of the word “recession” that will belatedly trickle down to a mainstream audience. More and more retailers (as well as wholesalers) far and wide will be forced to copy Target’s price slashing, as tight real money, lack of economic recovery, and the historic inventory imbalance all combine in the most inconvenient of timing.

That’s just what markets and consumers have been cautioning all this time.

Jeff is the Head of Global Research at Alhambra Investments. He is not an economist, which is probably why he’s been able to develop a working model of the global monetary system. His research is unique and informative in ways an economist would never consider.

Jen Psaki is the condescending face of the Biden administration