As a youngster growing up in the 1960s, Putin was a typical Russian hooligan, living with his family in a communal apartment in what was then Leningrad. Several other families, including Putin’s, shared these living quarters, with no bath, often no hot water and a stinking toilet. To get to his apartment on the fifth floor, young Putin had to run up the flight of stairs, infested by hungry rats. Armed with a stick, Putin at first fended off the filthy creatures and ran away from them, before he eventually decided to observe their behavior.

Putin spent hours studying these hordes of rats. Once, as he revealed in his official autobiography “First Person,” a “huge rat” he chased into a corner with a stick had nowhere else to go, so it turned around and attacked him. That frightened the future spymaster, and he was lucky to run away fast enough to elude his adversary.

During his life and career, Putin has had several “cornered rat” moments, which have shaped his thinking and behavior. Working as a KGB officer during the fall of the Berlin Wall in 1989, he stared down a mob of angry German citizens who broke into the Russian Ministry of Security (MGB) in Dresden.

At one point, Putin went outside to tell the protestors they were on the premises of a Soviet military organization. When the suspicious crowd demanded to know why a regular Soviet military officer spoke such good German, Putin lied and said he was a translator.

Putin requested armed backup forces, but was at first denied because “nothing could be done without orders from Moscow, and Moscow was silent.” Though Soviet military personnel eventually arrived and the crowd dispersed, the incident left a permanent mark on Putin.

“Nobody lifted a finger to protect us,” he recalls in “First Person.” “I got the feeling then that the country no longer existed. That it had disappeared. It was clear that the Union was ailing. And it had a terminal disease without a cure — a paralysis of power.”

This incident had a profound psychological impact on Putin. He realized that, if cornered and there’s nowhere to retreat, he must always be prepared to fight back and attack the opponent, like that rat from his childhood. He learned the same lesson as a rebellious kid, when he got into fights as early as seven years old with neighborhood boys.

“I just understood that if you want to win, then you have to fight to the finish in every fight, as if it was the last and decisive battle…you need to assume that there is no retreat,” he is quoted in another biography, “Vladimir Putin. Life History.”

A second event that scarred Putin was Saddam Hussein’s capture by US soldiers in 2003 and his subsequent death. After being convicted of crimes against humanity by the Iraqi Special Tribunal, Hussein was sentenced to death by hanging, and Putin was shocked by images of his execution, seeing the dictator’s eyes partly open and neck bent out of shape. Putin called it “atrocious, a barbaric execution,” and felt the US had deliberately toppled Saddam and his regime based on the false pretext of Iraq having weapons of mass destruction. Russia’s intelligence services knew that Saddam was bluffing about that, so Putin decided US intelligence was either incompetent for not knowing this, or reckless in acting on trumped-up justifications. Regardless, Putin decided that the United States was up to no good.

In October 2011, a third event shocked Putin: the death of Libya’s leader Moammar Khadafy at the hands of his own people. Khadafy, who called his subordinates “rats,” was caught by his own fighters like a rat in a drain under a highway. He was shot in the head and died before his security guards could reach the hospital. Putin was said to be shaken by this, with one CIA expert calling it “his worst nightmare.” Later, when Secretary of State Hillary Clinton admitted she joked about Khadafy’s death, declaring “we came, we saw, he died,” Putin was further convinced of America’s bad intentions.

Three months later, in December 2011, the biggest anti-government protest since the collapse of the USSR sprung up in Moscow. The uprising was sparked by Putin’s announcement that he would run for president a third time, after temporarily giving the reins to his former Prime Minister Dmitriy Medvedev. Around the same time, Clinton criticized the outcome of Russia’s parliamentary elections that gave Putin’s United Russia Party 50% of the vote. She insinuated fraud and called for “a full investigation.” Putin, in return, accused Clinton of giving a “signal” to the protesters. He became convinced the US was building an opposition movement within his own country to topple his regime.

He knows the United States sought the demise of Khadafy and Hussein, and he still fears that he is next.

When he hears US leaders’ claims that he is a mentally deranged madman or that American officials are calling for revolt among members of his inner circle, he sees himself as the cornered rat. This is why, instead of ratcheting down the conflict in Ukraine and seeking a settlement with Zelensky, Putin is still lashing out at the West, threatening nuclear warfare.

After the collapse of the USSR and Moscow’s silence in Dresden, the former KGB operative swore never to display weakness. He chooses brutality over submission, even if he has to annihilate Ukrainians, bomb maternity hospitals, and erase Ukraine from the map. With his survival now at stake, this rat will strike anything in its path to get out of its corner.

Rebekah Koffler is a former Defense Intelligence Agency officer and currently a strategic intelligence analyst with The Lindsey Group. She is the author of  “Putin’s Playbook: Russia’s Secret Plan to Defeat America.” 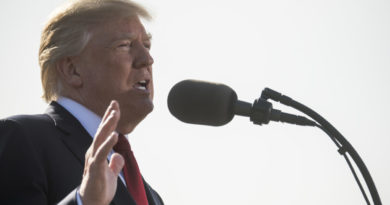 A Tale of Two Men

Newsom Recall, a Referendum on China