Now the First Amendment is under attack as collateral from America’s abortion wars. Los Angeles City Atty. Mike Feuer wants to ban the pro-life clinics that try to talk pregnant women out of having abortions. He is proposing an ordinance (pdf) that would add to the Municipal Code “the prohibition of misleading advertising by a pregnancy services center within the City of Los Angeles.”

But this is a clear violation of the U.S. Constitution’s First Amendment rights to freedom of speech and assembly. The California Constitution also guarantees, “Every person may freely speak, write and publish his or her sentiments on all subjects, being responsible for the abuse of this right. A law may not restrain or abridge liberty of speech or press.”

And notice the evasive language of Feuer’s proposal. Who is “a reasonable consumer”? And what is “Abortion Care”? The pro-life clinics insist they are providing such care—by caring for the mother so much they convince her to give birth to a beautiful, bouncing baby. And by providing the necessary prenatal care for the mother and baby.

In the 2020 election, I served as the press contact for the No on Proposition 14 campaign. Prop. 14 will issue $5.5 billion in bonds for Frankenstein-like research on aborted babies. We almost beat it, as it got just 51 percent of the vote, even though they spent millions and we spent about $40 to file the forms for the arguments on the ballot.

During the campaign, I got to know some wonderful people working in pro-life clinics. Typically, they are shoestring operations with low budgets. That’s unlike the abortion clinics that receive hundreds of millions of dollars in taxpayer money.

The pro-life clinics operate in poor areas near the pro-abortion clinics, hoping to save the babies—and the mothers. The pro-life clinics are operated by highly qualified obstetricians and nurses. They aren’t providing any “misleading advertising,” but a needed service. Most of the mothers they serve are poor Latinas and black women.

The Los Angeles Times “news” article is so biased and unsourced it’s a parody of journalism: “While it applies to any business offering pregnancy-related care, the proposed law is largely aimed at providers known as crisis pregnancy centers, which are often religiously affiliated and opposed to abortion. These crisis centers are commonly near or otherwise resemble reproductive health clinics and often deceive people by falsely advertising full reproductive care, including abortion.

“Many centers are typically staffed by untrained or unlicensed volunteers and employees, resulting in incomplete or inaccurate information that limits people from making grounded and timely choices about their reproductive care.”

The last link is to the Guttmacher Institute, a strongly pro-abortion “research” group.

The ludicrous Times “reporting” does bring up something else: the religious affiliation of many of these pro-life clinics. That means they’re also protected by the First Amendment’s right to freedom of religion.

At that link, he notes further the ordinance would “give women a private right of action if they are misled.” If that is upheld, it would shut down every one of these pro-life clinics. It would be easy to get a pro-abortion woman to say she was “misled” and file a lawsuit. These clinics, as I noted above, are not wealthy.

He adds, “Once typically low-income patients arrive, some centers have been reported to pressure pregnant women not to terminate their pregnancies, to provide nonmedical ultrasounds or to offer inaccurate information on reproductive health issues.”

Ironically, that statement itself affirms there actually is a baby inside the mother’s uterus. The pro-life clinic then shows the ultrasound picture to the mother so she sees it really is a baby—her baby. Which she soon will hold in her arms and nurse.

When my dermatologist recently removed a basal cell carcinoma from my head to examine it, I didn’t ask to see the microscope pictures. Those cells don’t matter. The “cells” we call a baby do matter—because it really is a baby.

What’s going here is politicians posturing in the wake of the U.S. Supreme Court decision throwing the abortion issue back to the states. Which is where it belongs because abortion is not mentioned in the U.S. Constitution. It likely will be in the California Constitution after Proposition 1 passes this November, unfortunately, even though abortion already is legal here.

But even if Prop. 1 passes, it does not cancel the First Amendment, which actually is in the U.S. Constitution. Feuer will be leaving office after voters pick a replacement in November. The City Council will decide whether to pass or reject his unconstitutional ordinance.

Meanwhile, these wonderful clinics will continue saving babies and mothers. 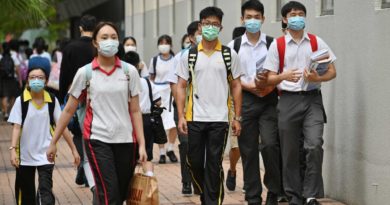 Do Hong Kong Youngsters Have a Future?