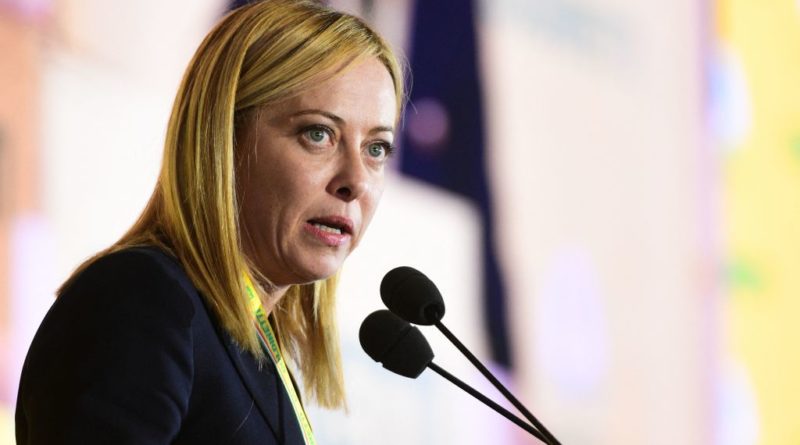 As we know, the reaction of many Western leaders to new Italian (and first female) Prime Minister Giorgia Meloni’s victory in the recent national elections varied from the downright deranged to the cold and aloof.

The Prime Minister of France, Elisabeth Borne, promised to keep a close eye on Meloni to ensure she respected Italy’s human rights because “in Europe, we carry a certain number of values” that include “respect for each other.”

Given its proximity of the island of Lampedusa to the African continent, Italy is on the front line of a wave of illegal migration that started in 2015 and never fully stopped.

Since the start of this year, 70,000 migrants have arrived on boats on the country’s shores, according to BBC News. Of course, the EU has not lifted a finger to help, and neither have its member states.

According to a 2019 agreement, when illegal immigrants dock at an Italian port, each member state is supposed to redistribute them to the tune of 3500 persons each.

I have cousins that live in the town of Ventimiglia, near the French border on the Riviera. They tell me that any illegal migrants that manage to cross the border simply get taken back to Ventimiglia by the French police, leaving Italy to deal with them.

French hypocrisy on this issue knows no bounds. Recently, Meloni decided enough was enough and barred a vessel, the Ocean Viking, carrying 230 illegal African migrants on board (including 57 children), from docking in Italian ports. It, therefore, had to dock at the French port of Toulouse.

French President Emmanuel Macron and his Interior Minister Gérald Darmanin described Meloni’s decision as, among other things: “selfish,” “unacceptable,” “a breach of trust,” and “a violation of international norms.” They also added that there would be “grave consequences” for bilateral relations.

However, Italian government MP Giorgio Mulè, has alleged that France has taken a grand total of 37 illegal migrants this year out of the agreed 3500. So the French may be the ones in breach of any norms and thus abdicating responsibility for a problem that involves all of Europe.

As it turns out, the Ocean Viking is a vessel that has been leased by the French NGO Sos Mediterrannée, along with Medicins Sans Frontiers, to pick up migrants making the dangerous crossing from Africa across the Mediterranean Sea.

However, the French contribution to the illegal immigration crisis goes even deeper. As Meloni pointed out herself in a recent television interview, French financial interests in poor African countries (and former French colonies) such as Burkina Faso mean that many of its people are exploited, kept in desperate poverty and therefore decide to make the dangerous journey to Europe, which then adds to Europe’s illegal immigration crisis.

During the television interview, Meloni held up a photograph of a young child working in one of Burkina Faso’s gold mines. Of course, child labour is illegal, but that does not stop it from occurring. Child miners in Burkina Faso who, according to a 2016 UN report number a third of all miners in the country, are paid a pittance as they squat on the ground clawing at dirt and rocks placed into bowls, all in the hope of striking gold for a little money.

Meloni explained: “This is a child who works in a gold mine in Burkina Faso. Burkina Faso is one of the poorest nations in the world. France prints colonial money for Burkina Faso, which has gold.”

Then Meloni concluded, tellingly: “So, the solution is not to take Africans and bring them to Europe. The solution is to free Africans from certain Europeans who exploit it and allow these people to live off what they have.”

Meloni once again told it like it is, pointing out so vividly and candidly the hypocrisy of those who pretend to care about poor people and the flood of illegal, economic migrants into Europe, yet instead, make people smugglers rich and paint anyone who objects to illegal immigration as racist.

Rocco Loiacono is a senior lecturer at Curtin University Law School in Perth, Australia, and is a translator from Italian to English. His work on translation, linguistics, and law have been widely published in peer-reviewed journals.

The Clouds of War