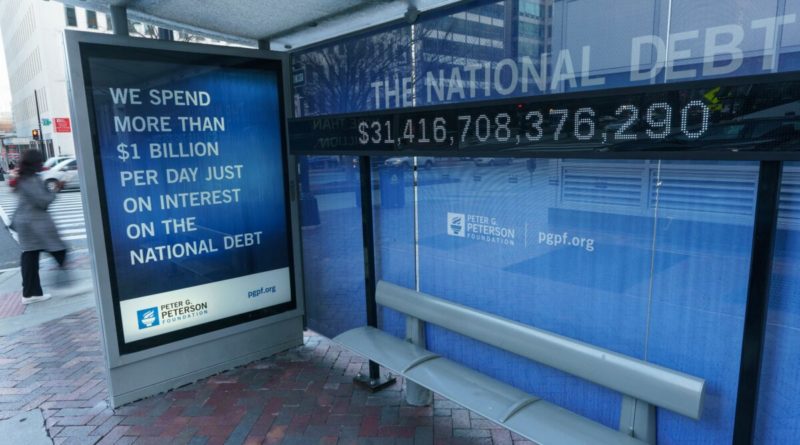 As tensions about raising the nation’s $31.4 trillion debt ceiling build, the headline that should be flashing in front of every American is that our country is not working.

Nothing is going to get fixed—really fixed—until we come clean about this basic, sad, and distressing fact.

How can it be that we have national debt equal to size of our entire $32 trillion economy? And where were we all when this happened? As recently as 2008, debt was 39.2 percent, rather than 100 percent, of our GDP.

One of the outcries that fueled the American revolution was taxation without representation. But this is exactly what is going on today. Who is on the line for this $32 trillion debt? You and me.

There are two ways that federal spending can be financed. Taxes or debt. Politicians don’t like taxation because they have to be honest with citizens that they are taking their money. Borrowing achieves the same end without asking.

The last thing Congress did before shutting down in the last session was pass another $1.7 trillion in spending. There were no taxes to pay for this. It gets layered onto the huge debt, which is on you and on me.

As economist Milton Friedman once said, “There is no such thing as a free lunch.” We pay for everything.

Instead of paying our bills honestly through taxes, we bear the burden of debt through inflation and slow growth.

We must appreciate that the discussion about debt and spending is not about accounting. It is about principles.

Our national crisis stems from straying from the basic principles upon which a free nation under God was founded.

Dishonesty, irresponsibility, and big government do not define a free nation under God.

About two-thirds of our annual spending consist of mandatory spending—entitlements. The rest is discretionary spending and interest paid on the debt.

But the label “entitlement” is a government label for payments that are mandatory for the government to make, as opposed to discretionary spending, like, for instance, defense spending.

Those who think this a personal right should ask if they are entitled to get out from the system. And the answer is, of course, no. The government remains entitled to make you pay payroll taxes and then make payments to you when you retire. Government decides what those taxes and payments will be.

And here we have more dishonesty.

Social Security is broke. According to the system’s trustees, there are insufficient funds to meet obligations beginning 2034, 11 years from now. Every young American entering the workforce now must pay taxes into a system that does not have the resources to pay promised benefits.

There is a lot of rhetoric whether entitlements should be part of the debt ceiling negotiations. And I agree, no. Not because these programs aren’t broken. But it is too complicated to fix in overnight negotiations.

Fixing Social Security should not be about cuts but about reform and changing the whole system.

The system is broken because it is not based on American principles of ownership and personal responsibility. It is based on government dependence.

Every American could earn far more, without taking on unnecessary risks, if they could take ownership of their payroll taxes and invest in a personal retirement account.

We have dishonesty and irresponsibility rampant because we have allowed government to take over so much of our lives in a country where individuals are supposed to be free and responsible only to their Creator in Heaven.

It’s time for big changes in America. The only choice is whether we want to have a future or not.

Star Parker is the founder and president of the Center for Urban Renewal and Education (CURE) and host of the new weekly news talk show “Cure America with Star Parker.”

A Personal Review of ‘Political Ponerology’

The Everett Railroad Brings Back the Magic of the Steam Engine

Vladimir Putin shouldn’t be a hero to the American right