Gov. Kathy Hochul proposed a shockingly irresponsible budget in January, but her election-year deal with lawmakers last week made it far worse.

The bottom line tells much of the story: Spending is now pegged at $220 billion — up a jaw-dropping $47 billion (27%) from fiscal year 2020. Yes, a good chunk of that is coming from Uncle Sam, but New Yorkers will be on the hook long after federal aid runs out.

Still, it’s the deal’s 11th-hour, stealth giveaways — to labor groups, in particular — that reveal the true depths of Albany’s cynicism. As Empire Center fiscal expert Peter Warren notes, unions made out like bandits, as Hochul looks to their support in the November election.

Consider: The agreement actually rolls back some modest reforms to pension plans that had begun to generate considerable savings — $1 billion last year alone. The reforms were a critical step toward defusing a pension time bomb that had seen government-pension costs balloon from $1 billion in 2000 to $17 billion in 2015.

Those tweaks, passed in 2010 and 2012, pushed vesting time for new workers from five to 10 years and required higher-earning employees to contribute more to their retirement plans. Yet last week’s deal flipped the time back to five years and scrapped the use of overtime pay in calculating employee contributions. That not only shifted more costs to taxpayers but also restored an incentive for employees to abuse OT, another hit on the public.

Why the shift? As Warren notes, the state faces no recruitment crisis, and New York’s pension benefits, even after the reforms, were more generous than those in the private sector. Yet the unions never ceased griping, and this year they managed to roll an accidental governor facing an election.

Labor groups were huge winners in many other ways, too. Hochul’s Buffalo Billion, a ghastly last-minute mega-subsidy to the wealthy out-of-state owners of the Buffalo Bills for a new stadium, includes requirements that’ll swell building costs 20% to benefit construction unions. Similar “prevailing-wage” rules would apply to projects funded by the proposed $4.2 billion environmental bond.

The budget also sets aside billions for health-care workers, plus a $1.3 billion handout for the film industry over three years. And state money to enroll illegal immigrants over 65 in Medicaid, plus monster spending hikes for education. And on and on . . .

At this rate, surely Hochul & Co. will soon run out of other people’s money. Alas, don’t expect that to stop them. 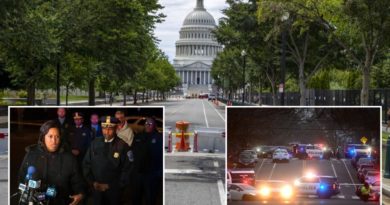