President Joe Biden’s announcement that the United States would ban Russian oil imports in response to the attack on Ukraine was met with serious concern from both sides of the aisle because of the impact it could have on already record high gas prices. This criticism is valid—and, to be fair, Biden acknowledged in his announcement that gas prices will continue to rise.

But Biden is likely grateful for a scapegoat to blame for higher energy prices. Though turmoil in Europe is consuming news cycles, prices had already been climbing steadily for months. Russia’s war on Ukraine will have an impact, but it was far from the first domino in the chain. Biden’s radical climate policies had already done much of the damage.

The solution to our energy problems, war or no, lies right here on—and just off—our shores, if the Biden administration will get out of the way and let American energy producers flourish.

It wasn’t long ago that America was energy independent. In 2019, the United States became a net energy exporter for the first time—finally achieving the mission that brought about the creation of the U.S. Department of Energy (DOE) in the 1970s. After achieving net export status, even the Iran missile controversy barely affected our oil prices. DOE estimated that America’s newfound energy dominance saved the country more than $200 billion a year—a healthy $2,500 annually for the average family of four.

But since President Biden took office, all that progress has been undone. The price of oil has doubled in the last year (at which point prices had already recovered from a pandemic-induced slump), and our dependence on foreign crude oil imports has increased. It took less than a year of Biden’s anti-American energy policies to strangle our energy industry once again. If the federal government continues making climate conformity its priority—and Biden keeps nominating radicals like Saule Omarova and Sarah Bloom Raskin, who overtly pledge to destroy the fossil fuel industry—we can expect more of the same disastrous effects.

The Russia crisis will exacerbate prices—but we were already headed down this road.

We shouldn’t be surprised by this. The disastrous consequences of the anti-energy agenda have been unfolding in Europe for years. Germany, supposedly the world’s leader in the “renewable transition,” has seen energy costs rising steadily for years and now pays the highest prices in the entire European Union. The country is now subsidizing coal and is dependent on heavily polluting biomass (also known as burning wood) when the wind doesn’t blow. It’s not unusual for a German today to pay more for utilities in a month than they used to in a year.

Likewise, in the United Kingdom, energy price caps are scheduled to increase a painful 54 percent next month. Freezing deaths were already on the rise as low-income Brits struggled to keep their homes at safe temperatures in the wintertime. The consequences of further cost increases could be deadly.

But even if we’re not up-to-date on current events across the globe, we’ve been told point-blank by our elected leaders what their agendas would do.

On the campaign trail in 2008, President Obama boldly declared to the nation: “Under my plan… electricity rates would necessarily skyrocket.” Somehow, we were just supposed to be okay with that. President Biden’s plans to follow in Obama’s anti-fossil footsteps—and even take the radical climate agenda further—were crystal clear from the get-go. We’re simply witnessing firsthand the consequences to Biden’s “whole of government approach” to radical environmental politics.

So what can we do? For once, the answer is remarkably simple.

We can get the federal government out of the way and allow America’s energy producers to thrive. The United States has massive oil reserves capable of powering our nation (and our freedom-loving allies) for decades at least, and technological innovations mean we’re growing our reserves far faster than we’re depleting them.

And despite the anti-fossil fuel rhetoric perpetuated by culture and the media, we produce energy more responsibly in America than anywhere else in the world. We’ve become a global leader in clean air, cutting harmful pollution by 78 percent since 1970, even while our economy and energy usage have grown significantly.

Instead of ceding power to foreign oil producers, most of whom operate with little regard for the environment or human rights, we should unleash the full power of the American energy industry to improve our quality of life, reduce costs, and promote freedom around the world.

Ultimately, President Biden’s decision to ban Russian oil matters little to the price we pay at the pump. But if his anti-energy policies continue unchecked, filling up our tank to get to work or school will be painful for many years to come.

The Honorable Jason Isaac is director of Life:Powered, a national initiative of the Texas Public Policy Foundation to raise America’s energy IQ. He previously served four terms in the Texas House of Representatives. 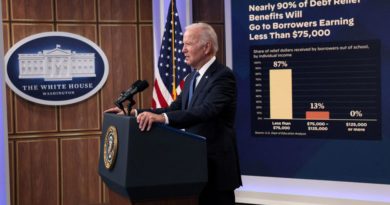