As Russia rolls over Ukraine with the only Western response being increased sanctions, the question arises: Is this the beginning of a new world order, where nations may invade with impunity?

More specifically: Will Washington and its allies react any differently if the next aggressor is China, and the next target Taiwan?

Like Ukraine, Taiwan is a US security partner not protected by any formal treaty. The Taiwan Relations Act requires the Pentagon to support Taiwan’s efforts to protect itself but does not mandate the US military defend Taiwan if it comes under attack.

Under today’s policy of “strategic ambiguity,” the White House or congressional leaders could consider arms sales and training sufficient to satisfy the Taiwan Relations Act’s obligations and question whether the United States should defend Taiwan against a Chinese invasion.

Moreover, if China pursued less-escalatory options like blockading Taiwan’s ports or occupying its outlying islands, it is unclear if the US military would be directed to intervene.

Taiwan has some additional strikes against it. Ukraine is widely recognized as an independent nation enjoying diplomatic relations with more than 100 countries yet still faces Russian aggression alone. In contrast, the government in Taipei is only formally recognized by 15 nations, with most countries — including the United States — accepting China’s characterization of Taiwan as a breakaway republic. If Ukraine is any example, few countries may feel compelled to defend Taiwan if Beijing attacks.

The bright side for Taiwan

But there are some reasons for hope. Taiwan is separated from mainland China by about 90 miles of water, making an invasion challenging and more obvious than Russia’s slow buildup across Ukraine’s eastern border during the last decade. And although Taiwan is not optimized for the defensive mission, its attack helicopters and warships are arguably better suited to counter Chinese amphibious forces than Ukraine’s military is against Russia’s precision missiles and high-end aircraft.

More encouraging is the increase in countries informally aligning themselves with Taiwan. Japanese leaders last year began openly discussing the importance of an independent Taiwan to Japan’s security. Japan’s southernmost islands are only about 60 miles from Taiwan, making them easy pickings for China were Beijing to gain control in Taipei. Japan began fortifying outposts in the area to guard against Chinese aggression, but leaders in Tokyo recognize their efforts will fall short once the People’s Liberation Army can use Taiwan as the world’s largest aircraft carrier.

Australia joined Japan last year in voicing its intention to help US forces defend Taiwan from Chinese attack. Although Australia is far removed from the Taiwan Strait and East China Sea, its leaders recognize the threat posed by China undermining the American-led security architecture in the Indo-Pacific. And Canberra is also keenly aware of China’s regional aspirations, given the ongoing trade war Beijing is waging against Australia. A Chinese regime without Taiwan as a concern would undoubtedly turn its sights on other targets in the South China Sea and Indian Ocean.

Despite these green shoots of deterrence, Japanese and Australian support for Taiwan hinges on the United States taking the lead. Pulling a page from Russia’s playbook, Beijing could sideline US forces by “salami slicing” pieces of Taiwan over the next several years until Taipei capitulates or it mounts an invasion to test America’s resolve.

When that time comes, Washington will need more than financial slaps on the wrist to keep China from unraveling Indo-Pacific security. Beijing is watching what’s happening in Ukraine. Reports suggest they are even encouraging it. Is this really the lesson the United States wants our adversaries to take?

Bryan Clark is a senior fellow at the Hudson Institute and director of the Hudson Center for Defense Concepts and Technology. 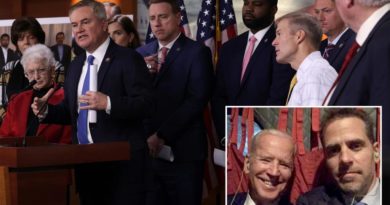 Space War Is Real and China Wants to Lead