A mother gave her 8-year-old daughter $20 to spend at a theme park. The child—let us call her Nancy—wanted to buy a colourful T-shirt with her money. The mother, who had also prepared a delicious lunch box, chaperoned her excited child.

At lunchtime, the child observed other children eating luscious chips, and she asked her mother to buy her a punnet of chips. But the mother said: “you have $20, so you can buy the chips yourself, but remember: if you do buy the chips, you won’t be able to purchase your favourite T-shirt you wanted to have.”

Nancy reflected on her mother’s admonition, and she grudgingly resisted her urge to purchase a punnet of chips, instead eating the lunch prepared by her mother because she did not want to miss the opportunity to acquire her favourite T-shirt, which she then proceeded to buy with her cash.

Is this a familiar scenario? If so, readers might characterise it as a powerful example of how to stimulate a child’s decision-making powers about how to spend their cash money.

The cash was physically in Nancy’s pocket, and if she had bought chips, she would have noticed that the cash money had dwindled to about $13, not enough to buy the T-shirt. Nevertheless, after reflecting on her predicament, Nancy concluded that the long-term benefit and joy derived from having the T-shirt outweighed the intense but short-term gratification the chips would have provided.

There is, however, a more important reason as to why this familiar scenario is relevant in today’s society.

Nancy was able to decide on how best to spend her money because she had cash in her pocket. She would have noticed the reduced cash amount if she had bought the chips.

However, her ability to choose between the chips and the T-shirt might have been compromised if she had only access to a form of digital money, for example a credit card, using tap-and-pay technology. This is because the use of such a modern way of payment might give the impression that everything is free and can be obtained with the tap of a card.

Indeed, the elimination of cash money and the creation of a cashless society might obviate the need for children to make wise and considered choices and adversely affect their capacity to prioritise their spending habits. In the scenario above, it is the availability of cash money that made it possible for Nancy to reflect on her spending priorities.

There is a proliferation of modern electronic payment methods that involve the use of digital money, with debit and credit cards habitually used in society. Nowadays, it is no longer necessary to travel overseas or intra-state with vast amounts of cash tucked away in the linings of travellers’ clothing, as sometimes occurred in the past.

Investopedia describes digital cash, or digital currency, as “any means of payment that exists in a purely electronic form”, which include uses of “modern technology, including credit cards, debit cards, smartphones, and online cryptocurrency exchanges.”

Parents are worried about the ready availability of digital cash. Moreover, they are concerned that this unstoppable development may have deleterious consequences for their children’s financial education.

For example, Claer Barrett, writing in the Financial Times, noted her concern about “the invisibility of digital transactions versus the physicality of notes and coins.” She asks whether “children realise that actual money is being spent, or think this “magic card” simply makes everything possible?

Moreover, parents know that cash money is a great tool for learning early numeracy. So, from an educational point of view, cash money should not be replaced or supplanted by digital money.

Even a perfunctory review of the financial literature reveals that the inexorable march to a cashless society is already in an advanced state.

A recently published White Paper endorses the view that “financial literacy is one of the greatest challenges facing families” and that the education of children and young people in the sound management of personal finances is a “cornerstone of economic and societal stability.”

To this purpose, it advocates the creation of “family wallets,” which enable young people to make financial decisions that can be supervised by their parents through setting limits on spending.

Banks are also well aware of the need to educate children about monetary management. For example, the Commonwealth Bank of Australia acknowledges that “helping children make the connection between cash and ‘invisible’ or online money and how they work is a challenge many parents face.”

Not surprisingly, considering the challenges of reining in the spending habits of their children, parents still prefer to give them cash money.

Anthony Keane, commenting upon parents’ concerns about their children’s digital money habits, notes that “as digital spending surges with apps, tap-and-go technology and other cashless methods, 39 percent of parents say they are concerned their kids don’t know enough about it.”

Considering the challenging financial environment, endangered by ever-present attempts to hack into peoples’ accounts and the proliferation of sophisticated scams, the advice given by Nancy’s mother to her child was most appropriate.

Cash money should not be replaced with digital money because, otherwise, an important educational tool would be abandoned to favour appealing but facile methods of payment.

Gabriël A. Moens AM is an emeritus professor of law at the University of Queensland, and served as pro vice-chancellor and dean at Murdoch University. In 2003, Moens was awarded the Australian Centenary Medal by the prime minister for services to education. He has taught extensively across Australia, Asia, Europe, and the United States. Moens has recently published two novels “A Twisted Choice” (2020) and “The Coincidence” (2021). 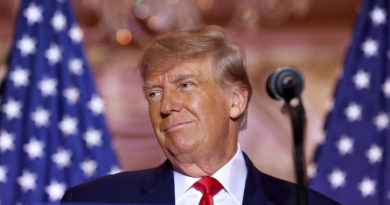 Does Trump Really Want to Be President Again?

Made in Mexico, Engineered in China