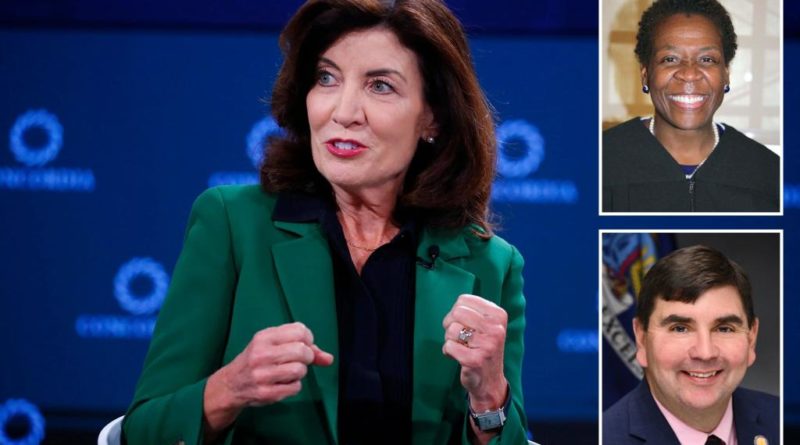 
Even though she’s just won in her own right, Kathy Hochul — the first woman elected New York governor — still isn’t standing up to the Legislature. As soon as Democrats won a last state Senate seat, clinching a veto-proof “supermajority” in that chamber as well as the Assembly next year, she reportedly dropped her request that lawmakers rein in the no-bail rules in exchange for her signing off on a huge pay hike for legislators.

Has she no spine at all? Even left-leaning outsiders like the Times Union editorial board are calling this pay hike outrageous.

And Sen. John Mannion’s win (by just 10 votes) doesn’t impact the current Senate supermajority, which is the one relevant to the pay-hike vote (and potential veto override). She could still threaten to veto the 29% salary increase to $142,000 (for a Legislature that’s only in session half the year) on Christmas Eve.

That would at least force lawmakers to do the apparently unthinkable and return to Albany next week to try for an override.

Plus, enough lame-duck and moderate Democrats might back the veto. (And that holds true for any veto overrides next year, too.)

Dems’ supermajorities would matter more if the gov were a Republican: It’s a lot easier for moderate Dems to side with a Democratic governor if she’s facing down the loony left.

If Hochul’s ever going to push hard on criminal justice fixes, this was one of her best shots. Her next big chance won’t come for months, during budget negotiations.

She blinked at that point this year, winning only minor reforms to the disgraceful no-bail and discovery disasters. Blinking again now suggests she won’t get tough even after winning the voters’ endorsement as chief executive.

One positive sign: She stood up to the hard left Thursday by tapping moderate Hector LaSalle to be the state’s next chief judge — and so stopping progressives from utterly dominating the Court of Appeals, New York’s top court.

But even then she hedged, announcing a “ticket” whereby the chief administrative judge post would go to Edwina Richardson-Mendelson, a lefty favorite. Does she really expect that to satisfy the Democratic socialist crowd, or think that the insurance was necessary to avoid the Senate blocking LaSalle from becoming New York’s first Latino chief judge?

Caution is one thing; these endless concessions are another. Every time the gov dodges a fight, expectations grow that she’ll always be a punching bag.

The sooner Hochul picks some meaningful ground to fight to the end on, the better off she (and all of New York) will be.

Pax Americana Unravels at the Feet of China

A Victory Against Tyranny