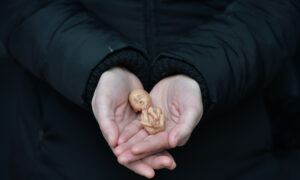 The news rocked the scientific world. Mouse embryos were successfully developed half-way through the normal gestation period using artificial wombs. Scientists were ecstatic. The New York Times reported: “The mouse embryos looked perfectly normal. All their organs were developing as expected, along with their limbs and circulatory and nervous systems. Their tiny hearts were beating at a normal 170 beats per minute.”

Meanwhile, scientists involved in human embryonic research are moving at a fast pace toward the same place as the mouse artificial uterus experimenters. Researchers currently work under a voluntary guideline known as the “14-day Rule” that requires embryo experimenters to cease their studies and destroy their research embryos after two weeks.

When enacted, the rule was much less than met the eye since scientists could not maintain embryos outside a woman’s body for longer than two weeks anyway. Thus, scientists pulled a fast one. They assured a wary public that their work would be strictly limited in scope without giving up anything that they could then actually accomplish.

Such experimentation has now proceeded to the point that embryos will soon be able to be maintained for longer than 14 days. And surprise, surprise! “The scientists” now want to trash the 14-day rule and allow nascent human life to be experimented upon much farther along in their development. Such processes will almost surely require using artificial wombs.

Much of this future experimentation will involve learning how to eugenically manipulate babies. From the MIT Technology Report story on growing calls to trash the 14-Day Rule: “Scientists are motivated to grow embryos longer in order to study—and potentially manipulate—the development process … New experiments “‘might ignite abortion debates,’ especially if the researchers develop human embryos to the point where they take on recognizable characteristics like a head, beating heart cells, or the beginning of limbs.”

It should stimulate debate! We are not talking about “beating heart cells” but the human hearts of nascent human beings. And contrary to the Technology Report story, these ethical questions have nothing whatsoever to do with abortion since no woman would be required or asked to do anything with her body. The question that these experiments thus force us to face—and answer—is whether unborn human life has any intrinsic moral value, and if so, its extent.

Some pro-lifers hope this technology could save babies from abortion. But before we even get to that issue, the question has to be considered whether developing human artificial wombs could even be accomplished ethically.

Frankly, I don’t see how. Perfecting such a machine would entail the mass creation of human embryos and their repeated destruction in experiments as researchers strived to maintain the embryos for ever-longer time periods, indeed, eventually well into the fetal stage.

This would be human experimentation of the rankest sort, with living fetuses maintained in an artificial environment, not for the purpose of being born or learning how to save babies in danger of being stillborn—but also as being akin to lab rats, for example, used as sources of organs for transplantation, a prospect already discussed in bioethics known as “fetal farming.”

Are we really willing to go that far? I fear we may because we already have.

Back in the late 60s, researchers conducted experiments on born “aborted” infants kept alive for experimentation. Please excuse the graphic description of one of these experiments that follows as reported by Pamela R. Winnick in her book “A Jealous God.”

She writes: “In a 1968 study called the ‘Artificial Placenta,’ a twenty-six week old fetus, weighing more than a pound, was obtained from a fourteen-year-old girl, presumably from a therapeutic abortion. Along with fourteen other fetuses, it was immersed in a liquid containing oxygen and kept alive for a full five hours.”

Winnick then quoted from the study itself: “For the whole 5 hours of life, the fetus did not respire. Irregular gasping movements, twice a minute occurred in the middle of the experiment but there was not proper respiration. Once the profusion [pumping in of oxygenated blood] was stopped, however, the gasping respiratory efforts increased to 8 to 10 per minute … After stopping the circuit, the heart slowed, became irregular and eventually stopped … The fetus was quiet, making occasional stretching limb movements very much like the ones reported in other human work … [T]he fetus died 21 minutes after leaving the circuit.”

After these ghoulish experiments became known publicly, they were stopped by an outraged Congress–led by Senator Ted Kennedy, of all people–which prevented National Institutes of Health funding of such experiments.

But that was when the sanctity of life held greater sway. Would the country erupt in the same revulsion today at such experiments? I wonder.

Indeed, the ground is already being prepared to permit experiments on living fetuses to resume. For example, Vermont recently enacted a statute that states, “A fertilized egg, embryo, or fetus shall not have independent rights under Vermont law.” Again, this has nothing to do with abortion. That provision can only mean that any embryo or fetus can be put to any instrumental use whatsoever without legal consequence.

The time to decide whether we want to go down this utilitarian road should be before we actually get there, not when the ethical crisis is upon us and there is no time to think. At the very least, we need to enact a legally enforceable moratorium preventing live fetal experimentation to give the world time to sort out the ethics of pursuing such technologies in humans through democratic deliberation. Just floating along and letting “the scientists” decide the moral propriety of fetal farming simply will not do.

Facebook doesn’t care about doing the right thing at all