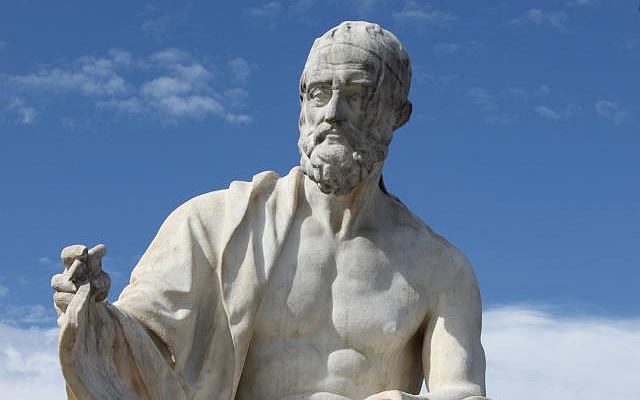 After the death of Alexander the Great in 323 B.C.E., the conqueror’s generals carved out large kingdoms for themselves in Asia, Egypt, and southeast Europe. Greece remained fragmented, and therefore subject to encroachment. For self-protection and other common functions, Greek city-states formed confederations among themselves.

Into this world—the Hellenistic world—Polybius was born about 200 B.C.E. His father served as the chief magistrate of the town of Megalopolis, located in the central Peloponnese. Megalopolis was, along with other Peloponnesian towns, a member of the confederacy known as the Achaean League.

By the time Polybius was 30, he had become an important city official. However, his political career was cut short when the Roman Republic, determined to ensure the loyalty of the Achaean League, demanded 1,000 well-born Achaeans as hostages. Polybius was transported to Rome.

Fortunately, the Romans treated the hostages well, granted them a considerable amount of freedom, and eventually released them. During his indulgent captivity, Polybius became a mentor to, and good friends with, Scipio Aemilianus Africanus the Younger. Scipio was a supporter of scholarship, and through him Polybius became acquainted with some of Rome’s leading academics. When Scipio led the army that destroyed Carthage in 146, Polybius accompanied him.

In subsequent years, Polybius visited Egypt, Spain, southern Gaul (France), and Asia Minor (Turkey), and he followed Hannibal’s route across the Alps. He also served as captain of a voyage of discovery, sailing outside the Mediterranean and down the Atlantic coast of Africa. In addition, Rome employed him as a diplomat. He negotiated the final terms of settlement between Rome and the Achaean league. He died in about 118, at approximately age 82.

Men (and women) of action usually make better historians than do purely academic types. As you can see, Polybius was a man of action.

Polybius’s most important composition was his “Histories.” Polybius composed this work to explain to his fellow Greeks how, in a scant period of 53 years, Rome had swelled from a merely Italian power to become the arbiter of the Mediterranean world. Of necessity, Polybius related not only the history of Rome, but of some other countries as well.

Because of his standing among the Greek and Roman elite, Polybius enjoyed access to libraries and official records throughout the Mediterranean. His standing encouraged eyewitnesses to submit to his questioning about events they had seen. These advantages, plus diligence, persistence, and a keen mind, made his historical work extraordinarily valuable. Writing over 60 years after Polybius’s death, the Roman statesman and scholar Cicero called Polybius the most chronologically accurate of all historians.

Only the first five of Polybius’s 40 “books” (scrolls) have survived in their entirety. However, we have long excerpts from the remainder of his work.

Plato and Aristotle had classified “good” constitutions as either monarchies, aristocracies, or popular governments. They had described how these systems tended to deteriorate into bad “deviations”—tyrannies, oligarchies, and extreme democracies (mob rule). However, Aristotle predicted that a constitution that properly mixed monarchy, aristocracy, and democracy could avoid deterioration.

Polybius saw proof of Aristotle’s theory in the durable constitutions of Sparta and Rome. In a famous passage on the Roman constitution, he described how it contained elements that were (1) monarchical (the consuls), (2) aristocratic (the senate), and (3) democratic (the popular assemblies). He further described how each branch checked the others.

Polybius also described the governments of the Greek confederacies. The American Founders, in their efforts to create a federated republic, found these descriptions particularly useful.

Polybius at the Constitutional Convention

Literate people in the founding generation agreed with Cicero’s high opinion of Polybius. James Madison relied on him in preparing a research memorandum for the Constitutional Convention, Madison’s “Notes on Ancient and Modern Confederacies.” Moreover, as I mentioned in earlier essays in this series, the first volume of John Adams’s “Defence of the Constitutions of the United States” circulated at the Constitutional Convention, and Adams emphasized Polybius’s remarks on the importance of a “mixed” constitution. Adams also quoted the historian’s observations on the governments of ancient Carthage, Rome, and the Greek city-states and confederations.

Although the surviving convention records don’t mention Polybius explicitly, his influence can be traced from convention discussions about the Greek confederacies. Among the delegates referring to those confederacies were, besides Madison, Alexander Hamilton, Luther Martin, Roger Sherman, and James Wilson. Another delegate, John Francis Mercer of Maryland, later wrote in an essay asserting that Polybius was unsurpassed as a historian.

Polybius in the Ratification Debates

After the drafting convention finished its work on Sept. 17, 1787, George Washington, its president, transmitted the proposed Constitution to the Confederation Congress. Congress, in turn, sent it to the state governments, asking that they authorize the election of state conventions. Each state’s convention would decide whether to ratify the document.

In the ensuing public debate, both sides looked to Polybius’s “Histories” for ammunition. Thus, the Antifederalists—the Constitution’s opponents—argued that if the document were ratified, its checks and balances would collapse and the government would degenerate into an aristocracy or oligarchy. In support of this prediction, an opponent writing under the name “Sidney” quoted Polybius on how political systems decline. And James Monroe—later president but then a moderate Antifederalist—relied on Polybius to argue that Rome’s “mixed” system worked only because of its foreign wars. Without those wars, Monroe said, Rome’s government would have lost its balance.

On the pro-Constitution side, Alexander White—a prominent Virginia lawyer, ratifier, and (later) member of Congress—foretold that Americans would preserve their liberty so long as they could elect their officials. He relied on Polybius’s description of the Roman republic.

Madison argued that the Constitution wouldn’t produce aristocracy because in mixed governments the democratic branches generally dominate. He pointed to ancient Carthage, “whose senate, according to the testimony of Polybius, instead of drawing all power into its vortex, had … lost almost the whole of its original portion.” Madison also wrote a letter to Thomas Jefferson lamenting that the Constitution had not granted the federal government even more authority—specifically a congressional power to veto state laws. Basing his position “on the authority of Polybius,” Madison alluded to two Greek confederacies to show that their central governments didn’t have enough power to hold together their component city-states.

More on Polybius and James Monroe

Madison and Monroe later would become political allies, but in 1788 they were on opposite sides of the debate over ratification of the proposed Constitution. In one of his speeches to the Virginia ratifying convention, Monroe contended that, with some changes, the Articles of Confederation would be sufficient for the new nation. His speech further illustrates how participants in the ratification debates relied on Polybius. Here is a portion of Monroe’s speech as recorded by the Virginia convention’s shorthand reporter:

“‘The Achæan league ha[s] more analogy to ours [i.e., the Articles of Confederation], and gives me great hopes that the apprehensions of Gentlemen with respect to our Confederacy are groundless. They were all Democratic and firmly united. What was the effect? The most perfect harmony and friendship subsisted between them, and they were very active in guarding their liberties. The history of that confederacy does not present us with those confusions and internal convulsions, which Gentlemen ascribe to all Governments of a confederate kind. The most respectable historians prove this confederacy to have been exempt from those defects.’— (Here Mr. Monro read several passages in Polybius, tending to elucidate and prove the excellent structure of the Achæan league, and the consequent happy effects of this excellency.) He then continued—‘This league was founded on Democratical principles, and from the wisdom of its structure continued a far greater length of time than any other. Its members, like our States, by our Confederation, retained their individual sovereignty, and enjoyed a perfect equality.’”

About the Next Installment

As suggested in the first essay in this series, I considered dedicating an installment to the Roman statesman Cato the Elder (234–149 B.C.E.) and his great-grandson Cato the Younger (95–46). I have decided against this, in part because so little of their writing survives.

Accordingly, the next two essays will focus on another, far greater figure—one of the most influential men in all of Western civilization: Marcus Tullius Cicero.

Robert G. Natelson, a former constitutional law professor who is senior fellow in constitutional jurisprudence at the Independence Institute in Denver, authored “The Original Constitution: What It Actually Said and Meant” (3rd ed., 2015).

Myths, Equality, and the NHS

With NY’s new needle law, Gotham is about to get a whole lot worse

US Underestimation of PLA Capabilities Once Again Aids Chinese Hegemony