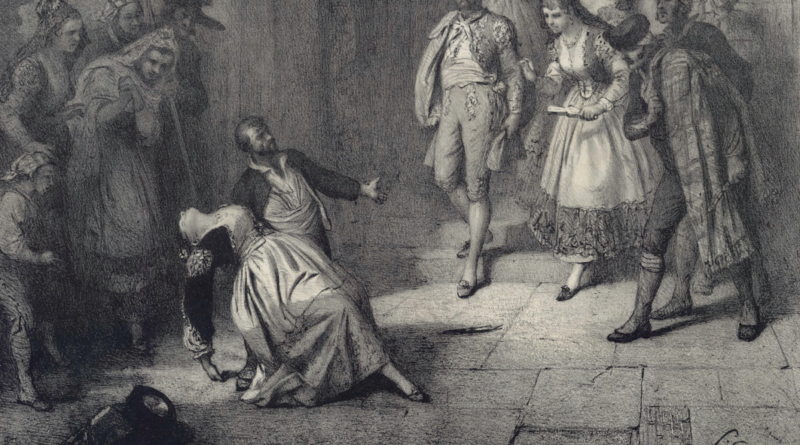 You don’t have to be an opera lover to know of “Carmen.” Written by Georges Bizet, this 1875 French opera is one of the most famous of all time. However, the story of “Carmen” did not begin with the opera. It comes from an 1845 French novella by Prosper Mérimée. The opera took the original concept, added some characters, removed others, and combined the exotic tale with magical music.

Unsurprisingly, the captivating story has found its way onto the silver screen multiple times, although often with an updated or altered setting. One of the only traditional film adaptions of this story is “The Loves of Carmen” from 1948. This wasn’t the first Hollywood movie about Carmen, since it was preceded by three silent movies; however, it was the first American talkie version.

Instead of using the famous themes from Bizet’s score, which could have pigeonholed it as an opera movie, the filmmakers decided to go back to the story’s roots from the original novella. Prominent guitar composer Mario Castelnuovo-Tedesco wrote an original score of Latin-inspired music, which occasionally hints at Bizet’s melodies.

Before becoming a movie star, Rita Hayworth, born Margarita Carmen Cansino, was a Spanish dancer with her father, who was of Spanish Gypsy descent. Those Latin roots are highlighted in this movie, since her father did the choreography, and her brother appeared as her dance partner in one scene. Despite her signature red hair, Rita clearly draws on her Hispanic heritage to bring the Spanish Gypsy to life onscreen.

In the opera, Carmen is a beautiful Gypsy who works in a Spanish tobacco factory. All the local soldiers are smitten with her, but she fancies new corporal Don José, tossing him a flower. When she gets in a fight with another woman in the factory, José is ordered to arrest her. Succumbing to her wiles, he allows her to escape, for which he spends two months in prison. After getting out, he keeps their rendezvous at a Gypsy saloon, but an altercation with a superior officer forces him to desert the military.

Carmen convinces José to join her gang of smugglers in the mountains, where his increasing hatred for the outlaw lifestyle heightens tension between them. Eventually, his childhood sweetheart, Micaëla, arrives and convinces him to go home to his dying mother. Meanwhile, Carmen takes famous bullfighter Escamillo as her newest flame. It isn’t long before José confronts her outside the bullfight. When Carmen refuses to come with him and mocks his proclamations of love, he stabs her in a passionate rage, fulfilling her prediction that a lover would kill her.

The opera was based on Part III of the novella, eliminating the author’s meeting with Don José in the earlier parts and the final section’s commentary on Romani culture. What remains is José’s telling of his story when he is imprisoned, which was significantly changed. For instance, Carmen was the novella’s only prominent female character. José had no sweetheart back home, so the opera added Micaëla. It also added Carmen’s two sidekicks, fellow Gypsies Frasquita and Mercédès. While all three women act as decoys in the opera’s smuggling racket, Carmen was the only female in the novella’s gang. However, the opera eliminated a key character from the book, Carmen’s husband, another Gypsy in the gang named García. José eventually kills García in a fight and claims Carmen as his wife. This isn’t José’s first killing; he joined the military after killing a man who accused him of cheating at a game. The two male smugglers in the opera are Le Dancaïre and Le Remendado. Although Dancaïre is technically the leader, their roles are basically equal. In the novella, however, Remendado is a gang member who is only mentioned when killed. Instead of Escamillo, the bullfighter’s name is Lucas in the novella, and he is a picador instead of a matador—he and José never meet, as they do in the opera. The ending is one of the greatest differences, since José brings Carmen to a gorge for their final conflict instead of confronting her at the bullfight.

The 1948 film was quite faithful to Mérimée’s novella, yet it drew on plot condensing techniques used in the opera to keep the runtime at 99 minutes. (This is much shorter than the four-act opera, but that’s not surprising since they cut out all that singing!) Part III, the only part used in the opera, was the section the film covered. In terms of changes, José’s killing before joining the military was omitted, since he would commit enough sins during the runtime. When we first see Carmen’s fellow smugglers, the gang includes three men, Dancairo (Dancaïre), Remendado, and Pablo. Instead of Dancairo, García is their leader. Remendado gets more featured time before his death than in the book, and Pablo is a new character. Instead of fighting over a game, José and García fight to the latter’s death over Carmen, who witnesses the killing instead of Dancairo. The movie completely diverged from the book by ending with José’s stabbing Carmen outside the bullfight, as in the opera. However, instead of his pledging his love to her corpse, José is immediately shot by a soldier, having been betrayed by Pablo for the reward.

“Carmen” can hardly be considered the most child-friendly opera story. Those familiar with Hollywood’s film content standards during the Golden Era may be surprised that the daring tale was attempted in 1948. This is a reasonable reaction, since from 1934 to 1954, the major Hollywood studios pledged to make films decent for audiences of all ages. They did so by following the Motion Picture Production Code, a set of guidelines which forbade profanity, excessive violence, and glorified immorality. They were kept on the straight and narrow path by Joseph I. Breen, the head of the Production Code Administration, who advised them on what content was acceptable and what was not. If the whole premise of the Code were expressed in one sentence, it would be, “That throughout, the audience feels sure that evil is wrong and good is right.” This direct quote from the text of the Code makes it clear that it did not forbid the depiction of crime, sin, or wrongdoing. It mainly required that such wrongdoing be denounced or contrasted with correct standards of living.

During Joseph Breen’s twenty years at the PCA, not every movie was Andy Hardy or Shirley Temple fare. Some very serious, mature topics were covered during those two decades. People love to revel over Breen Era films which they believe circumvented the Code by outsmarting or outmaneuvering Joe Breen. This idea completely ignores the PCA’s very spirit. The office was not based on dictatorial rulings but a democratic give and take process. The main tools were collaboration and compromise. Rather than infantilize the movies, Code-enforcers taught filmmakers how to include complex, deep material without becoming obscene, inappropriate, or offensive. Mature subtexts weren’t PCA failures but victories, carefully worked out between studio writers and PCA employees.

“The Loves of Carmen” is a perfect example of the Code’s working in its finest capacity. This certainly doesn’t seem like the story’s children’s version or watered down “family-friendly” alternative. It’s full of passion, lust, violence, crime, jealousy, and murder. The brilliance is that nothing is explicitly shown onscreen. Facial expressions and clever dialogue tell the whole story, much of which is written between the lines. Carmen’s seductive sensuality is so powerful yet so subtle, expressed mainly by her eyes, playful glances, and the perfect blend of grace and brashness which characterizes all her movements. Her dancing never includes vulgar or suggestive movements, yet her impish smile and castanet work speak volumes.

The most obvious Code touch is the clarification that Carmen and José officially marry after García’s death. Instead of merely declaring themselves spouses, they refer to having a Gypsy wedding ceremony, and Carmen coquettishly asks José to remind her of their last name in the next scene, just to keep things legal. Whether or not they have an affair before their marriage is up to viewers to guess. The violence in this film is handled as well as I’ve ever seen in a Code film. Five principal characters are violently killed, three by stabbing, but it is never clearly shown. Usually, other characters, such as the murderer, are shown, their expressions saying it all. Modern filmmakers should watch this movie to learn how effective killings can be without any blood.

Opera on the Screen

From the “Toreador Song” to the “Habanera,” so many melodies from “Carmen” have transcended the grand opera stage and entered popular culture, especially those which were later grouped into Carmen Suites No. 1 and 2. The characters and story have also taken on a life of their own outside of the opera. The image of the alluring title character has become synonymous with a temptress, and Carmen has even become a shorthand role type for a Spanish woman, which is ironic because the character is a Gypsy rather than a Spaniard. In any event, it’s safe to say that “Carmen” is one of the most beloved and influential operas if not stories ever written.

To anyone who likes this opera’s dramatic story, learning that there is a classic movie based on the same tale is an exciting discovery. Many classic film fans have never even heard about this movie, which is surprising considering the fame of its two stars. Nevertheless, this is a masterpiece which will inspire opera singers, enchant opera fans, and perhaps appeal to those who’ve never really liked “Carmen.” It’s also a brilliant example of the Code’s power to turn mature stories which would be R-rated films today into movies the whole family can enjoy.

The US Is Sorting Itself Into Red and Blue America