The U.S. federal government’s Bureau of Economic Analysis (BEA) released its final estimates for real GDP in the fourth quarter of 2021. While the headline was practically unchanged from prior releases, there were minor alterations in some of the data details. Those details, though not earth-shattering, they do provide an important window into the big economic themes dominating 2022 already.

America’s economy is grappling with two features that otherwise seem opposed to one another. On the one hand, consumer prices have accelerated to the point they’ve become the dominant issue in every context; political, social, as well as economic. On the other, the concept of demand destruction which more and more has motivated the world’s biggest markets to brace for recession.

Not all consumer price outbursts are inflation; actual inflation is due to excessive currency, or, colloquially, money printing. Despite many years of blame and suspicion, the Federal Reserve has proved over and over again it doesn’t actually do this; or much of anything when it comes to money.

This is why when criticism of the Federal Reserve arose from its very first use of quantitative easing (QE) back in 2009, prices had never matched the inflationary predictions and rhetoric. Constant calls for the dollar’s destruction have gone unanswered for all the time in between (and even now).

By no means is this some defense of the institution; on the contrary, its deviousness has been entirely unhelpful by allowing this mistaken impression to gain currency (pun intended) in the public discourse.

In fact, that’s actually the policy! Those at the Fed really believe that if you believe they’ve printed money, even though they haven’t (QE creates bank reserves, which are limited-use interbank tokens, not money), then you’ll act upon that belief by spending, investing, or hiring expecting inflationary consequences.

Until 2021, outside of the stock market where such psychological manipulation is unblocked by reality, this pure expectations-based policy hadn’t accomplished anything in the real economy. Instead, the Fed spent more than a decade trying to hide or dismiss disinflation (and a rising dollar) even though its own balance sheet had swelled into the trillions.

Something, however, clearly changed in 2021 when consumer prices finally came alive. Did the Fed finally hit the right “money printing” sweet spot, going too far with the “printing press” to unleash seventies-style inflation?

The latest program of QE, the Federal Reserve’s sixth, began straight away during the March 2020 crisis. Yet, consumer prices weren’t fully animated until over a year later. That’s too long of a lag for raw “money printing.”

We easily find our answer instead in the BEA’s figures for real GDP. It was never the Fed; it was the feds. 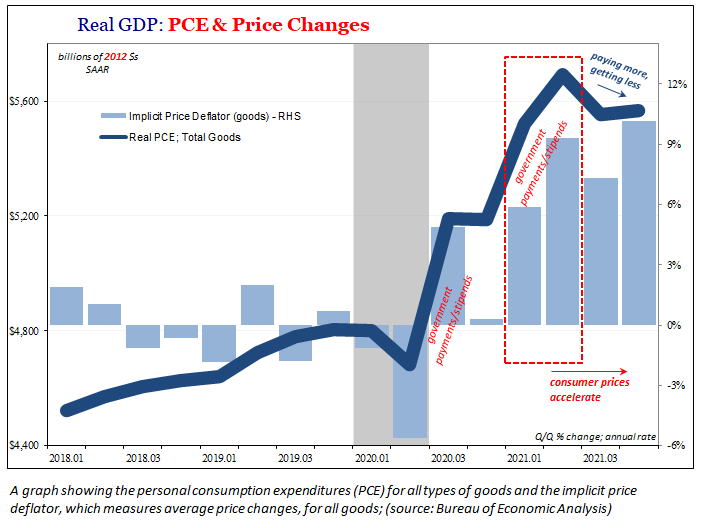 Hopped up on massive fiscal transfers, what some have (wrongly) called helicopter money, American consumers, at least those who weren’t devastated by the government’s radical overreaction to the pandemic, went on an epic shopping spree.

The first of those in the third quarter of 2020, just after the initial CARES Act transfers. During it, consumer prices temporarily corresponded.

The big leap came in the first quarter of 2021 when the final Trump Administration payment was sent out and then quickly combined with what more the Biden administration added to it.

As you can plainly see on the chart above, the effect of those was to shift demand, much of it for foreign-made goods. Locked in their homes, transfer-rich consumers went insane on Amazon.

This added most to what would become our shared economy-wide logistical nightmare; ports clogged with inbound containers full of stuff bought online and empty outbound containers that shippers weren’t waiting around to sail them back for reload in China or elsewhere in Asia.

Those issues were compounded by truckers who don’t get paid to wait around at ports (or railroad offload points), so they didn’t show up, only adding more strain to the difficulties. And the more that consumers bought, the tighter the noose on the supply chain. 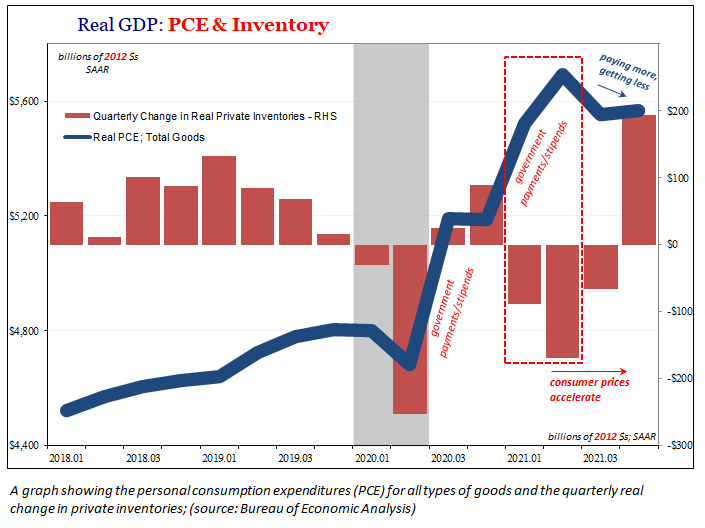 When the demand for goods really rocketed in early 2021, the myriad of supply constraints was at its worst. In the first half of last year, the aggregate level of inventory across the U.S. economy dropped by an amount equal to the first half of 2020 when the whole system was shut down.

The goods sector just couldn’t keep up making and delivering product at rates that might have better matched sugar-high consumer demand. Basic economics always shows that whenever demand is far greater than supply, the adjustment comes across as rapidly rising prices. No excessive money necessary.

Rather, a classic case of a supply shock.

The good news is that supply shocks work themselves out given enough time (and it is understandable why consumers might become angry and impatient waiting for this resolution). The bad news is how.

Eventually, consumers end up paying “too much” for basic goods, basic necessities, to the point they just can’t keep up with prices. Once they begin cutting back elsewhere, combined with a better supply and flow of goods which eventually rebounds and normalizes, prices tend to drop—but so does the economy overall.

Unfortunately, going back again to the GDP estimates, the initial stages of this sort of supply shock downside are all over them. Despite the headline growth rate of nearly 7 percent during the final quarter last year, the vast majority of it was due to the historically rapid accumulation of unsold inventories. 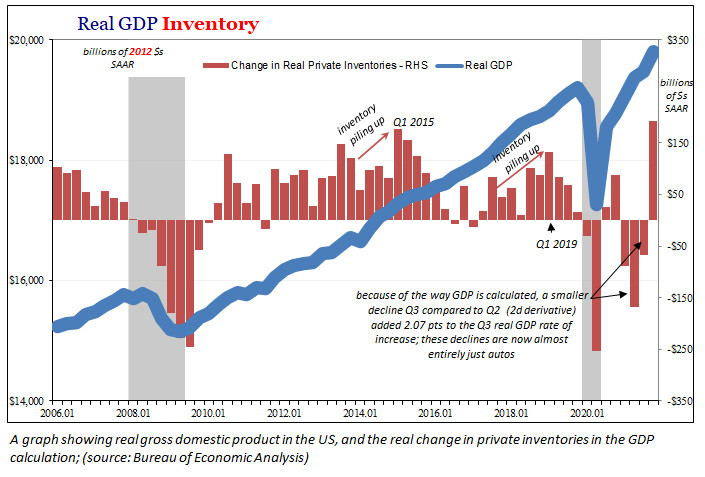 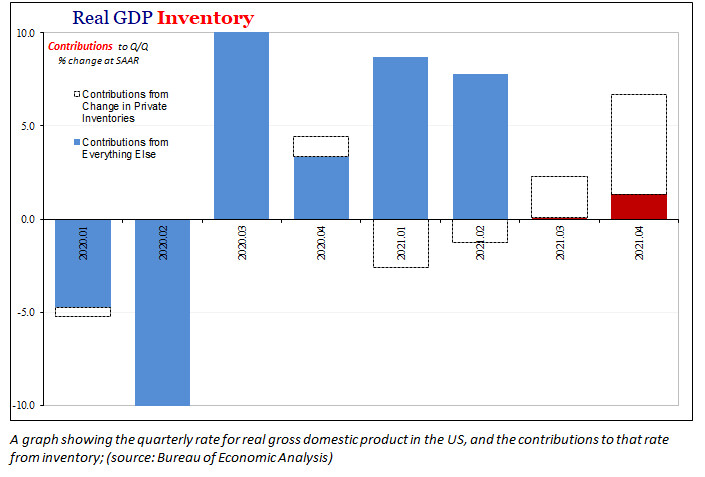 A massive flood of product has actually been building up as a much greater flow of goods (even accounting for higher prices) at a time when demand for goods from Americans is on the wane. The BEA’s data also provides a measure of just that, the final sales of goods (and services) to all American buyers, consumers as well as businesses.

Along with Personal Consumption Expenditures (PCE), final sales adjusted for prices rose at alarmingly small rates in both the third as well as fourth quarters. These would have been concerning results even before 2020, let alone for an economic system experiencing a tidal wave (and more is coming) of inbound goods trade. 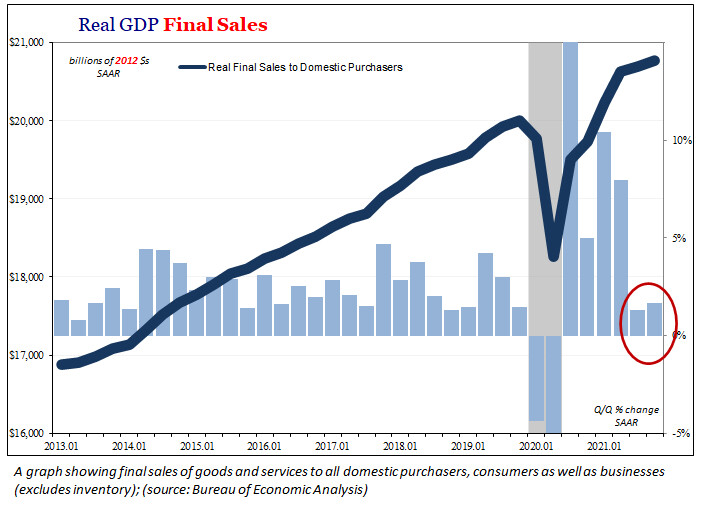 Putting everything together, the bond markets (inverted curves) aren’t concerned whatsoever about ongoing consumer price acceleration let alone inflation. What they are pricing, and have been since last year, is the Fed hiking rates for all the wrong reasons including the increasingly inevitable downside to what’s been a supply shock all along.

The possibility this includes a recession has only grown since this year began. Thus, while the hapless Fed Chair Jay Powell and the Fed advertises rate hikes as the way to tame consumer prices, the cure was contained within the affair the whole time. And thanks to Uncle Sam’s meddling, that’s very likely about to be a far bigger problem.

Jeff is the Head of Global Research at Alhambra Investments. He is not an economist, which is probably why he’s been able to develop a working model of the global monetary system. His research is unique and informative in ways an economist would never consider.

How the Supreme Court Rewrote the Constitution: 1937–1944