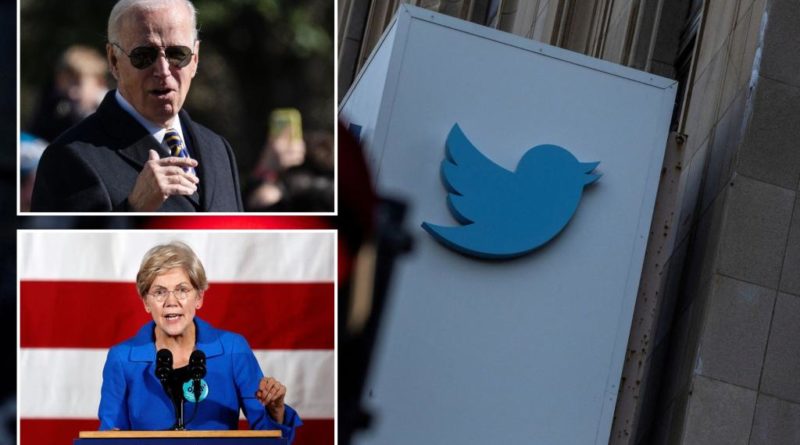 
“1984” author George Orwell warned that “if thought corrupts language, language can also corrupt thought.” That line has never been more relevant than in the aftermath of the second release of Twitter documents this week.

Calling executives the “Head of Legal, Policy, and Trust” (Vijaya Gadde) and the “Global Head of Trust & Safety” (Yoel Roth) doesn’t alter their status as some of the greatest censors in history.

Yet the license for this massive system clearly came from Twitter’s very top. Shadow banning and “visibility filtering” are consistent with the policies of ex-CEO Parag Agrawal, who pledged the company would “focus less on thinking about free speech” because “speech is easy on the Internet. Most people can speak. Where our role is particularly emphasized is who can be heard.”

So we now know that Twitter was not only banning dissenting voices on subjects ranging from COVID to climate change but was throttling or suppressing the traffic for disfavored writers.

Among those targeted was Stanford professor Dr. Jay Bhattacharya, who wrote about how COVID lockdowns would harm children. He and others have been vindicated in flagging those worries, but Twitter secretly placed him on a “Trends Blacklist” to prevent his tweets from trending. It’s a telling list because it reflects an acknowledgment that such tweets would trend with users if the company didn’t suppress them.

Some of us have been raising concerns over Twitter’s massive censorship system for years, including what I called the emergence of a “shadow state” where corporations carry out censorship the Constitution bars the government from doing.

What’s striking is leading Democrats have been open about precisely this type of corporate manipulation of political speech on social media. Sen. Elizabeth Warren (D-Mass.) called upon these companies to use enlightened algorithms to protect users from their own bad reading choices.

Even President Joe Biden called for such regulation of speech and discussions by wise editors. Without such censorship and manipulation, Biden asked, “How do people know the truth?”

It is still early to determine possible legal implications of these files, but there are some areas likely to be of immediate concern for counsel.

First, Elon Musk has suggested that some material may have been intentionally hidden or destroyed despite inquiries from Congress. Twitter was told to expect a congressional investigation into these areas.

It’s not clear if this was material allegedly deleted as part of a regular process or a specific effort to destroy evidence of censorship or throttling. Such obstruction cases, however, can be difficult to bring absent clear evidence. In 2005, the Supreme Court unanimously overturned accounting firm Arthur Andersen’s conviction for its destruction of documents under a standard record-management system.

Second, destruction of documents could also prove relevant as part of an investigation into whether false statements were given under oath. Twitter executives denied such secret suppression efforts both in public and before Congress. Indeed, a recent federal filing revealed a 2021 email between Twitter executives and Carol Crawford, the Centers for Disease Control and Prevention’s digital media chief. Crawford wanted to censor “unapproved opinions” on social media; Twitter replied that “with our CEO testifying before Congress this week [it] is tricky.”

At that hearing, social-media companies were asked about my prior testimony on private censorship in circumventing the First Amendment. In response, Dorsey insisted that “we don’t have a censoring department.” Dorsey also expressly denied under oath that there was “shadow banning” based on political ideology.

Likewise, in 2018, Gadde and Head of Product Kayvon Beykpour expressly declared, “We do not shadow ban. And we certainly don’t shadow ban based on political viewpoints or ideology.”

It turns out you don’t need a “department” if the entire company was acting as a massive censorship and suppression machine. Moreover, one “department” Dorsey did not mention was the Strategic Response Team – Global Escalation Team, or SRT-GET, that operated above what journalist Bari Weiss described as “official ticketing.” That group reportedly included Head of Legal, Policy, and Trust Vijaya Gadde, Global Head of Trust & Safety Yoel Roth, subsequent CEOs Jack Dorsey and Parag Agrawal and others.

Start your day with all you need to know

Third, there’s the growing question of censorship by surrogate. The new documents suggest the effort to control political speech went far beyond the banning or suspending of particular figures. Those highly publicized controversies like banning LibsofTikTok now appear to be the tip of a censorship iceberg with secret efforts to blacklist, throttle and suppress disfavored viewpoints.

There were even “search blacklists” to make it difficult for people to link to disfavored views. Those blacklisted may revive lawsuits alleging Twitter was acting as an agent of the government in manipulating public debates and discussions.

Of course, legal ramifications will continue to be blunted by a media and administration that have overwhelmingly supported censorship. Liberal writers and officials have surrendered much in the last few years in supporting censorship and pushing blacklists of conservative figures, including Supreme Court justices.

Musk has forced citizens to take sides on the free-speech fight. He has both the public and free speech on his side. Not only are users signing up in record numbers, but a recent poll shows a majority of Americans “support Elon Musk’s ongoing efforts to change Twitter to a more free and transparent platform.”

The public is simply not buying the liberal narrative. What media figures once called “a canard” and a “conspiracy theory” is being exposed to full public view.

All the Orwellian euphemisms and cheery titles will no longer disguise Twitter’s raw censorship. Once empowered by Agrawal to determine “who can be heard,” Twitter executives showed how censorship can become an insatiable appetite for speech controls. Sitting in the San Francisco headquarters, the “Trust” officials found an array of conservative views unworthy to be heard. The “filtering” of free speech quickly became a choice on what views are worthy of attention.

After all, if you cannot trust “Trust” professionals, who can you trust?

Jonathan Turley is an attorney and professor at George Washington University Law School.

President Biden is a fool who’s fooling himself