I think the same words could apply to the American foreign policy establishment in the 45 years since another Jimmy, surnamed Carter, reacted against the Kissingerian Realpolitik of the previous eight years by founding his own foreign policy on preaching about “human rights” and international law to the rest of the world.

That Jimmy was always better suited to being a parson than a president, so we can understand his way of looking at things. More of a mystery is why it persists, decades after he left office in 1981—and not only in America’s foreign policy establishment, but in both Democratic and Republican parties today.

Here, for instance, is the headline on an op-ed in the Feb. 24 New York Times by the old State Department hand and current president of the Council on Foreign Relations Richard N. Haass: “The West Must Show Putin How Wrong He Is to Choose War.”

The Russian dictator is guilty, it seems, not of invading and presumably conquering a neighboring country, but of wrongthink in supposing that it was OK for him to do that.

In other words, there’s not a lot we can do about the invasion itself. Apart from token gestures by the U.S. and NATO allies, poor old Ukraine is on its own. But we can put Mr. Putin on the naughty step, with economic sanctions and international shunning, to reflect on what a bad boy he has been.

If we keep preaching at him à la Jimmy about the violation of international norms, maybe he can eventually be made to see the light.

There’s a first time for everything.

The sad thing is that we might have done something about the invasion if we’d started doing it decades ago, at the end of the Cold War, by disbanding NATO instead of expanding it eastwards. That might not have worked either, of course, but it would have denied Mr. Putin his pretext for invasion and given us some leverage with him by the threat of reconstituting an anti-Russian alliance in Eastern Europe—a threat that couldn’t have been any less of a deterrent than is the current largely moribund NATO.

But, no, we’re all about preaching to people about how they need to get their minds right and be more like us. Don’t they know that we could never be wrong to choose war?

Oops. As Mr. Haass acknowledges, we did that too—not so long ago.

Nowadays, Carterism is called virtue-signaling, at least by those of us who oppose it, and it is applied not just to foreign policy, but to everything. Both foreign and domestic matters have to be explained, in the first instance, by identifying who are the good guys and who are the bad.

It is in vain for us anti-virtue-signalers to protest that the world isn’t like this. Political choices are almost never between good and evil, but virtually always between the greater and the lesser evils. It’s often difficult to decide which is the greater and which the lesser, it’s true, but it is impossible when you think not in comparative but in binary terms—not, that is, in terms of evil vs. evil but, as the media do, of evil vs. good.

Thus the Biden administration, with the help of the clueless but even more determinedly moralizing media, has chosen Russia over China as the principal bad guy in the world, mainly because it is easier to cast Vladimir Putin in the role of evil dictator than it is President Xi, though a sober assessment of the two nations’ strengths and weaknesses would recognize the Chinese as by far the greater threat to U.S. interests and allies.

And, as a result, Mr. Biden and his media acolytes have done as much as anybody to bring about the current rapprochement between the world’s other two superpowers, who now jointly as well as severally see us as the bad guy against whom their missiles and other weapons are to be turned.

This is the alliance which Farah Stockman, in another New York Times op-ed, rightly says was feared by Richard Nixon and Henry Kissinger when their opening to China did so much to make concerted action by our two biggest potential enemies impossible for a generation. “A generation of peace,” Nixon called it, to the ridicule and disgust of the media and the Democrats for whom he was the bad guy.

Is it likely that Mr. Putin would be acting as he is in Ukraine in the absence of that alliance? And is it just possible that the alliance itself has been brought about as a result of our treating him as the world’s biggest bad boy, whom we constantly scold and occasionally impose sanctions upon, but are never prepared to do anything about if it costs us anything?

In the Feb. 23 New York Times, Bill Clinton’s secretary of state, Madeleine Albright, gave a perfect illustration of what’s been wrong with American foreign policy for nearly half a century by writing of Mr. Putin’s “warped worldview” in seeing Ukraine as a part of Russia.

What she means is that it’s quite different from our own worldview. By calling it “warped,” she recurs to the American diplomat’s default setting of self-righteous moralizing—and moralizing which never, ever accomplishes anything against those whom we wish to bend to our will.

Let me be clear. We don’t have to agree with Mr. Putin’s theory about Ukraine as part of Russia, but we do have to recognize that it is the operative diplomatic fact in this case, and that if he chooses to put the theory into practice, there’s nothing we or the Ukrainians can do to stop him.

If we hadn’t long since given up any leverage we might have had with him by turning him into a cartoon super-villain in order to satisfy the media’s need for a morally black-and-white diplomatic world, things might have been different.

Of course the armchair warriors urging the Ukrainians to fight to the death for their country, so long as it doesn’t cost them anything, will call any more conciliatory approach to the evil dictator “appeasement.” But it can’t be any surprise that they see no difference between Mr. Putin and Hitler, when they couldn’t even see the difference between George W. Bush or Donald Trump or name-your-favorite-Republican-“fascist” and Hitler.

It’s all moot anyway at this point. But one lesson we should have learned is that, if it’s the devil’s own job to get Vladimir Putin’s mind right, it’s no easier a task when it comes to America’s media and foreign policy establishment.

James Bowman is a resident scholar at the Ethics and Public Policy Center. The author of “Honor: A History,” he is a movie critic for The American Spectator and the media critic for The New Criterion.

Congestion pricing is a disaster but still coming to NYC 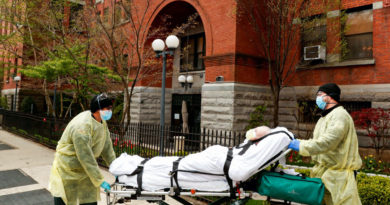 The Absurdity of Let It Rip

The Blowback Is Finally Here