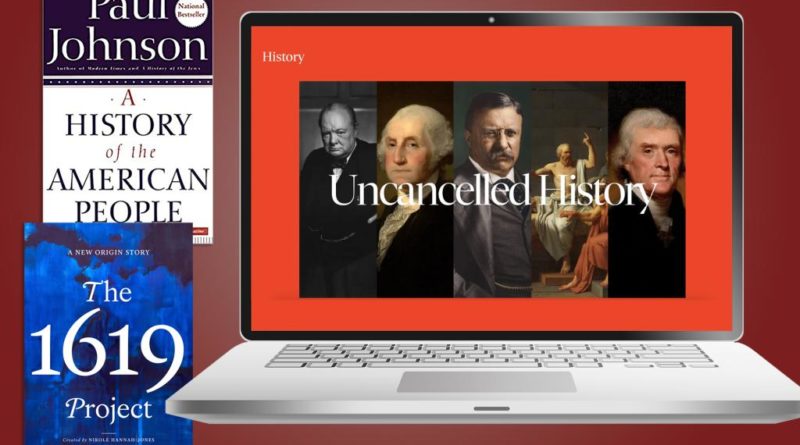 When I first moved to the United States I did what any new arrival should do. I read about the country. And the first book I chose was Paul Johnson’s “A History of the American People.” Published 25 years ago, it has a memorable opening line: “The creation of the United States of America is the greatest of all human adventures.”

Just one thing that struck this then new arrival was that 25 years later it would be almost impossible for a book about this great country to begin with such a positive line.

Even in the period I have been here I have seen the whole story of this country turned on its head. A country that used to feel good about itself is being taught to feel bad about itself. A country which has done such a power of good in the world has been told to consider itself a great force of evil in the world. Almost everything in the American story has been turned on its head. With a quite deliberate intent.

For instance, we hear much about the propaganda of the “1619 Project.” Yet such initiatives cannot even be described as pseudo-history. They are mere propaganda exercises. An attempt to turn the story of America into a story of original sin, slavery and much more.

What is worst is that they have done this to our nation’s heroes. Every single one of them.

So earlier this year I decided to try to make my own small effort at hitting back. I do not have the resources of the New York Times at my disposal, but I got a team of the best young technicians and researchers and put together a list of the American figures who have been most maligned in recent years. I am sorry to say the initial list was very long. It would have been easier to create a list of American heroes who had not been lied about in recent years.

But in the end we decided to focus on the absolutely central figures. The Founding Fathers, Christopher Columbus, Abraham Lincoln, Teddy Roosevelt and more. Throughout the course of this year I have been sitting down with some of America’s — and the world’s — leading historians to fill in the gap of ignorance that has been deliberately inserted into American society.

We called it “Uncancelled History” and you can listen to it on all podcast channels and watch each hour-long episode for free on YouTube among other places. I hope it will be a great learning resource. I am very proud of the results.

For instance speaking to the great Jefferson scholar Jean Yarborough, she told me things about Jefferson that I doubt one in a million Americans know. For instance we have been told for 30 years that Jefferson took sexual advantage of his inherited slave, Sally Hemings. The evidence was said to be conclusive.

Not so, says Yarborough, who sat on the commission that looked into the DNA evidence in the 1990s. As she showed, one of the most base claims against Jefferson would be chucked out if it had ever come into a court of law. The reputation of this most extraordinary man has been completely unfairly maligned. And even Monticello — which is meant to preserve the great man’s legacy — has gone along with such calumnies.

Historian after historian came up with similar nuggets of truth. But what struck me most was something that came up when I asked each historian why this is happening now. Why would anyone want to attack all of our heroes? Why would they want to wage war on these of all people? The answer was given by the Lincoln scholar I spoke with, Andrew Fergusson. Loving Lincoln, he said, is a way of loving America. And so hating on Lincoln is a way of hating on America.

There is a great truth in there. That the people who are warring on the reputations of our great founders and heroes are in fact trying to deliberately dismantle this country: hero by hero. These critics want to say that there is nothing good about us, that we never were good and that the whole thing was rotten from the start. If you want to push that agenda you can push it fastest by trying to pull down all the idols of the country.

Well it is time that Americans pushed back against this. It is something I am trying to arm people to do, in my own small way. I think this country is an extraordinary place. If I didn’t then (like millions of others) I would never have made my way here. But America is amazing not by accident, but by design. It is time we understood that design, and paid due reverence to the designers themselves. Because we have not just something — but everything — to be thankful to them for.

Stanford’s woke words won’t protect you from the world

Stanford University made some headlines this week with the news that they the latest people to try to rewrite the English language. According to the university´s authorities, certain words are “harmful” and need to be replaced.

For instance “immigrant” should be replaced by “person who has immigrated.” Which is a distinction with absolutely no difference. “Grandfather” should apparently be replaced with “legacy.” So if you see you grandfather over Christmas be sure to say “Hey legacy.” I’m sure that’ll cheer him up. Oh and you are also not meant to use the words “American” or “brave” because we have to placate the cowardly community. A community that many academics at Stanford certainly know something about.

But I have a question for the bods who think this is a good idea. Let’s say we get rid of all the harmful words. What, then, are you going to do about the harmful world? If you think that coddling students from “harmful words” is going to protect them from the deeply harmful world out there then I fear Stanford graduates are going to be in for a shock, and are likely to ask for their money back.

Violent Crime Is Now a National Epidemic—Who Should We Blame?

Gov’t idiocy at work, FDA’s dumb plan on smokes and other commentary