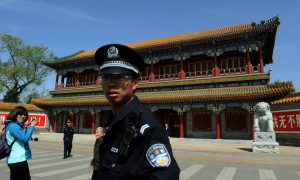 Shi served in the National People’s Congress, the Inner Mongolia region, and the provinces of Jilin and Heilongjiang. He was transferred to Jiangxi province in 2007 and held various positions, including deputy governor of Jiangxi province, member of Jiangxi Provincial Party Standing Committee (JPPSC) and secretary of Ganzhou Municipal Party Committee (GMPC), and vice chairman of SCJPPC. He retired in January 2018, was investigated on Sept. 21, 2020, and was expelled from the CCP and transferred to the judiciary authorities for review on March 28, 2021.

While serving as a member of JPPSC and secretary of GMPC from October 2010 to July 2015, Shi was at the peak of his power and of his greed for money and sex.

At the end of 2019, three entrepreneurs—Zeng Yiping, Wen Hekui, and Wang Yufei—reported to the Central Commission for Discipline Inspection under their real names that Shi had extorted huge amounts of money from them, including 20 million yuan ($3.1 million) worth of gold and 132 million yuan ($20.2 million) in cash transferred to the designated accounts. The letter was accompanied by invoices or transfer records. The whistleblowers signed each page of the letter in their own handwriting with their fingerprints.

In March 2011, Zeng’s father was arrested by local police while doing rare earth business in Ganzhou. Afterward, Shi asked Zeng to meet him in Beijing, where Shi said, “Your father has got himself in such a big trouble that it takes 50 million yuan ($7.7 million) to set things right.” Zeng said he had just started his job and needed to wait for his father to get out to raise money, but could not raise that much. Shi was silent for a while and said, “Then let your father out first, but at least 20 million yuan is needed.”

By selling their family assets and raising debts all over the place, the Zeng family finally raised 20 million yuan, which was given to Shi in the form of gold.

Zeng’s father was then released but was given a suspended sentence. Shi had promised to return all the seized rare earth assets but ended up only returning half, making the other half worth 30 million yuan ($3.6 million) gone without a trace.

Another whistleblower, Wen Hekui, said, “I did not use his power to make a penny, but was extorted more than 100 million yuan ($15.3 million) instead. There were at least 100 people in his interest group. For all that much land in Ganzhou during his tenure, basically, several million yuan per acre must be paid to his interest group members, plus additional money paid for large and small projects. Shi amassed for himself at least tens of billions of yuan.”

The amount extorted from the above three people alone added up to more than 170 million yuan ($26 million). For the nearly six years Shi was in charge of Ganzhou, how many people were blackmailed, and how much money was extorted by him? What all the CCP’s corrupt officials have in common is that they get themselves promoted regardless of how corrupt they are. How much did Shi extort and accept bribes along the way from Jilin to Jiangxi province?

Shi also has a unique sexual obsession. According to mainland media reports, Shi repeatedly raped his own niece, who had worked in his house since she was 16, during his tenure in Harbin, the capital of Heilongjiang province. He also raped one of his brother’s daughters. Shi had sexual relationships with his wife’s two nieces, Yang Yuhua and Yang Yurong, who then became his full-time mistresses. In addition, Shi had numerous part-time mistresses, kept several stewardesses, and fathered a few illegitimate children.

One person who knows what it was like during Shi’s tenure in Ganzhou said, “In southern Jiangxi province, his girlfriends are everywhere … He is interested in not only female cadres but also the wives of male cadres. He likes to say to the county governors and county party secretaries below him: bring your wives along to dine out together. There are indeed male cadres who desperately want to get promoted and really let their wives serve Shi. There used to be a county party secretary’s wife who had been seen walking with Shi daily.”

The relatives of Zhong Bingming, the former party secretary of Dingnan county in Ganzhou, repeatedly said in an interview with China Economic Weekly, “I can’t express in words how vicious he is; this is a person who is worse than an animal.”

According to China Economic Weekly, a person familiar with Ganzhou’s political situation said that when Shi was the party secretary of Ganzhou city, he was like an emperor of the city, requiring everyone to be absolutely obedient to him. “Anyone who did not obey him would be punished severely. All officials felt like under a white terror in Ganzhou.”

Shortly after Shi took office in Ganzhou, he had the deputy directors of the five main bureaus in the city write out the five favorites and the five most hated by the former party secretary. Afterward, he drew a clear line by excluding and suppressing all his predecessor’s old “cronies.”

In addition, Shi instructed Ma Yufu, the head of Ganzhou’s Political and Legal Committee, to spend more than 30 million yuan ($3.6 million) on listening devices to surveil key officials under his command, including the then-mayor of Ganzhou, Leng Xinsheng.

According to Ganzhou officials, Shi’s tyranny reached “an outrageous level,” turning southern Jiangxi province into a “kingdom” of his own.

While Su Rong was Secretary of Jiangxi Provincial Party Committee from 2007 to 2013, Shi served as vice governor of Jiangxi province among other positions.

According to the Chinese outlet “Honesty Outlook,” Shi was so determined to climb up the ladder that he strove to please his boss Su and became the cash cow of the Su family. Under the protection of Su, Shi lived a life like a “king of southern Jiangxi.”

For example, according to jiemian.com, Su’s son at one time approached the governor of Shangyu county through Shi, and explicitly requested that the county’s land consolidation project be given to Jiangxi Hengfan Land Development and Consolidation Company. After the deal was closed, the company gave Su’s son 12 million yuan ($1.8 million) in return.

In another example, in 2012 Su’s wife wanted to buy a molybdenum mine from a private mine owner in Anyuan county of Ganzhou city at a significantly low price. Shi instructed Kuang Guanghua, then party secretary of Anyuan county, to help close the deal, which eventually fell apart because the gap in price was too great to bridge between the two sides.

Shi was very displeased with Kuang over his failure to close the deal. As a result, he accused Kuang of illegally participating in rare-earth mining and accepting huge bribes, and told him to either crash himself into a wall and die, or run away, or be jailed for life.

Jiangxi is the home province of Zeng Qinghong, a former member of the Politburo Standing Committee of the CCP and vice chairman of the State Council. Zeng is considered to be the chief leader of the “Jiangxi Gang” of the CCP.

Su Rong, Shi’s boss and then-secretary of the Jiangxi Provincial Party Committee, was promoted by Zeng himself. On Jan. 23, 2017, Su was sentenced to life in prison for taking more than 116 million yuan ($17.7 million) in bribes and another 80 million yuan ($12.2 million) in property that could not be accounted for. All 14 members of Su’s family were involved in the case.

As the chief gang leader, who the 10 senior officials of the “Jiangxi Gang” all relied on, is Zeng Qinghong a chief corrupt official himself?

Let’s take a look at just one revealing example.

On March 7, 2008, Zeng Wei, son of Zeng Qinghong, bought a mansion in Australia for 250 million ($38.2 million). At the time of the transaction, there was no loan and it was paid in full in one lump sum. Afterward, Zeng Wei applied to the Sydney city government to spend another 38 million yuan ($5.8 million) to knock down the mansion and rebuild it. The purchase and renovation of this one mansion alone would cost a total of 288 million yuan ($44 million). Has Zeng Wei used his father’s powerful position to make his unlawful fortune funding his lavish spending?

Since Xi Jinping began his anti-corruption campaign against the CCP’s high-ranking corrupt officials in January 2013, more than 500 senior officials at the deputy provincial level and above have been investigated and punished, most of whom were promoted by Jiang Zemin, the former CCP head, and Zeng Qinghong, Jiang’s chief crony. It is perfectly safe to say that they both are the root cause of the CCP’s most serious corrupt elements.

Does Xi dare to punish both Jiang and Zeng by bringing them to justice?

Wang Youqun graduated with a Ph.D. in law from the Renmin University of China. He once worked as a copywriter for Wei Jianxing (1931–2015), a member of the CCP Politburo Standing Committee from 1997 to 2002.

Parents DO deserve a say in what their kids are taught

The Politicisation of Domestic Violence in Australia

Journalists in Ukraine pay the ultimate price for revealing war