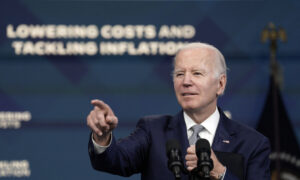 In 1974, when the inflation rate was 11.04 percent, President Gerald Ford came up with a slogan: “Whip Inflation Now.” WIN buttons were manufactured by the millions and people were asked to wear them to demonstrate grassroots solidarity to combat the economic scourge. The campaign was later described by Martin Crutsinger in an Associated Press story titled “Ford’s WIN buttons remembered” as “one of the biggest government public relations blunders ever.”
Today the inflation rate is 8.5 percent, up from 7.9 percent in February and the largest year-over-year rise since 1982. The biggest difference, though, is in the price of goods. In 1974, gas prices averaged 53 cents a gallon and a gallon of milk cost $1.34. Who needs to be reminded of the soaring cost of these and other necessities today, even when adjusted in 2022 dollars?
…

Joe Biden flying too close to the son

As subway horrors continue, Adams must push Hochul to act on crime