If you have a look at the ads the Democrats are running to ensure their dominance over California politics, that isn’t subtle either. They are mudslinging as hard as they can, and it works, because it has always worked.

In every quasi-competitive race, examples of Democrats wielding both overwhelming spending supremacy and underhanded campaign tactics are plentiful. For example, in Assembly District 7, Democrat Ken Cooley has raised $1.6 million, while his opponent, Republican Josh Hoover has raised $650,000. And money talks.

In a barrage of mailers and television ads, Cooley claims Hoover “stands with extremists who want to outlaw abortion with no exceptions for victims of rape and incest,” and that Hoover “has spent his entire career working for extreme, far-right politicians” and “helped them echo and advance Donald Trump’s dangerous agenda.”

As for Hoover’s alleged association with “extreme, far-right politicians,” this is an inaccurate portrayal of Hoover’s previous bosses, Kevin Kiley and Mimi Walters, who are both measured politicians with impeccable character. Cooley, on the other hand, is a machine politician who once worked for Ron Calderon, a Democratic politician who spent 3.5 years in prison after being convicted of accepting bribes.

When it comes to top offices, the financial advantage Democrats wield over Republicans is laughable. Newsom’s campaign account had a Sept. 24 balance of $23 million, 53 times as much money as Brian Dahle, the Republican challenger, whose ending cash balance was $408,000.

You can’t win campaigns with no money, and California’s Republicans have almost no money. It’s a bad joke, more so as the Democrats use all that money to portray themselves as weak underdogs, fending off Trumpian hordes.

The race for Assembly District 40, another close one, is a rare case where there is near parity in contributions. Republican Suzette Valladares, perhaps benefitting from incumbency, has raised $912,000, only slightly behind her Democrat challenger Pilar Schiavo at $1.02 million. But have a look at the dirt Democrats are throwing on the Republican:

“The incumbent is a Republican who traffics in Trump’s Big Lie. Valladares opposes the right of women to decide when they will become a parent. She also takes credit for blocking CalCare, which would have expanded healthcare coverage to all Californians.”

Unpacking these allegations is a representative excursion into the Democrat strategy: If you have any concerns about voter integrity, you are participating in “Trump’s Big Lie.” If you have any concerns about aborting six month old healthy fetuses with no restrictions, which is California law, you are against a woman’s “right to choose.” And if you don’t want to see the state government take over the entire health care system—and nobody has the slightest idea how that would be implemented—you are against providing health coverage to all Californians.

The vacuous absurdity of these allegations ought to be self evident. When pigs fly, the California Legislature will do anything that truly jeopardizes a woman’s right to choose an abortion. California’s health care system already has layers of coverage beyond what Obamacare offers, and it isn’t going anywhere. As for voter integrity, a successful Democratic political consultant and expert on the California voter file recently told me, laughing as he said it, that the file is a joke, rife with inaccuracies. He would know. But if anybody cares about voter integrity, just call them a conspiracy theorist, and move along.

While corporations donate substantial sums to the Democrats—because Democrats win and wield power—the corporate agenda is balkanized. They want access and they have specific and disparate priorities. Not so with the government unions. They have an unwavering common agenda: more government, more government workers, higher pay for government workers. Any politician that challenges that agenda is targeted via a unified union effort and is defeated. With that power, of course, government unions now control all policy decisions in Sacramento and throughout California.

California’s public sector unions collect and spend nearly $1.0 billion per year. They donate hundreds of millions every election cycle to political campaigns, and almost every donation is to a Democrat. If they make donations to Republicans, it is in the handful of safe Republican districts where they want to make sure they control the Republican.

With hundreds of millions to spend every year on politics, California’s government unions are everywhere. It’s easy enough to go to the California Secretary of State’s website and see who is contributing to the campaigns for Governor, other high offices, the senate and assembly candidates, or the ballot initiatives. But government union influence only begins there. It extends into every city and county, every special district and every school board. There is not one race in California where government unions aren’t interested in the outcome, so long as the successful candidate will then be in a position to “negotiate” over pay and benefits for public employees. And if that were all, that would be bad enough.

Unfortunately, the agenda of government unions is increasingly in alignment with the broader economic agenda of California’s business oligopolies and major individual donors. They share a common interest in creating scarcity through excessive laws and regulations. The enhanced enforcement apparatus means more jobs for public sector workers. The new regulations mean more barriers to entry and more expensive compliance requirements for smaller emerging companies that lack the scale to withstand the new rules. And the politically contrived scarcity, in all things, means higher demand-driven revenues and more profits for those corporations left standing.

This is the world that a virtually unassailable coalition of special interests in California has created. To protect their empire, they massively outspend Republican candidates, using their cash advantage to dirty them all as racists and climate deniers. It works.

Are Republicans Up for Election Really Frightened of Donald Trump? 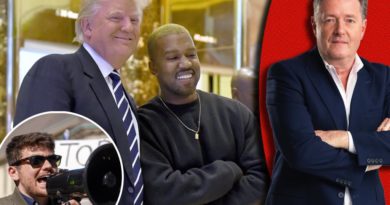 The GOP must ditch anti-Semite embracer Trump — or lose 2024