They used to say that when you stayed at a Holiday Inn the big surprise was no surprise. You pretty much knew what to expect and you usually got it.

The 20th National Congress of the Chinese Communist Party (CCP) was the “Holiday Inn” of CCP political happenings. We knew what was going to happen, often months in advance, and it pretty much came off as planned. Xi Jinping was reaffirmed as head of the CCP, winning an unprecedented but not unexpected third five-year term (the rumors that circulated a few weeks ago that Xi had been deposed in a palace coup were obviously a fiction).

As a result, Xi will rule with nearly unchecked power for the next five years, maybe even longer.

The only dramatic incident during the entire five-day event was when an obviously bewildered Hu Jintao, Xi’s predecessor, was abruptly and unceremoniously escorted from his privileged place next to Xi. Xi ignored him like a mobster refusing to look at his right-hand man as he is led away to get whacked.

Xi’s goals for China’s armed forces, as laid out at the National Congress during his wearisome 108-minute speech, were also nothing new. “We will innovate the guidance of military strategy, develop strategies and tactics of people’s war, build a strong system of strategic deterrent forces, raise the presence of combat forces in new domains and of new qualities, and deeply promote combat-oriented military training,” he said.

Xi added that Beijing “will intensify troop training and enhance combat preparedness across the board, strengthen all-around military governance, and consolidate and enhance integrated national strategies and strategic capabilities.”

Altogether, Xi mentioned “security” at least 80 times in his speech. But none of the so-called details are particularly novel.

China has been engaged in a concerted and aggressive effort to modernize PLA since at least the late 1990s. Much of the first two decades of this undertaking consisted of a dual-track (“double construction”) approach that embraced both “mechanization” and “informatization.”

“Mechanization” called for the general upgrading of existing equipment, at the same time that newer generations of conventional weapons were also introduced. “Informatization,” meanwhile, meant a longer-term transformation of the PLA along the lines of the information technologies-led “revolution in military affairs” (RMA).

The ultimate goal of this mechanization/informatization process was for the PLA to “fight and win informationized wars.” According to the U.S. Defense Department, this means using “information during a conflict to conduct joint military operations across the ground, maritime, air, space, cyberspace, and electromagnetic spectrum domains.”

This phase of mechanization and informatization is supposed to have been completed by 2020. Now, according to China’s 2019 defense white paper (the latest version available), the PLA is in the midst of a second phase to “complete the modernization of national defense and the military by 2035,” including the “modernization of military theory, organizational structure, military personnel, and weaponry and equipment.

Moreover, by the middle of the 21st Century (generally interpreted to mean 2049, the 100th anniversary of the founding of the People’s Republic of China), the PLA expects to “fully transform” itself into a “world-class force.”

So Xi was not exactly plowing new ground when it came to laying out the future course of the PLA. That said, it is critical to note a couple of facts.

First, there is no faction—either within the CCP or the PLA—for pausing or even slowing the modernization of China’s armed forces. The entire country, in fact, is pretty much united behind the idea of turning the PLA into an advanced military force—and spending the money to make it happen. So don’t expect to see anyone willing to put his or her head on the proverbial chopping block to oppose higher defense budgets or new weapons programs.

Second, even as the PLA labors to adopt “informationized warfare,” it is already planning for the next phase of its modernization, which it has termed “intelligentized warfare.” This would entail the militarization of the so-called fourth industrial revolution—artificial intelligence (AI), big data, autonomous unmanned systems, 5G networking, and the like—in order to create new dominant military-technological advantages, particularly over the U.S. military.

As China’s 2019 defense white paper puts it, “war is evolving in form towards informationized warfare, and intelligent warfare is on the horizon.”

While there is no opposition to the plan, achieving this level of intelligentization in the PLA is a daunting task, and China could easily miss its 2049 goal. That being said, no surprises, but still, pretty frightening.

Richard A. Bitzinger is an independent international security analyst. He was previously a senior fellow with the Military Transformations Program at the S. Rajaratnam School of International Studies (RSIS) in Singapore, and he has held jobs in the U.S. government and at various think tanks. His research focuses on security and defense issues relating to the Asia-Pacific region, including the rise of China as a military power, and military modernization and arms proliferation in the region.

How Putin’s ‘Doctrine of Chaos’ aims to tear Americans apart

A White House kowtow to Beijing and other commentary 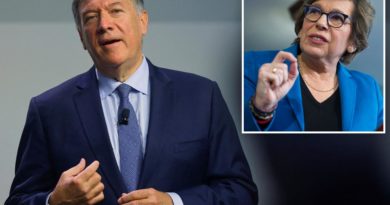 I challenge Randi Weingarten, the most dangerous person in the US — to debate me