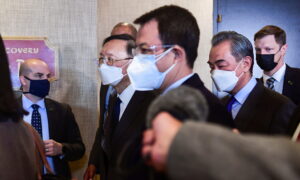 During the U.S.-China talks in Alaska on March 18 and 19, Yang Jiechi, a member of the CCP’s Politburo and director of the Foreign Affairs Office, gave a tough speech to U.S. Secretary of State Anthony Blinken’s team. In his speech, there were several paragraphs on “international order,” which were key and revealed a lot of information.

In the talks between Blinken and Yang Jiechi on the 18th, the U.S. side’s purpose was stated right at the beginning, with two paragraphs being the most crucial.

Blinken began by referring to the world system, emphasizing a “rules-based international order.” “The alternative to a rules-based order is a world in which might makes right, and winners take all. And that would be a far more violent and unstable world for all of us,” he said.

Blinken added that the United States wanted to discuss “deep concerns with actions by China, including Xinjiang, Hong Kong, Taiwan, cyber-attacks on the United States, [and] economic coercion toward our allies.”

“Each of these actions threatens the rules-based order that maintains global stability,” he said. “That’s why they’re not merely internal matters, and why we feel an obligation to raise these issues here today.”

In other words, the United States is raising these issues to the CCP because what the CCP does is not just a matter of the Chinese regime’s internal affairs, but a matter of global stability. If every country that has the power does what the CCP does, then the world may become one in which might makes right and winners take all.

This could also be interpreted as the reason why the Biden administration held the talks with the CCP after Biden took office. He wanted to warn the CCP face-to-face once again that, if it wants to stay in the Western-dominated world order, it must change its behavior, otherwise it will destroy the whole system.

What Yang said at the end of his 17-minute speech is exemplary of the CCP’s insolence.

“I don’t think the overwhelming majority of countries in the world would recognize that the universal values advocated by the United States or that the opinion of the United States could represent international public opinion, and those countries would not recognize that the rules made by a small number of people would serve as the basis for the international order,” Yang said.

The “United Nations-centered international system,” as Yang Jiechi calls it, refers to the fact that, after decades of currying favor with the United Nations, the CCP now leads four of the 15 United Nations agencies and has begun to set international norms and standards that are led by the Chinese regime. For example, in air navigation, the International Civil Aviation Organization is now led by a CCP representative; the CCP’s secretary-general of the International Telecommunication Union, who took office in 2015, supports Huawei. About 30 U.N. agencies and organizations have signed memoranda of understanding in support of China’s Belt and Road Initiative, including the United Nations Industrial Development Organization.

In other words, the CCP has begun to implement its own set of rules and order by controlling various U.N. organizations and redefining international order. Yang Jiechi’s words tell the U.S. side unequivocally that the CCP will no longer abide by U.S. international standards.

What the talks have shown so far is that there is no consensus between the two sides on this most critical aspect.

After taking power earlier this year, the Biden administration’s strategy toward the CCP can be divided into three parts, which are “competitive, collaborative, and adversarial,” as expressed by Blinken in his remarks during the high-level talks in Alaska in March, which have been designed to strike a balance among the three elements.

In other words, when Yang Jiechi personally told Blinken that the CCP would not follow the United States’ rules in the future, it created serious consequences. The rules-based competition of Biden’s strategic triangle with the CCP will be severely curtailed in the future.

The CCP has been developing its economy and military in a way that violates rules and order, and the United States is unable to compete with the CCP in many areas for various reasons. When “competition” is substantially diminished, it could be inferred that the United States and the Chinese regime will cooperate less and less.

Let me give you another example. In the South China Sea arbitration case, after The Hague-based Permanent Court of Arbitration (PCA) ruled in favor of the Philippines, the CCP’s former top diplomat Dai Bingguo referred to the then-pending ruling as “nothing more than a piece of waste paper,” saying that no country “should implement the award in any form.” If we follow Yang Jiechi’s so-called international order, what will happen in the future is not whether the ruling of the international court can still be binding to the CCP, but that the CCP will probably bring a group of Beijing-friendly countries of the United Nations to discuss the legality of the existence of the PCA itself.

Perhaps realizing that Yang’s remarks had gone too far, the Xinhua News agency issued a report on March 20 summarizing the talks, declaring that “China has no intention of interfering with the United States political system or challenging or replacing the status and influence of the United States.”

In any case, Yang Jiechi’s rebuttal of the United States’ international order in the face of the U.S. delegation, coupled with the CCP’s internal talks on the rising East and the declining West, is believed to have greatly impacted the Biden administration and broken Biden’s balanced strategic triangle with China. Even if Biden wants to ease relations with the CCP, there is not much room left for maneuvers in his Chinese policy.

The Biden Administration Is Changing

The U.S.-China talks in Alaska are symbolic.

On the one hand, Yang Jiechi’s performance of “looking at the world on a level playing field” (meaning the CCP views itself as now equal or even higher than the West), a quote from Xi Jinping at this year’s top CCP national sessions, has shocked the U.S. government. At the same time, it also made European countries warier of the CCP. In the future, Western countries will be more united when they deal with the CCP.

What the CCP is doing now is validating some of the claims emphasized by former U.S. Secretary of State Mike Pompeo. At the G7 summit held in March last year, Pompeo reportedly urged the G7 leaders to refer to the coronavirus as “Wuhan virus” in an attempt to hold the CCP accountable for the virus, as “the Chinese Communist Party poses a serious threat to the health and lifestyle of Americans.” He said in an interview with Mark Levin of Life, Liberty & Levin in September 2020 that “the greatest external threat to the United States is the Chinese Communist regime.” On Jan. 12, 2021, Pompeo tweeted that “ the biggest threat to @UN integrity and international human rights is the CCP’s effort to pervert norms.”

One of the two senior administration officials at a briefing on March 16 said that with the CCP “we’re going to be looking at deeds, not words,” adding that the United States had a “very clear-eyed view about the People’s Republic of China’s pretty poor track record of keeping its promises.”

On the other hand, Yang’s move will leave the CCP with less room to maneuver in future diplomacy and will make it more likely to cause friction between the CCP and other countries.

Linyi Li is senior editor and commentator at the Chinese Epoch Times focused on China and international affairs. Prior to this he was a journalist in Ottawa, Canada, focused on Parliament Hill news.

Take on the teachers union and veto the class-size bill, Gov. Hochul

DeSantis is more appealing than Trump to independent voters