A 13-year-old boy was driving the pickup truck that collided head-on with a minibus on Tuesday, killing six students of a New Mexico university, their head coach, and both occupants of the pickup truck, authorities said.

During a Thursday news conference, the vice-chairman of the National Transportation Safety Board (NTSB), Bruce Landsberg, said a preliminary investigation revealed that the pickup truck had a spare wheel in place of its left front tire, which was blown out before impact, causing the truck to swerve in front of the minibus.

The fiery crash killed nine people in total, including six members of the University of the Southwest (USW) men’s and women’s golf team and their head coach Tyler James, who just entered his first season.

The young teen who was driving the pickup truck was identified as Ricky Siemens, who along with his father, Heinrich Siemens, were among the nine victims, The Daily Mail reported. Ricky and his father were headed to pick up a new car when they got involved in the accident.

“They were going to pick up a car that [Heinrich] bought. I was supposed to see him about two hours later,” the heavy-hearted widow, Agatha Siemens, said.

The pickup truck crossed into the opposite lane on the darkened, two-lane highway before colliding head-on with the van. Both vehicles burst into flames.

Landsberg said investigators hoped to retrieve enough information from the vehicles’ recorders, if they survived, to understand what happened. He said many in the van were not wearing seatbelts and at least one was ejected from the vehicle.

Only two golfers survived the crash, 19-year-old Dayton Price and 20-year-old Hayden Underhill, who are both listed in stable condition, officials said. Both were taken by helicopter to Lubbock, about 110 miles to the northeast.

“They are both stable and recovering, and every day making more and more progress,” USW Provost Ryan Tipton said on Thursday. “One of the students is eating chicken soup,” he added, calling their recovery “a game of inches.”

The NTSB sent an investigative team to the crash site in Texas’ Andrews County, about 30 miles east of the New Mexico state line.

Texas law requires motorists to be at least 15 of age to receive a provisional license and at least 14 to start taking classroom courses for a learner’s license.

Suspect Charged in Death of University of Chicago Student

Gov. Hochul Acknowledges ‘We Still Have a Problem’ When Pressed on New York’s Crime Crisis 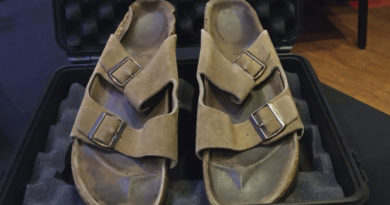