Fourteen states are urging the Supreme Court to reject a lower court’s ruling that a new congressional electoral map approved by Alabama’s legislature last year be returned to state lawmakers for redrafting because it supposedly disadvantages black voters.

The move comes after a three-judge panel of the U.S. District Court for the Northern District of Alabama issued a preliminary injunction Jan. 24 against John Merrill, Alabama’s Republican secretary of state, temporarily forbidding him from conducting any congressional elections in the state, as The Epoch Times previously reported.

Alabama’s delegation to the U.S. House of Representatives currently consists of six Republicans and one Democrat.

The district court ruling at issue was rendered Jan. 24.

In a lengthy, unanimous decision (pdf) written by Manasco, the panel found Milligan was “substantially likely to establish that the [redistricting] Plan violates Section Two of the Voting Rights Act.” That section of the federal statute “prohibits voting practices or procedures that discriminate on the basis of race, color,” or membership in certain language minority groups, according to a U.S. Department of Justice summary.

The current map is unfair to black voters, the panel determined.

“[U]nder the totality of the circumstances … Black voters have less opportunity than other Alabamians to elect candidates of their choice to Congress,” Manasco wrote.

The state legislature must draw up a new map and as it does, “it should be mindful of the practical reality, based on the ample evidence of intensely racially polarized voting … that any remedial plan will need to include two districts in which Black voters either comprise a voting-age majority or something quite close to it.”

The panel gave the legislature until Feb. 11 to approve a new map, failing which the court will provide “an eminently qualified expert to draw on an expedited basis a map that complies with federal law for use in Alabama’s 2022 congressional elections.”

In its application (pdf) to the Supreme Court, Alabama argues the Constitution “cannot tolerate” the “perversion” of the Voting Rights Act the district court demands.

“The court’s order is contrary to the promise of the Equal Protection Clause. The injunction is premised on the noxious idea that redistricting begins and ends with racial considerations.”

The “court-ordered redraw marks a radical change from decades of Alabama’s congressional plans,” the application states. It would lead to a map “that can be drawn only by placing race first above race-neutral districting criteria, sorting and splitting voters across the State on the basis of race alone.”

“In a sample of more than two million race-neutral maps generated by [respondents’] own experts, not even one contained two majority-black districts,” according to Alabama.

“The injunction leaves the State with no choice at all. The State can replace its lawfully enacted congressional district plan with a racial gerrymander and suffer the consequences of follow-on litigation … [o]r the State can cede its redistricting power to the district court, which will hire a third party to redraw districts that segregate Alabamians in Mobile and elsewhere by race.”

Jeff Landry, the Republican attorney general of Louisiana, argues in the friend-of-the-court brief (pdf) filed with the Supreme Court on Jan. 31 that the district court’s decision is in conflict with the high court’s 2006 ruling in League of United Latin American Citizens (LULAC) v. Perry. In that case, the court held Texas was not justified in creating a district that spanned 300 miles from Austin to the Rio Grande Valley to connect two different Latino communities.

If the district court ruling stands “Alabama has violated the law by not drawing the slimmest of majority-minority districts and connecting Mobile with Eufala—more than 200 miles apart.”

“States need clarity,” he writes. “Over the last decade, this Court and the lower courts have consistently told legislatures that race cannot predominate when they draw representative districts.”

The Epoch Times reached out for comment to the two attorneys, Leah Camille Aden and Deuel Ross, listed in the Supreme Court docket as counsel of record for the respondents, but had not received a reply from either one as of press time. Both work for the NAACP Legal Defense and Educational Fund Inc.

Katabella Roberts contributed to this article. 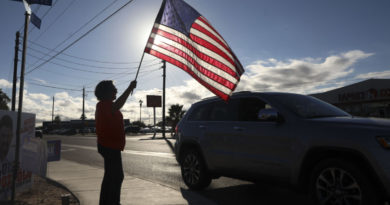