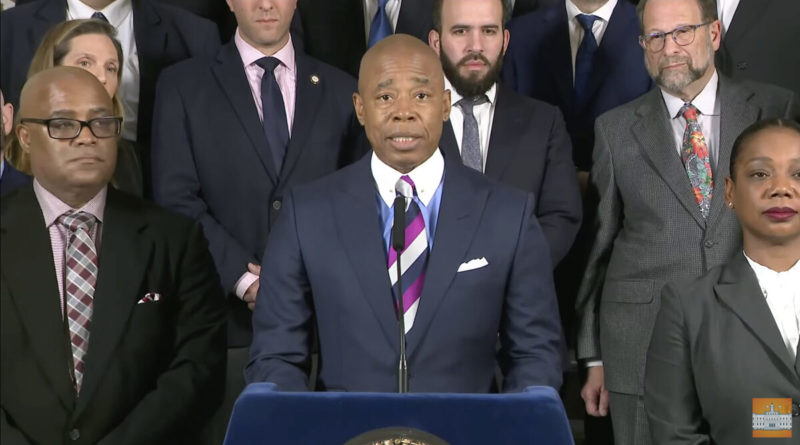 “This was not an idle threat,” Adams said at a news conference where he was joined by officials from the FBI, the Metropolitan Transportation Authority, and other agencies involved in the arrests early Saturday of Christopher Brown and Matthew Mahrer on charges including criminal possession of a weapon. The men were arrested at New York’s Penn Station after authorities spotted the posts.

“This was a real threat,” he said.

According to the criminal complaint against him, Brown made a series of threats on Twitter including, on Thursday, “Gonna ask a Priest if I should become a husband or shoot up a synagogue and die,” and then on Friday, “This time I’m really gonna do it.”

Authorities linked the tweets to Brown, of Aquebogue, on Long Island, and identified Mahrer, of Manhattan, as an associate, said Michael Driscoll, head of the FBI’s New York office.

A description of Brown, 21, and Mahrer, 22, went out to law enforcers, and two MTA police officers spotted the two at Penn Station late Friday and arrested them, police said.

Brown had a large military-style knife, a ski mask, and a swastika arm patch when he was arrested, authorities said.

Brown, who was charged with making a terrorist threat in addition to the weapons charges, told police that he runs a white supremacist Twitter group and Mahrer is one of his followers, according to the complaint.

“I have Nazi paraphernalia at my house. I think it is really cool,” Brown told police, the complaint said.

Brown said he and Mahrer met at St. Patrick’s Cathedral before buying a gun because he “wanted to get the blessing,” according to the complaint.

Both men were arraigned in Manhattan criminal court over the weekend and are due back in court on Wednesday. Federal charges against them could be filed at a later time, Driscoll said.

Phone messages seeking comment were left with attorneys for Brown and Mahrer.

Adams, a Democrat and a former police officer, said threats against Jewish people or any other group must be taken seriously.